On July 1, 2018, a new pedestrian bridge was opened in Astana. The new bridge is a gift from the Akimat of Atyrau Oblast for the 20th anniversary of the capital.

According to the plan of engineers and architects, this bridge will provide communication between pedestrian flows and the bicycle network of the park zone and the embankment of the right bank of the Yesil River.

The outer shell of the bridge resembles fish scales — the symbol of the Atyrau region; the decorative structure of the bridge consists of 2,450 aluminum petals, each of them has a unique shape. When you go inside, you will feel as if you are inside a big fish.

As the representatives of the developer told us, the outer shell of the bridge consists of triangular-shaped aluminum cassette panels creating protection from precipitation and safety. In the central part of the annular gathering is meant the location of public space, made in the form of a tent-canopy of diamond-shaped figures.

The bridge is designed in the style of biotech – is when organic natural forms are used in architecture. On the shell of the bridge – the pattern “flower of life”, which meets the Fibonacci law, also known as the golden ratio.

From the coast with a park and an amphitheater on the bridge there is a monument to the Caspian sturgeon, symbolizing Atyrau.

The total length of the pedestrian bridge is 313.5 meters, width – 10.5 meters. The construction includes a six-meter pedestrian lane, a three-meter bike path, a security strip 0.5 meters wide and two lanes 0.5 meters each for the installation of a rail barrier. Metal construction weight – 1 920 tons. The bridge is covered with litacryl. On both sides of the bridge, on each embankment of the river, steles were installed with the inscription “Atyrau kopіrі” (“Atyrau Bridge”). 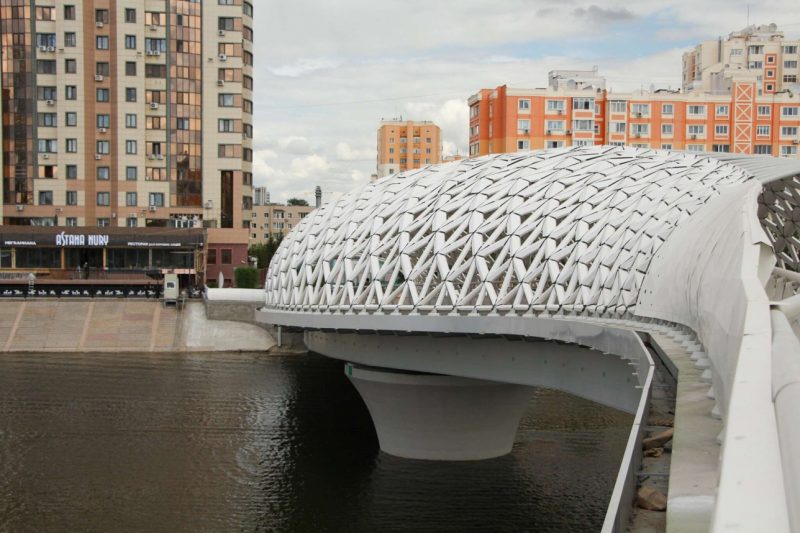 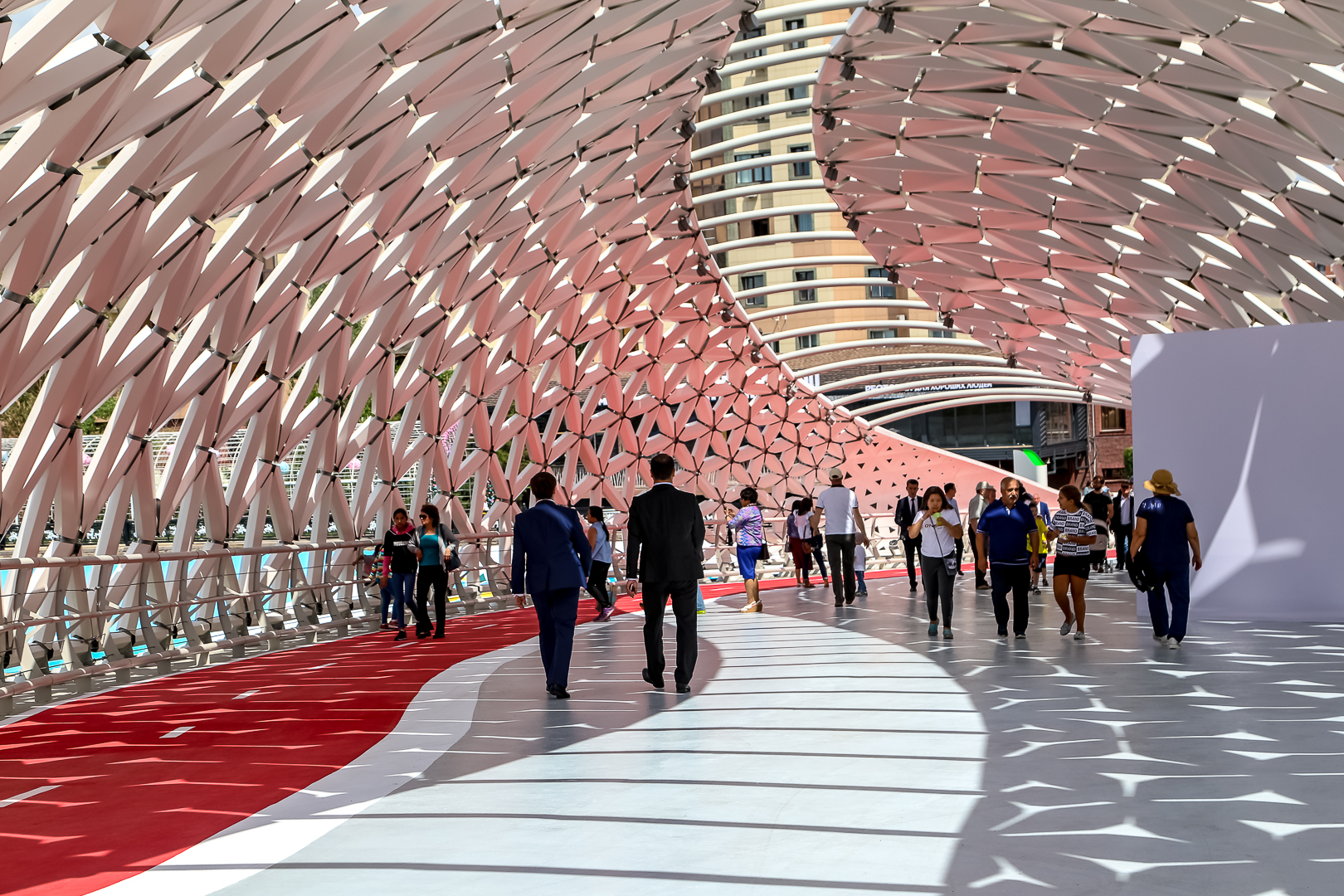 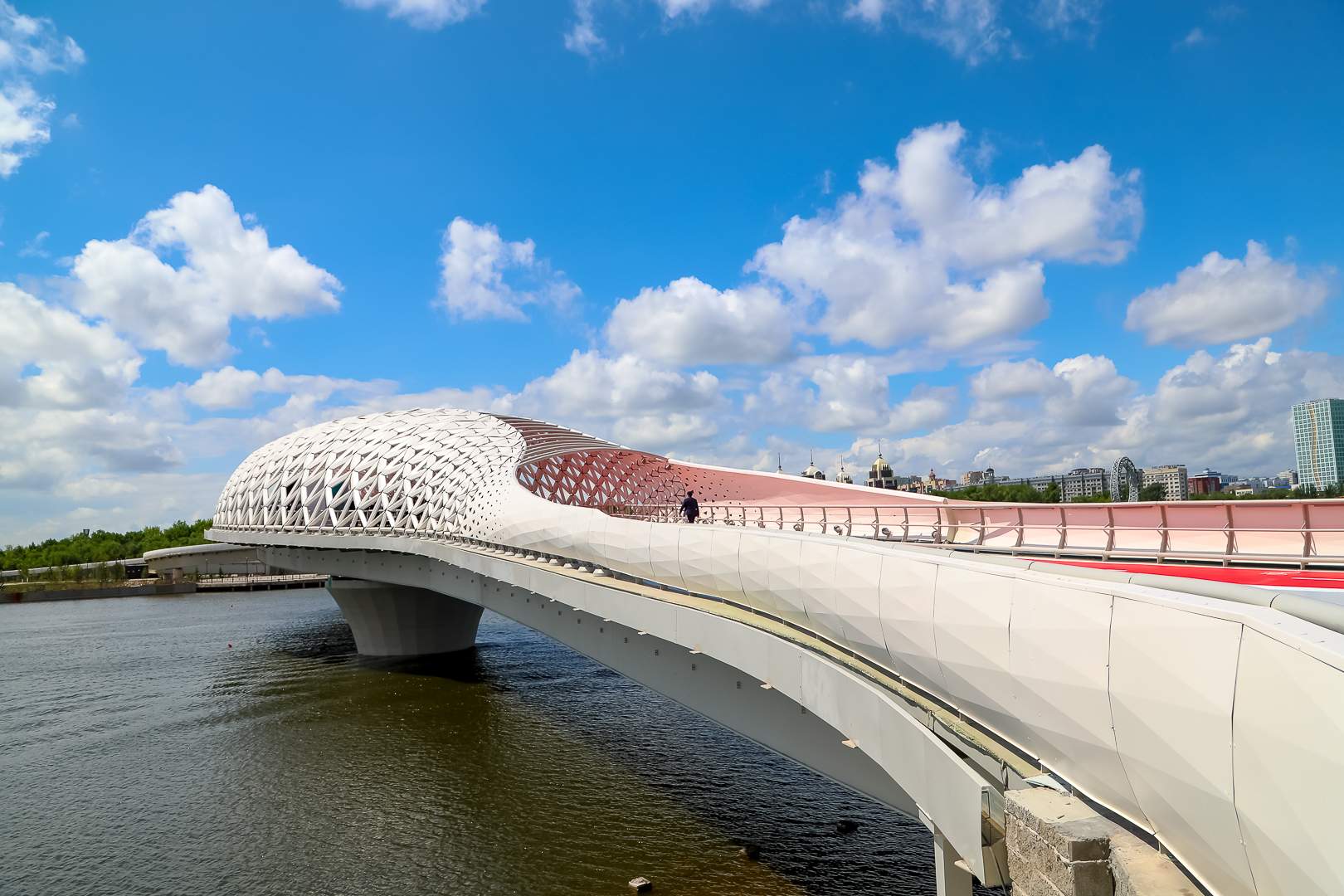