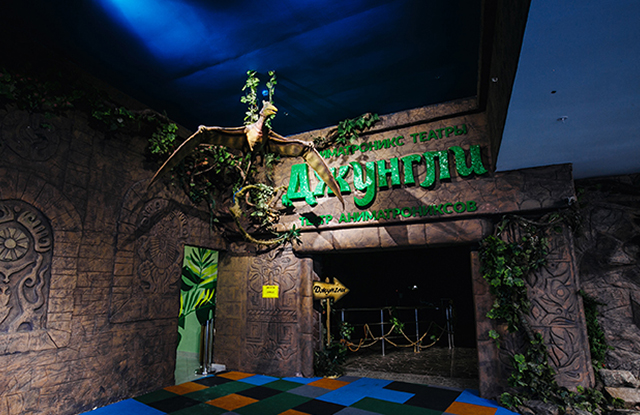 The idea of creating a one-of-a-kind dinosaur Park belonged to the first President of the Republic of Kazakhstan, N. A. Nazarbayev. The opening of the dinopark took place on July 6, 2008 – the day of the capital (Astana), it was on this holiday that the “Jungle” first opened its doors to visitors.

The dinosaur Park in Nur-Sultan has become a unique project that has no analogues in the CIS. It wonderfully combines theatrical performances and an exciting journey through the depths of the jungle with robot dinosaurs and water slides.

Animatronics robots for dinopark were developed and created in Kazakhstan by the domestic company “Kazakhstan Salyut”, the chief designer of the machines was Vadim Gostev. This fact makes the attraction even more unique, because for the first time animatronics were created on the territory of the Republic.

Park animatronics “Jungle” offers you to plunge into the atmosphere of the impenetrable jungle and walk among the huge prehistoric animals. Dinopark in H became the largest project of the Republic, recreating all the beauty and mystery of the jungle. Exciting adventures in the lost world that you could watch in Hollywood movies are now available to absolutely everyone. The mysterious world of the jungle will charm and captivate You from the first minutes. Experienced guides and animators will give you a fun, interesting and informative tour of the mysterious dinosaur Park, with its prehistoric inhabitants, along the way telling stories that have come to us since ancient times.

Dinosaurs, triceraptors, tyrannosaurs, primitive tribes – the entire atmosphere of the dinopark is imbued with the exciting spirit of the jungle, plunging into which You will forget about everything in the world, and believe that the presented reality is real.

Located in the building of the RC “Ailand”, dinopark occupies more than 3000 m2 of area, which is densely populated with various inhabitants of the flora and fauna of the wild jungle.

At the entrance to the animatronics theater, you will be met by a huge stone face of an ancient deity, which will come to life before Your eyes and, mesmerizing with its magical gaze, will lead You into the thickets of the jungle. After passing through the gap, You will find yourself in a real cave. Here you will be met by a huge spider with a lot of giant and furry paws,which will not miss the opportunity to scare You, around it has already gathered a lot of small spiders, they are about to crawl to You. Going further, You will come across two huge 5-meter crocodile waiting for their prey on the Bank of the river. As you walk across the bridge, you will come across giant frogs and the mythical Gorgon, dancing merrily to incendiary music.

A narrow passageway opens Up a new cave, where the eye of the Cretaceous king – a Tyrannosaur, a huge monster, more than 3.5 meters tall, is consecrated by lightning flashes. An unforgettable experience will leave you with the giant figures of Gorillas and Triceratops. After climbing the bridge, you can watch the life of the Pterodactyl and Diplodocus from a height. Special attention of tourists is drawn to the cave of stalactites, stalagmites and precious stones. And thousands of bats are already hiding under the cave’s vaults. You will pass over a rickety and rattling bridge overhanging the crater of the volcano. All your way is accompanied by the singing of birds and the roar of invisible animals. At the end of the trip, You will find yourself in an abandoned and mysterious city of ancient civilizations, where theatrical performances will unfold on the stage of an ancient amphitheater.

Animatronics theater affects not only children, but also adults. Having come here once, I want to repeat the fascinating journey many more times! 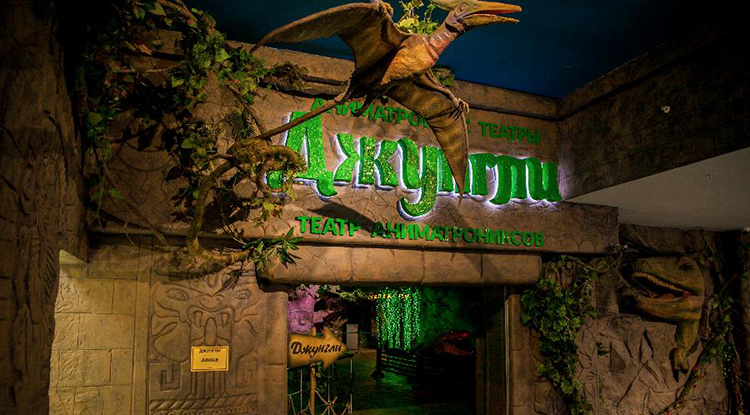 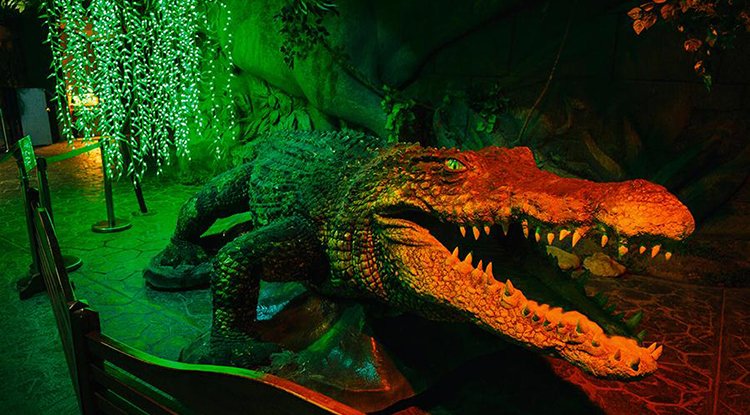 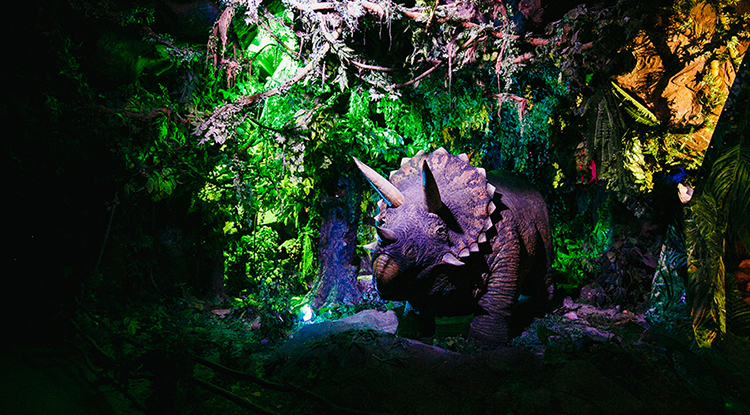