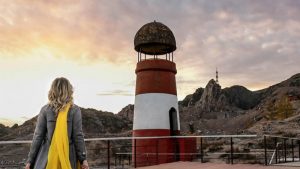 “The view is like in Portugal”. A new place for photo shoots has been found in Kapshagai

A new place on the bank of the Kapshagai reservoir is gaining popularity among tourists. This is an old observation deck, which reminds someone of Portugal, and someone-places from the work of Alexander Green “Scarlet Sails”. In this article, we will tell you why fans of photo shoots tend to take pictures here.

Umit Bektursyn, a resident of Kapshagai, shared one of the first photos in social networks. According to her, the general view of the abandoned and old lighthouse creates a special atmosphere for photo shoots in these places. This structure also serves as an observation deck: you can climb up and enjoy the view of the blue expanse.

“The lighthouse is located on a private territory. The entrance fee was 500 tenge per person. The place is perfect for an unusual photo shoot. If the surrounding area and the lighthouse itself are improved, then in the summer you can enjoy, swim and sunbathe nearby, ” she shared.

Alexandra Basova, signing a photo from this place, remembered the heroine of the story of Alexander Green Assol, who was waiting on the seashore for her beloved, who should come for her on a ship with scarlet sails.

Another girl writes that she and the young man had a very cool time together, admiring the spectacular views. And these photos will now always remind you of those wonderful moments.

Viktor Pasternak, a photographer from Almaty, visited the lighthouse in the winter.

“We always passed it on the way to the beach and thought how cool it would be to stop. This time we stopped, and for good reason. Just look at how cool it is. Although this is not even a lighthouse, but just a stylized observation tower on an abandoned recreation center. I have not seen so many lighthouses in my life (not one), so it was amazing for me to see, and even more so to climb it. I really want to visit it again in the summer, ” Viktor said.

In the comments, users are surprised “All my life I lived and did not know that there is such a place on the Captcha”, “What a beauty!”, “Awesome!”, “The view is like in Portugal”, “I want a photoshoot”, “Class”.

And this is how the lighthouse looks at night.

Someone staying in this place prompted philosophical reflections.

“I do not know who this beacon shines on, but there is a certain sign that we are not alone in this vast world. That somewhere there is a force that cares about us, about our well-being and a happy return home, ” the tourist writes in her post.

The head of the Department of internal policy of the city of Kapshagai Musagitov Sagynai told what this structure is and how it appeared.

“This is a private territory of the tourist base. The building was built around 2009. It used to serve as a lighthouse. The owners of the territory often went along the reservoir to the Ili River and, returning at night by boat, found their shore by this lighthouse. Now the building is more decorative,” he said.

The lighthouse is located on the bank of the Kapshagai reservoir. You can’t drive up to it by car. But it can be easily found by walking from the road. After the police post on the highway, you need to immediately turn right.