“I sit on the Sports Car, I go out on the Arboretum. The history of a unique children’s train in Shymkent

Imagine that you have a whole train that could take you from the city center to a picturesque park. You will drive along one of the main arteries of the city, through a tunnel and over a bridge, rumbling merrily along the railway. Music plays in the cabin, you are full of emotions and in anticipation of arriving at the final station. Kids are chattering merrily around you, and your parents are sitting next to you. You are seven years old. This is how weekends and holidays were spent for any child who grew up in Shymkent (now the third megalopolis of Kazakhstan – Shymkent).

CityPASS Kazakhstan invites you to take a ride with us through the history of the children’s railway in Shymkent and find out what is remarkable about six kilometers of a rare narrow-gauge road.

The Shymkent Children’s Railway was named after Hero of the Soviet Union Gani Muratbayev. It was built in 1980 as a pioneer railway. This is a kind of trend of that period.

Soviet philately devoted a series of special stamps with drawings of children to this topic.

A Soviet postage stamp dedicated to the International Year of the Child. one thousand nine hundred seventy nine

The road itself, as well as the transport, was designed and built by volunteers. The road is narrow-gauge, with a width of 750 millimeters and a length of about six kilometers. 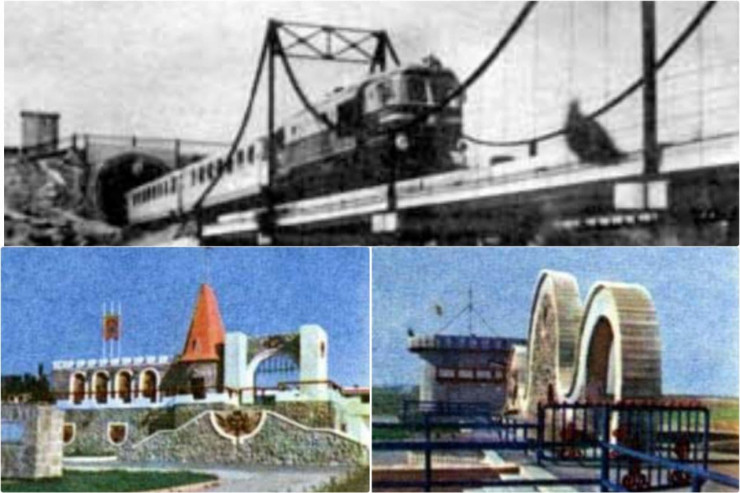 The train station was designed by the design Institute “Uzhgorerot”, and tunnel and bridge – Institute “Riproposto”. For the architecture of the station, they were nominated for the Lenin Prize. Tulpar station resembles a funny camel, which for some reason has the face of a lion cub, although in fact tulpar is a winged horse from the works of Kazakh folklore. 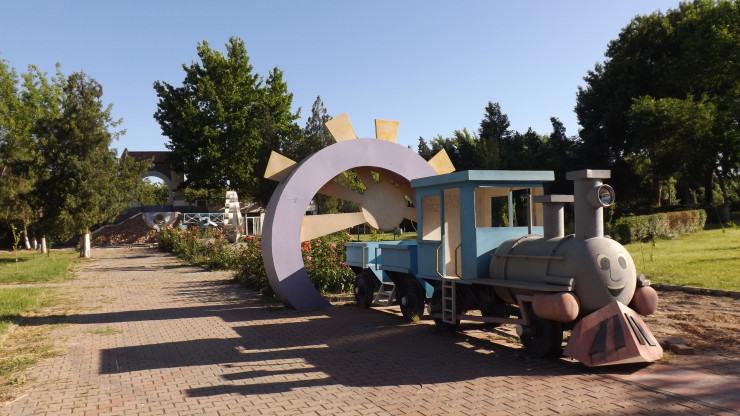 The first train left in February 1980, and in May of the same year, the railway began to operate regularly. In the period from May to September, 176 thousand passengers used it. The route has a complex profile in height: immediately after passing the bridge, there is a slope of almost two kilometers with two sharp turns and a tunnel of about 25 meters long. 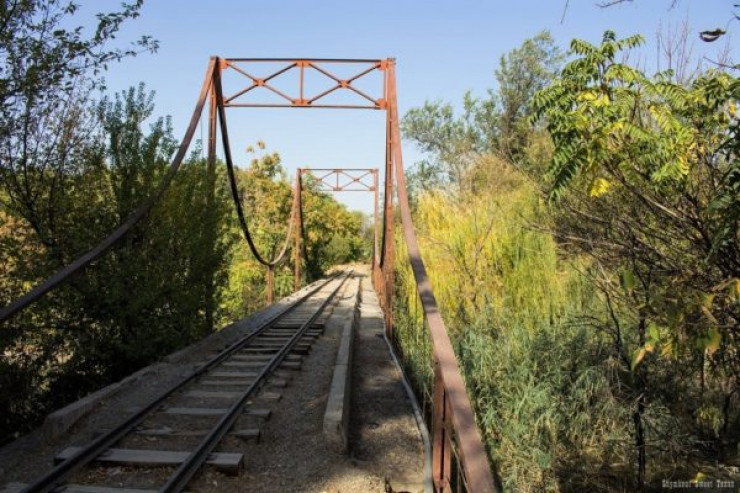 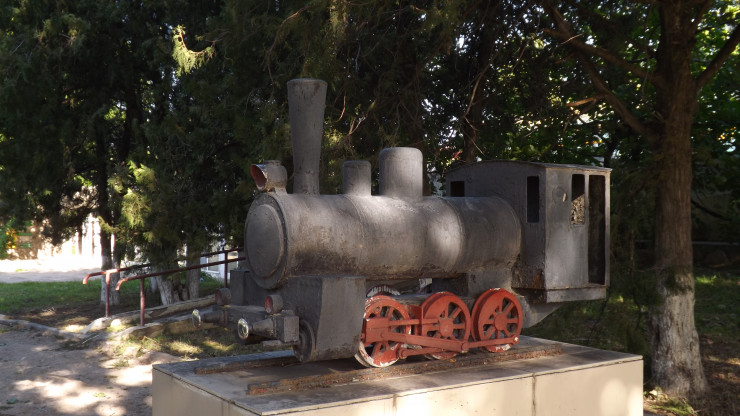 The Children’s Railway had to be closed several times due to problems with the repair of the locomotive. In the twenty-first century, the train was more idle than operated. In the mid-2010s, it was resuscitated at the expense of charity funds, but after a short use, the children’s train finally stopped at the depot. 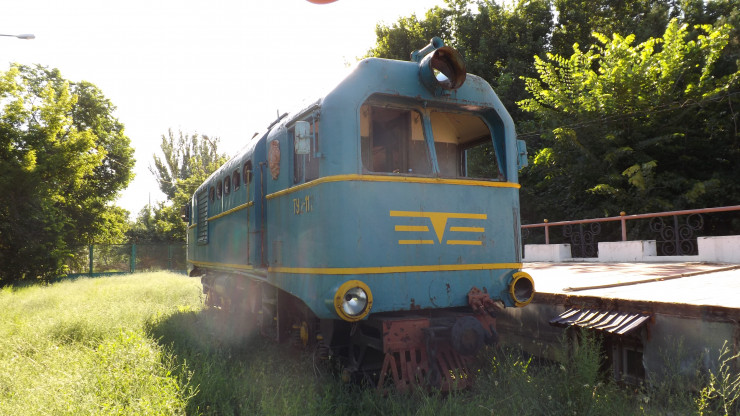 So, where could the children’s railway have brought them? Initially, it was almost the only way to get to one of the most popular places of citizens – the Shymkent arboretum.

The Arboretum Of Shymkent

In the year of the launch of the children’s train in Chimkent (in those years, the name of the city was written exactly like that), an arboretum was also opened. In the northernmost part of the city at that time, there was a huge park the size of half of the Principality of Monaco. Over 600 varieties of Eurasian trees and plants were planted there. This place is still the largest and most popular park in the third metropolis.

The arboretum was built in 1980 on the site of a former landfill. Now pheasants and turtles live in the forests of the park. And in the center is a lake where swans, ducks and geese live. The arboretum is a must-visit destination for most newlyweds.

The arboretum contains some of the architectural symbols of Shymkent, such as the huge entrance arch, the terminus of the former children’s railway and the 142-meter cascade waterfall “Kingdom of Love”, which runs from the fountain to the lake.

Shymkent Dendrological Park has the status of a protected natural area of local significance. The entrance price is 21 tenge.

The Terminus of the children’s train

But back to the railroad. Young railway workers stopped studying and working on the road in the 1990s. However, it was decided to keep the narrow-gauge railway for passenger traffic from the city to the recreation area. In 2002, the road did not work, the rails on some sections were stolen. In 2003, the movement resumed.

In 2004, it was announced plans to expand the territory of the recreation area “Tulpar” and increase the length of the narrow-gauge railway by several kilometers-both in the recreation area and in the city, due to the construction of a section from the Sportivnaya station to another city park-named after Abai. In June-July 2005, traffic on the narrow-gauge railway was resumed. One and a half million tenge was allocated from the budget for repair and restoration work. But about a month and a half after the opening of the movement, passenger traffic was stopped.

Since 2006, it has been possible to establish regular operation of the Shymkent children’s Railway for three summer months.

On September 5, 2008, a total photo documentation of the line from beginning to end was carried out during a walk-through. In 2010, the children’s railway was operating, and much longer than in previous years. The operational season began in April. In 2011, the Children’s Railway was shut down due to construction work at Tulpar station. 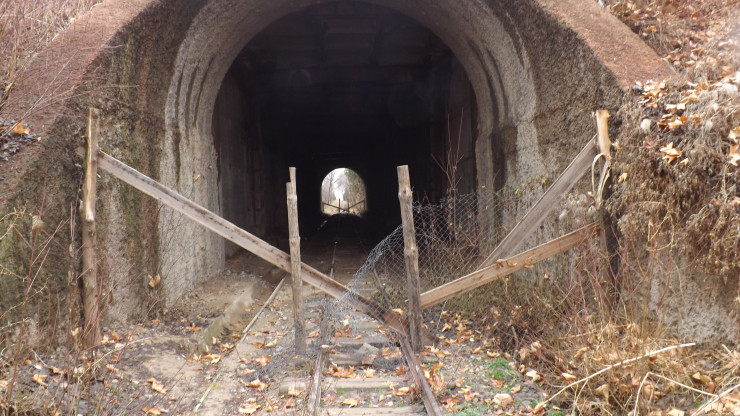 In 2015, the road was re-launched, but due to low demand among the citizens, the train again stood up. Finally, this time. So the children’s train completed its glorious course, and the Sportivnaya station became the final one for it.

Despite numerous public surveys about whether the children’s railway should be restored, the track was still partially dismantled.

But is it that bad? Now the territory of the railway track is partially converted into running and cycling paths. 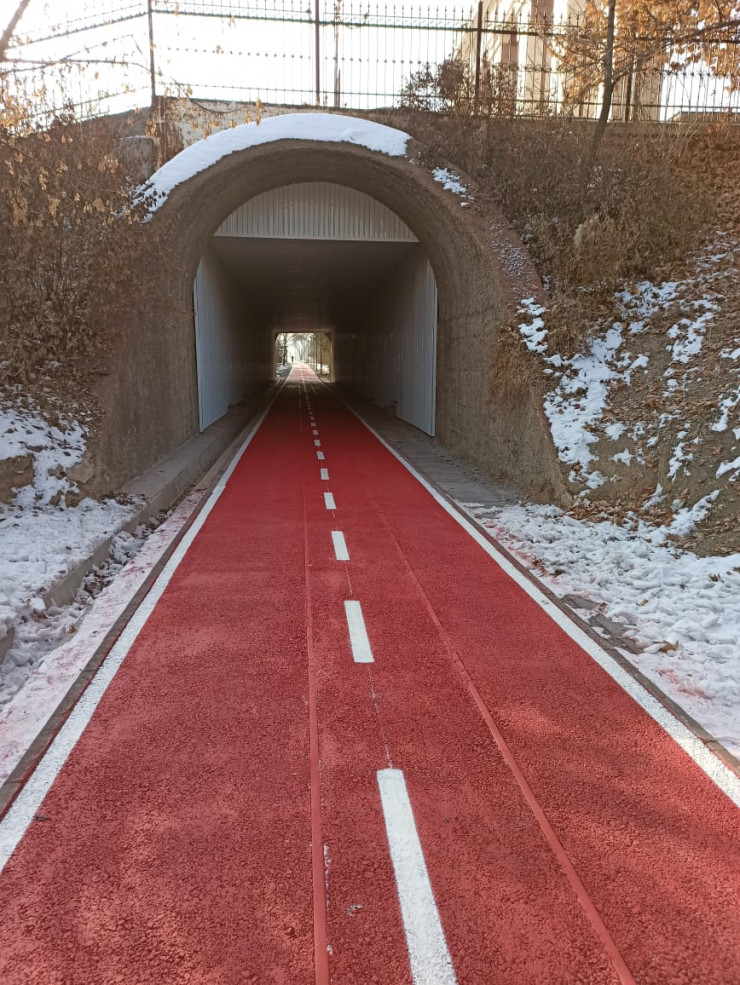 The territory is ennobled, so many sports fans specially come here to run.

Despite all the hardships of fate, the way of the children’s railway is loved by Shymkent residents to this day. Especially the area near Tulpar station. Atmospheric photo shoots are still held here.

Some of the townspeople still complain that the unique children’s transport was left on the sidelines of fate, hoping that one day the train will once again rumble the children from the city center to the arboretum.