The city of Astana can boast a number of impressive places that have appeared here since the announcement of the capital. One of the recognizable landmarks of the city was the Palace of Peace and Reconciliation. This is the only building in the shape of a pyramid, considered as another miracle of the world. The idea of rising the Palace of Peace and Reconciliation belongs to the President of the Republic Nursultan Nazarbayev, who proposed to rise this brave facility, intended for congresses of representatives of world religions.

The author of the project is British architect Norman Foster, who created many amazing structures. The pyramid in Astana combines greatness and elegance. The top of the pyramid is decorated with a panel with 130 pigeons depicted on it – a symbol of the people of Kazakhstan, and their number equals the number of peoples living in peace and harmony in the territory of our Republic.
The building of the Palace of Peace and Reconciliation is built on the principles of the “Golden Section”, the height of the object has a length equal to the sides of the square lying at the bottom.

In the exhibition halls temporary exhibitions and creative meetings are organized, where there gather artists from Kazakhstan and other countries

At the top of the pyramid is the “Cradle” hall, which hosts the II world-wide congress of world and traditional-national religions. In order to climb to the very top of the pyramid, you can use panoramic elevators that move not vertically, but diagonally. While driving, you can enjoy the beautiful terraces, beautifully decorated with greenery. You can also make a hike up the stairs, passing through the charming hanging gardens, consisting of plants imported from different corners of the Earth.

The pyramid of Astana attracts visitors with the beauty of the building, interesting interior solutions and a cozy park area around. At night, when the stained glass top of the pyramid is illuminated from the inside, the building becomes visible practically from any point of the capital.

The Palace of Peace and Concord became a symbol of the unity of cultures for the residents of the capital and the entire Republic of Kazakhstan. 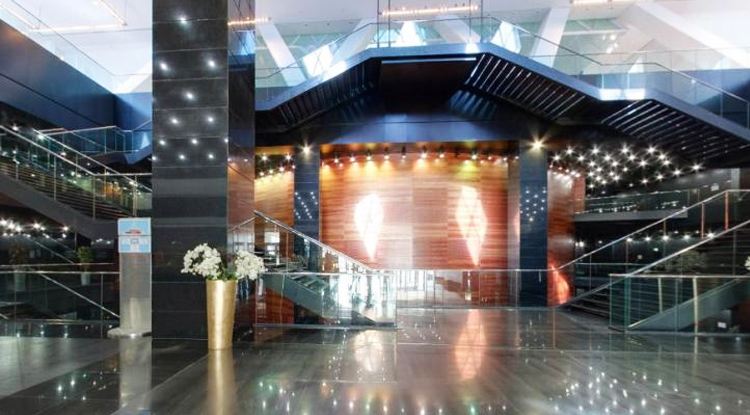