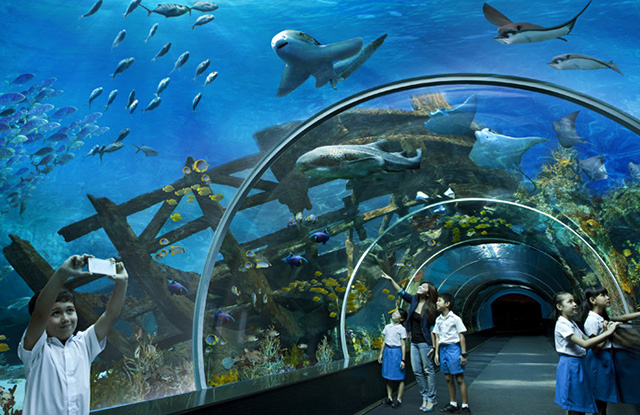 The aquarium of Nur-Sultan (Astana), the entertainment center ” Ailand “(formerly” Duman”) – a piece of the endless ocean in the heart of the arid steppe zone. The aquarium is still the first and only one of its kind in Kazakhstan and is considered to be the most remote from the ocean in the world. The distance from the nearest ocean is more than 3000 km. Thanks to this feature, the aquarium is listed in the Guinness book of Records.

The amazing Kazakhstan aquarium in Nur-Sultan (Astana) opened back in 2003 and immediately won the hearts of visitors with its scale and spectacular spectacle. Huge reservoirs hold 3 million liters of water and 120 tons of sea salt and create natural conditions for comfortable living of marine inhabitants.

Hundreds of thousands of tourists visit the aquarium every year. Every day visitors come to the aquarium to enjoy the most beautiful, fascinating, calm and peaceful underwater world, meet its inhabitants, learn a lot of interesting things about the depths of the world’s oceans. You can buy tickets on our website.

More than two thousand amazing marine animals, including representatives of several hundred species, have become inhabitants of the depths of the aquarium. Here You can get acquainted with such outstanding representatives of the ocean fauna, such as the cat shark, starfish, seahorses and many others. The aquarium in the Duman RC consists of one Central tank and two exhibition areas.
At the bottom of the most spectacular – the Central reservoir, there is an acrylic tunnel with a length of 70 meters. Passing through the tunnel, visitors to the aquarium have the feeling that they are on the sea floor, and above their heads, at arm’s length, predatory sharks, sea turtles and other marine life of unprecedented beauty swim.

The aquarium in Nur-Sultan (Astana) has two exhibition bays, including eleven tanks of various volumes. Thanks to the various forms of aquariums, it is possible to observe the life of fish in close to their natural habitat and monitor the feeding process of predatory fish. Here visitors of the aquarium can get acquainted with representatives of the ichthyofauna and learn a lot of new and informative information about the life of the inhabitants of the deep ocean from different parts of the world. Residents of fresh waters of the South-Eastern region, inhabitants of coral reefs, exotic inhabitants of South America – piranhas, crabs, pacus, seahorses, anemones, starfish, cow fish-settled in the aquarium.