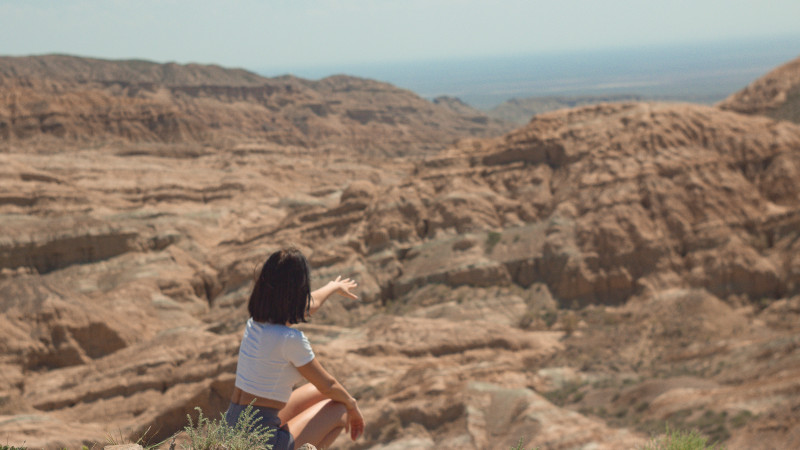 “They look like a Zebra cake. Tiger Mountains, where “Kyz-Zhibek” was filmed”

The so-called Tiger Mountains are located 300 kilometers from Almaty on the Saryozek-Koktal highway, not far from Zharkent. Big tabby cats don’t live here. Covered with white shale and surrounded by gold and red sand, the mountains got their name due to the characteristic striped color of their clays, of which they are composed. In this article, we will tell you why these places attract tourists so much.

Remember the scene from the cult love saga “Kyz-Zhibek”, when the main character runs along the steppe along the foothills shouting ” Victory!” and heralds the return of the warriors who defeated the Dzungars. These shots were shot here. The mountains became one of the main locations of the film, which was released in 1969.

Today, these places attract not only experienced filmmakers with magnificent views. Travelers who have visited here call the local landscapes fantastic and unearthly. An interesting color scheme and gorgeous views do not leave anyone indifferent.

Journalist and travel blogger Elena Nikitenko visited the Tiger Mountains to test the SUV, and now willingly shares her impressions of the trip.

“The Tiger Mountains, like many other places around Almaty, suddenly became interesting to everyone during the quarantine period, when there was simply nowhere to go. This is a very beautiful mountain range. The location will appeal to those who like to drive around in cars and look for amazing places. The uniqueness of the Tiger Mountains is in the stripes. When you climb a hill and look down at the mountains, it just takes your breath away. It seems to be landscapes from Mars, ” she says.

There are a lot of photos with striped mountains on the Web, but for some reason they are all called the Altyn-Emel Mountains. The girl explained that the Tiger Mountains not only border the National Park, but also have a direct relationship to it. 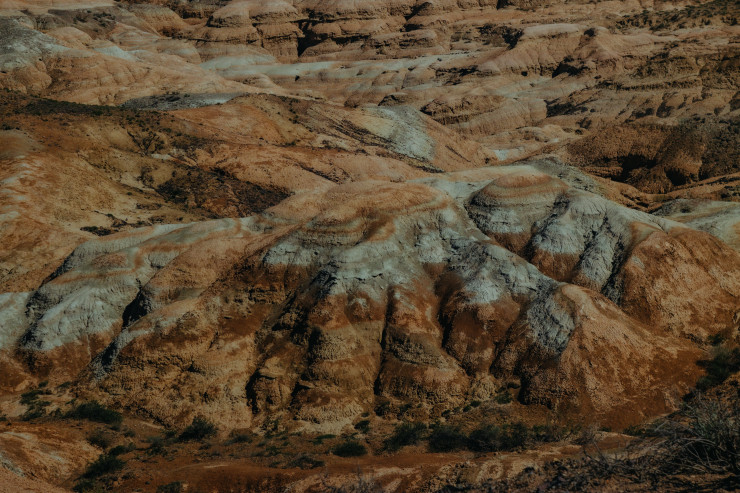 “The Altyn-Emel mountains are called Katutau. The Tiger Mountains are their foothills. It takes longer to get to Katutau, you need to pass through the national park, and the Tiger parks are located right next to the Koktal-Saryozek road, ” says Elena. 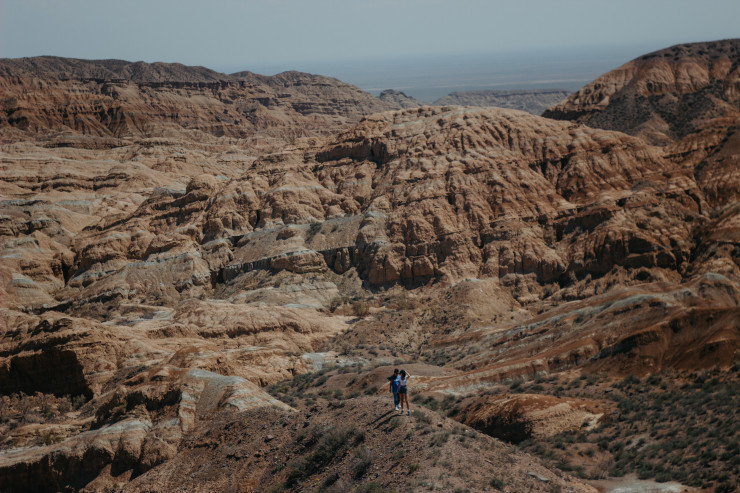 And the Tiger ones are made of clay rocks of various colors-yellow, white, red. They reminded me of a Zebra cake. They are very diverse. We went deep into the canyon, which very few people do. The others come to the observation deck and look from above, from the side, and we walked right inside – it was amazing! ” – says Eric.

According to the young man, he was prompted to visit these places by the ancient history of the mountains, in particular, the fact that once there was an ocean and volcanoes were active.

“There used to be an ocean in these places-this fact just blows your mind! Many people do not pay attention to this information, but I am interested in the story, ” says Eric. 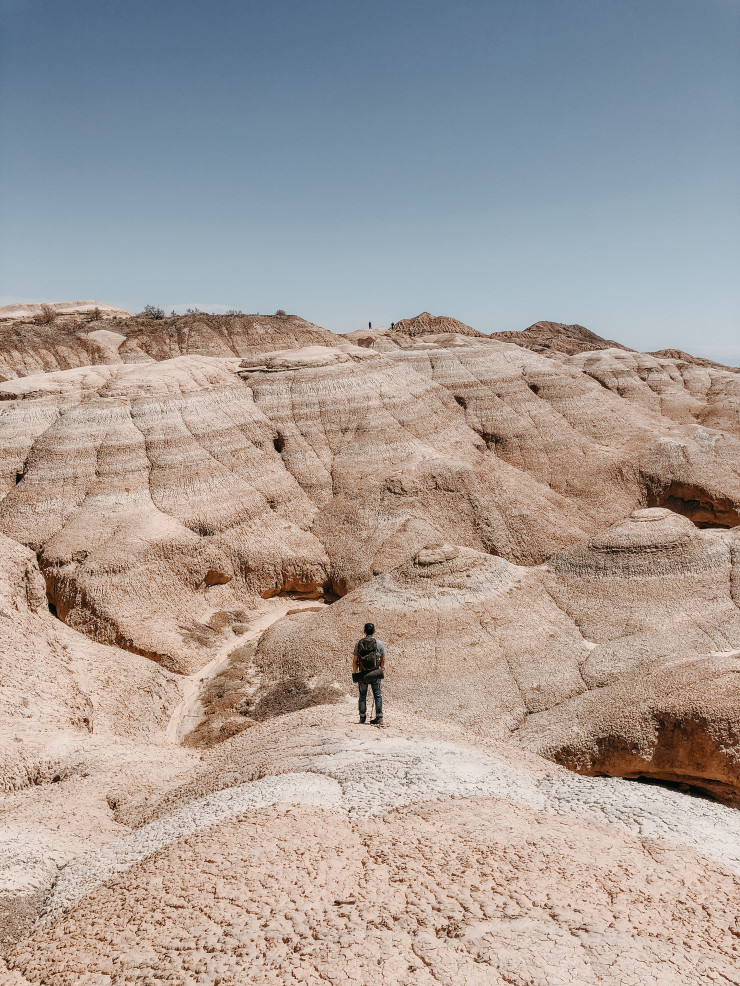 Almaty resident Adel Zholdasova also willingly shares her impressions of the trip to the Tiger Mountains.

“It’s a magical place. It is somewhat similar to Altyn-Emel, but, in my opinion, the views of the Tiger Mountains are more picturesque. The color of the mountains is similar to the stripes on the skin of a tiger, it seems as if this is how the artists decorated the frozen lava. By all means, you need to see them live! There are amazing sunsets – everything is flooded with orange light and it seems that you are on another planet, ” says Adel.

Another tourist from Almaty, Olga Alexandrova, learned about the Tiger Mountains quite recently. After looking at the photos and studying the information about this location, the girl hurried to visit it to see this beauty firsthand.

“Once in the Tiger Mountains, I was impressed! This is a real miracle of nature – something incredible. I was delighted with the landscapes, they struck me with their unusual color scheme. It was easy and pleasant to climb up. I had a gorgeous panoramic view and felt like I was on another planet. I will definitely come back here again!” – she says.

Janel Sergalieva lives in the Panfilovsky district, but she only found out that there is such a location in the immediate vicinity when her little sister was going to go there on an excursion with the class. The girl began to search for information and found out that the place is located near Zharkent. She took a taxi to the Tiger Mountains.

“An unusual location. When you look from above, you get the impression that this is an alien terrain. It was very interesting to visit there!” – she says.

Where are the Tiger Mountains located and how were they formed

The geographical name of the Tiger Mountains is Dolantau. They are located at an altitude of 1,800 meters above sea level in the foothills of the Dzungarian Alatau between the Ili River and the Altyn-Emel Ridge – on the border of the Almaty Region of Kazakhstan and the Xinjiang Uygur Autonomous Region of China.

The mountain range was formed under the influence of two frozen lavas of large volcanoes that were active in these parts once, but are now inactive. The mountains stretch for more than 16 kilometers from southwest to northeast. They got their name because of the color of the clays composing them. The rock is very fragile, and under the influence of water and wind erosion, bizarre shapes have formed from it.

The exact age of the rock deposits is unknown. It is generally believed that they are 60-70 million years old, but there are scientists who disagree with this and estimate the mountains as much younger.

What to see nearby

The surroundings of the Dolantau Mountains are rich in wildlife. Here you can find a large number of animals and birds, and insects alone, there are about five thousand species.

There are also a lot of plants in this area-there are barberry, salt marsh cistanche and saxaul.

“Definitely: Tiger Mountains – an interesting place! The landscape makes you think that you are now somewhere on the moon. The main thing in this place is the weather. If you get there in the rain, it will be difficult to move around. There’s nothing to do in the heat, either. We were lucky. We arrived there on a cloudy day and were able to walk and enjoy nature. Not far from the Tiger Mountains is Kieli Agash. The visit to this place also left a lot of positive impressions. The energy of this place is just off the scale, ” she says.

The easiest way to visit the Tiger Mountains is to use the services of professional guides and Almaty tour companies. The cost of the tour, as a rule, does not exceed 10 thousand tenge.