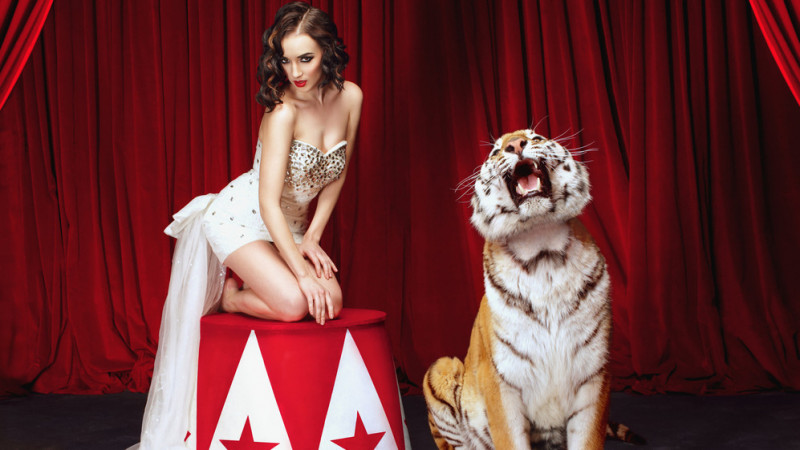 “Tame yourself.” 5 most unusual circuses without animals

Now more and more countries refuse to use animals in circus performances, without losing the entertainment of the performances. After all, people come up with new tricks and decorations, and sometimes they come to the aid of modern technology. In this article, we invite you to the arenas of the best circus troupes in the world.

If it were possible to measure the scale of emotions, then, perhaps, under the arches of the circus, this indicator, as they say, would go off the scale. It is here that the real magic of art is created. Regardless of age or nation, circus performers always attracted the attention of people, made their hearts beat to the beat of the drum roll and exhaled loudly after dangerous tricks.

“Wow! Are they even people?”, “I saw this number live. I’ve never seen anything cooler”, “This is what I understand: people hone their skills all their lives, break themselves, comprehend more and more new peaks. It’s not like torturing animals. It is better to look at such handsome men!” – commentators write.

It is noteworthy that this performance called “The Wheel of Death” can be seen in the program of a famous Canadian circus troupe. That’s where we’ll start.

In 1984, a young man named Guy Laliberte, walking on stilts from the province to Quebec 90 kilometers, earned a grant of one million dollars. That year, the government of Quebec celebrated the 450th anniversary of the opening of Canada and organized a competition to attract street performers. This gave rise to the formation of the circus, which will become the most profitable and recognizable around the world. Cirque du Soleil, which means “Circus of the Sun”, appeared thanks to the dream of a young Canadian to create a nomadic circus. The main principle of Laliberte from the very beginning was the complete rejection of the participation of animals in the show. He never attracted them in any performance, despite the most interesting ideas of the trainers. In 2015, Laliberte will leave his brainchild, selling a significant share of his shares for one and a half billion dollars, but the principles of Du Soleil will remain unchanged.

Now the circus troupes employ about five thousand people from almost 60 countries of the world. In their diverse program, there are always three components: extravagant costumes of their own production, unusual and spot lighting, and original, often diegetic musical accompaniment (that is, the source of the sounds is visible to the audience). Thanks to this, the genre Du Soleil was characterized as a cross between a circus and a theater.

The circus needs 50 to 75 trucks to transport the show. It takes more than a week to install all the equipment for some performances. The circus’s repertoire includes more than a dozen different thematic productions, including tributes to Michael Jackson and the Beatles. There are also water performances. The circus is famous for its acrobats, while, despite the dizzying stunts, all the numbers are performed without insurance, and the artists almost never have understudies.

The Circus of the Sun is based in Montreal, where the first blue and yellow tent of the circus is still installed. However, the main troupe of artists performs in Las Vegas. Five shows take place there on a regular basis. Others are on permanent international tours. Now it is 30 cities from 14 European countries. The nearest cities to Kazakhstan are Moscow and St. Petersburg. You can get acquainted with the schedule on the official website of the circus.

The German Roncalli has existed since 1976 and is famous for its circus history. But a couple of years ago, Roncalli made a splash. Thanks to an inventive approach, the audience saw how elephants learn to fly, and goldfish grow before their eyes and swim under the dome.

Yes, the management of the circus completely refused to perform with live animals. Instead, three-dimensional holograms are now broadcast. So, Bernhard Paul (the founder of the circus and part-time actor who plays a clown) invested half a million euros in the introduction of 3D technology. And it paid dividends – Roncalli was known all over the world, and the audience interest increased several times.

It is worth noting that the gradual abandonment of performances with animals in Roncalli began in the early 90s. New technologies, according to Bernhard Paul, do not harm animals, simplify logistics during tours and continue to attract audience interest.

Bernhard gave his circus such a sonorous name in honor of Pope John XXIII, who was called Giuseppe Roncalli. Plus, the square in front of Cologne Cathedral was also called Roncalli-Platz. It was there that Bernhard Paul always dreamed of seeing the tent and the wagons of his circus.

In addition to the holograms, the circus troupe is famous for its performances accompanied by a live orchestra and participation in open-air events.

The Roncalli Circus is based in Cologne, Germany. You can see their shows in several cities: Cologne, Recklinghausen, Dusseldorf, Ludwigsburg, Vienna, and Graz.

Two thousand years – that’s how long there are traditions of the Chinese circus, which is a national treasure. One of the fundamental ideas of the circus is not the training of an animal, but the ability of a person to tame himself. Most of the tricks of the Chinese circus artists are unique. No wonder, because the troupe consists of Shaolin monks.

And until recently, all the secrets of the skill were considered a state secret. And in the old days, the death penalty was imposed for revealing the secret of the flexibility of the snake woman. Most of the numbers in the Chinese circus are performed by young men between the ages of 12 and 23. The traditions of many provinces are such that children begin to learn circus art from the age of three. Getting a child into the circus usually guarantees his future, but it is necessary to pass the competition, and usually choose from two to three thousand applicants. So at the age of 10-12, they already have the titles of laureates and are highly professional artists.

The interest in the Chinese circus can be explained by the unique and colorful oriental flavor, and the originality of the art and the complexity of the specifics of the original numbers – by the difference and remoteness from the European circus school. However, like most colleagues, the circus has now temporarily suspended any performances. But the information on the official website and on social networks is being actively updated, so perhaps soon we will be able to experience this subtle eastern world of the circus again.

That’s where human and animal life is intertwined, so it’s in Africa. But even here there is a unique place for the continent-the circus “Mama Africa”. It brought together dozens of artists from different parts of East Africa. And all of them basically refused to perform with animals. Instead of training, the guys perform amazing tricks with balancing.

Impressive physical performances accompanied by colorful African music and unusual dances-this is a new and dynamic performance of talented Africans. Of course, in addition to juggling, there are no less impressive numbers. Acrobats and aerialists have a special, inherent African plastic movements and charismatic energy. And sometimes during the performance, guests from the audience hall are invited to take part in outlandish dances to the African drums. Guests are also invited to play on them.

The continent saw the first performance of Mama Afrika on November 19, 2008, and the following year the circus went on a world tour from Tanzania. Touring for “Mama Africa” is not only a way of earning money, but also an image story.

“When I opened a circus school, and then founded the circus itself, I wanted to destroy the popular African myth – an artist can not feed himself by his art alone. I am sure that if the state and politicians help us, we will develop our talents in a way that no one can imagine. I am a former acrobat myself and have performed all over the world, and now I want to help African artists make their way, ” said the founder of the circus, Winston Ruddle.

It is worth noting that the circus troupe is not composed of professional athletes or actors, but rather enthusiasts. And one of the goals of the performances is charity-part of the money from concert tickets goes there. And the most beautiful thing about this whole story is that every winter “Mama Africa” tours the world.

Artists are especially popular in Europe, in tourist cities and on beaches. Unfortunately, the official website does not have the exact dates and schedules of the nearest foreign tours of the circus. As of January 2021, the ticket price was 25 thousand Tanzanian shillings (4641 tenge) for an adult and 15 thousand (2784 tenge) for a child ticket. But if you manage to find yourself in Tanzania (which is in the East of the continent), then still drive to the coast of the Indian Ocean, to the town of Dar er Salam. It is there, in the Masaki area, at the very edge, that you will meet the yellow and red tents of the African circus, or, as it is called in the world circus community, “the circus of the senses”.

What about moving to Australia? The OZ Circus (named after the story “The Amazing Wizard of Oz”) is unlike any other in the world. It has existed for more than 40 years and combines circus art, satire theater and rock and roll in its performances. Artists do not accept phonograms and play musical instruments themselves. At the same time, all the rooms are always imbued with the Australian spirit. Such an extraordinary mix of arts has brought the artists worldwide popularity and recognition. And yes, they don’t use animals in their performances either.

Circus performers like to interact with guests and often show their tricks right in the middle of the crowd. And some of the performances take place right over the heads of the audience.

“I’ve never seen anything so cool up close. This is an unreal immersive experience. And their performances are simply stunning, ” the guests of the circus share their emotions.

The official website meets with a disappointing inscription: “The world has changed dramatically. And we’re taking this unique opportunity to rethink everything we do.” Unfortunately, the circus has been suspended due to the pandemic. But the artists are not discouraged and not only prepare for the resumption of the shows, but also record videos teaching circus tricks and share them on Facebook.

And finally, it is worth mentioning the Shymkent circus, which began to gradually abandon performances with animals. In March 2021, the artists gave 14 show programs based only on acrobatic tricks, performances of clowns, magicians and jugglers.

“We want to update the image of our circus. And it’s not just about the sets, costumes, and tricks. In March, we gave 14 performances without animals, and the audience took them “with a bang”. We will continue this practice and are already preparing new performances for the Children’s Day and for the City Day, ” said Sultankhan Amanov, a representative of Shymkent Circus .

It is interesting that the new repertoire of Shymkent circus performers is based on the best techniques of Cirque du Soleil.