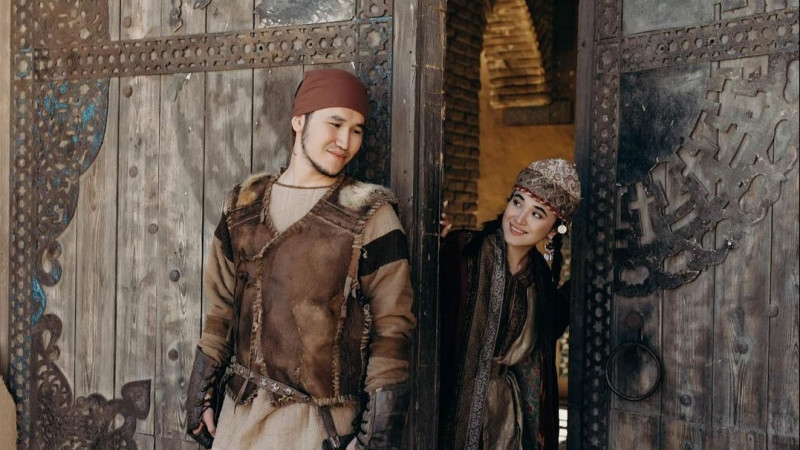 It has been 10 years since Lovers ‘ Day appeared in Kazakhstan – April 15. The holiday is dedicated to the heroes of the Kazakh poem “Kozy-Korpesh and Bayan-Sulu”. Their tragic story serves as a reminder of how important it is to appreciate your loved ones and devote more time to them. In this article, we will tell you where in Kazakhstan are the most romantic locations to capture this day in your hearts.

The story of Koza-Korpesh and Bayan-Sulu is similar to the play “Romeo and Juliet”by W. Shakespeare. The couple was made for each other. However, Bayan-Sulu was promised by her father to another-Kodar. Kodar killed Kozy-Korpesh to eliminate the rival. And Bayan-Sulu, not wanting to live without a loved one, killed herself with a dagger.

This story is sealed in the stones of the tomb: the uncle of Kozy-Korpesh Tailak bi erected the majestic mazar of Kozy-Korpesh and Bayan-Sulu with a height of 12 meters. It is located in the Ayaguz district of the East Kazakhstan region. Isn’t this the first place that should be on our list? Mazar is one of the monuments of Kazakhstan that have survived to our time with some changes. A marriage proposal or a declaration of love on this holiday next to the mazar of the Goat and Bayan will be a symbol of eternal love and loyalty.

In the city of Ayagoz, near which mazar is located, there is also a monument to lovers. It was opened in 2011 in a local park. The structure depicts Kozy-Korpesh with a dagger in his hands and Bayan-Sulu. On the palm of the girl sit two birds, which, according to one version of the legend, turned this pair. 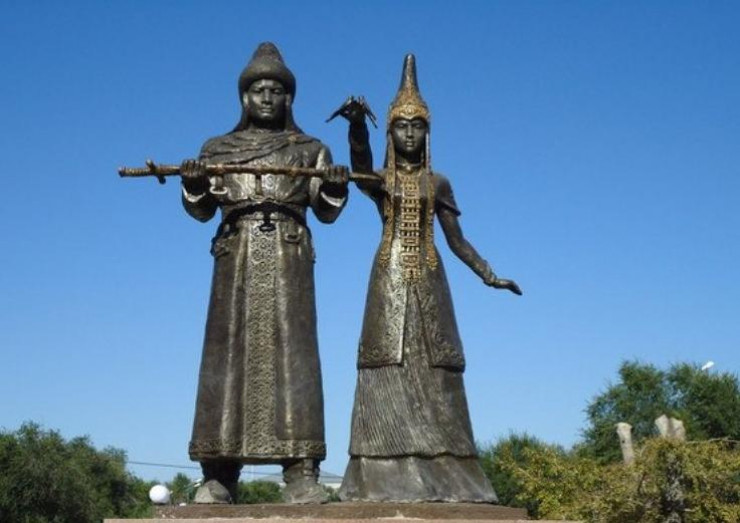 Star in a music video about love. The city of nomads in Kapshagai

More romantic than the songs of Jah Khalib can only be the location where he shot his video “Medina”. Nomad Fortress was built in 2004 for the filming of the film “Nomad”. The walls of the old city in the oriental style, sand domes, huge doors-gates with national patterns – this is the romance of this place. By the way, after the clip of the mentioned rapper in this place, couples increasingly began to shoot love story.

Nomad City, or Nomad Fortress, is located near the town of Kapshagai, on the banks of the Ili River. It is not necessary to go to this area by car, the road is bad. It will take 2.5 hours to get there. At the interchange with the village of Kazakhstan sign, turn right. Then go straight for about 4 kilometers, then there will be an exit to the right and a sign “Nomads”. Entrance to the city is paid: adults-1000 tenge, and children under 12 years-500 tenge. And to feel like a real Bayan-Sulu and Kozy-Korpesh, you can hold photo sessions in national costumes.

Retire to the Bartogai reservoir

Two hours from Almaty there is a rare beauty place where you can retire and spend the day very romantic. The Bartogai reservoir is located at an altitude of 1060 meters above sea level. It is surrounded by the majestic mountains of Sogety in the west and Toraigyr in the east. The surrounding area of the reservoir has been popular with tourists for many years. After all, here you get amazing shots.

In this place, nature is diverse: there are green trees, dry banks, rocky cliffs, and blue water. Photos in these places are incredibly beautiful.

And they also come here to observe how the water from the reservoir enters the Chilik River: under the most powerful pressure, a large amount of liquid is thrown out from two tunnels in the direction of each other. And, of course, this place is a unique location for spectacular photos and videos. To show such a phenomenon to your soulmate means to give an unforgettable impression.

Enjoy the flowering in the Botanical Garden

In spring, the Botanical Garden is especially beautiful. While the first buds appear on the trees outside, in the Botanical Garden you can already enjoy the flowering of a variety of plants. Isn’t that romantic? In Kazakhstan, the most popular botanical gardens are in Nur-Sultan and Almaty. The first, of course, is inferior in size. But here you can arrange a photo shoot in the greenery.

The main botanical garden of Almaty is a place of eternal summer in the city. Other advantages include the fact that it is located right in the city.

Massifs of oaks, pines,firs and birches create an atmosphere of untouched wilderness. At night, there will also be beautiful shots due to the long paths and twinkling lights along them.

A journey into the future. Nur Alem Museum in Nur-Sultan

In the midst of glass buildings arranged in smooth lines along smooth paths, the EXPO grounds give the impression that you are entering the future. Here, modern mirrored facades create a unique location for romantic walks and dates. The Nur Alem Pavilion is the central object. This is a fundamental structure in the form of a perfect ball with a diameter of 80 meters. At night, it shines, and the entire surrounding area is illuminated.

There are many unusual installations, spacious paths and coffee shops on the territory of the EXPO. Here you can take a walk, make a cool photo shoot and drink coffee. Be careful: the capital wind has not been canceled.

Professional photographers here have a place to show their imagination, experiment with angles and light. According to photographer Dmitry Li, since the weather is unpredictable, the EXPO pavilion saves and guarantees a great time and good shots.

“The territory of the EXPO is very, I would say, photogenic. It is interesting both inside the ball and in the vast territory adjacent to it. Lots of different lights. Both artificial and natural. Entrance to the Nur Alem pavilion is quite inexpensive (500 or 1000 tenge). Since the weather in Nur-Sultan likes to present surprises, EXPO is just a”lifesaver”. In any weather, a great result is guaranteed, ” the expert shared.

This place is not known to many people, but this does not detract from its beauty. These are quarries of white clay. The unusual turquoise color of the water is achieved due to this rock. Depending on the time of day, the angle of the sun’s rays and the shadow from the cliffs, the shade of the water surface can change from light turquoise to dark green.

It is really romantic here, and the white cliffs against the blue water create the atmosphere of the Maldives. In this place, you can forget that you are a couple of kilometers away from the hustle and bustle of the city.

Access to the career is open. Moving along the Alash highway, you need to turn left at the first turn. Then move off it to the right on a country road, drive half a kilometer and you will see the pits-the same quarries. Tourists who have visited this place say that you can not swim in these waters. In addition, it is not recommended to approach close to the cliffs, as the rocks may crumble.

Visit the “edge of the earth”. Chalk hills in Uralsk

Western Kazakhstan is rich in minerals, including salt, lime, cement raw materials, construction and alluvial sand. The available reserves allow them to be developed commercially and used for a long period of time. So, on the outskirts of Uralsk there is a brick factory that uses lime for the production of bricks. The places where this lime is taken are open to the public, and the piles of chalk stones form an unusual location.

Zauresh Alpanova, a photographer from Uralsk, says that the Chalk Hills are a unique place among the green areas of the city.

“The most interesting thing is that the location always changes: then large blocks, then mountains of chalk or small white stones collected in slides. The location is gorgeous at sunset. Photo shoots on Chalk Slides are never similar to each other,” says Zauresh.

Newlyweds and couples often come to the slides for photo shoots and walks. The romance of this place is that here you can take epic photos with your loved one on the “edge of the earth”.

Escape to another planet in the Akespe tract in Mangystau

The chalk formations of the Akespe tract, which nature has worked on for millions of years, create the feeling that you are on another planet. Here you can imagine that you are on your own planet, where there is no one else but you. It is located in the central part of the Mangyshlak Peninsula. Nine kilometers separate it from the Koshak Bay.

A bridge is laid across the main channel of the canyon. The Akespe tract is composed of chalk rocks, it is white chalk, which reflects the rays in sunny weather. In the daytime, there will be very bright photos, and in cloudy weather – more dramatic. The sky here is huge and is shaded by white rocks.

The natural attraction is located 120 kilometers from Aktau, the entire route runs along the highway, you can get there by any serviceable car.

Drown in the sand. Sandy Cape in Aktau

Mangyshlak peninsula on the map resembles the profile of a girl. On its very “nose” is a Sandy cape. It is located 70 kilometers from Aktau in the Karakiyansky district. After driving along the road towards the recreation centers and turning left from the Tree of life base, you need to drive along the dirt road and go down to the steppe road. Here, the golden dunes of Cape Sandy are everywhere. The only convenient transport for driving through the high dunes will be an SUV. 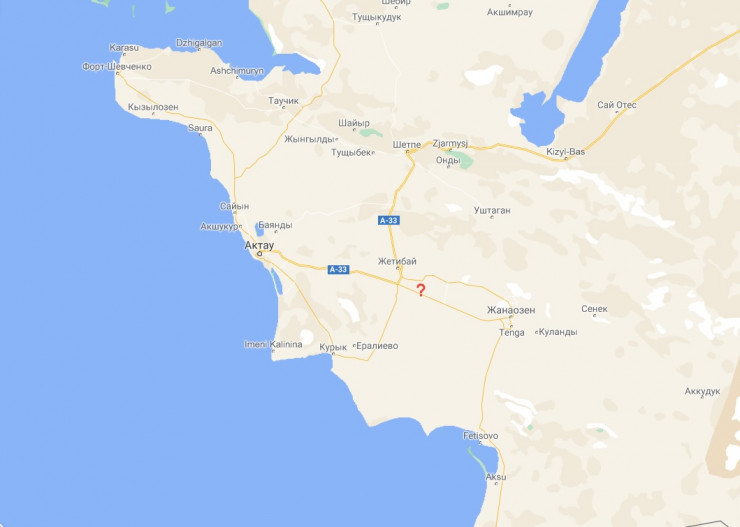 This place is loved by many residents of Mangystau and their guests. Talgat Samatov, a photographer from Aktau, says that this place is suitable for romantic photo shoots, as there are almost no people there.

“Very beautiful. Here you can feel a real unity with nature. Sand, sand dunes and the sea. Especially beautiful at sunset. Plus, you can have a great time, enjoy nature, think about something important, ” says the photographer.

Romance in the desert will remind you of the eastern fairy tales about Aladdin or “The Thousand and One Nights”. A couple in love against the backdrop of endless sands, generously illuminated by the scorching sun.

“It is here, against the background of desert landscapes, that lovers can become truly close, happy and enjoy each other’s company,” Talgat Samatov explained.

Enjoy the spring in the Burgulyuk gorge near Shymkent

Almost every resident of Shymkent knows about this place. There are two beautiful gorges here. One of them is called the local “refrigerator”, because the river flowing here is very cold and it is very difficult to get to the gorge, and it is better to do it with a person who knows the area. The second gorge is dry. There is no water in it, but the rocks and slopes are very steep, which means that there will be no long walk here.

The main advantage of the Burgulyuk gorge is its close location to the city. However, there are many territories belonging to private individuals and Sairam-Ugam National Park. To get to the tract, you need to go to the Lengerske highway and follow the signs “Ak Mosque”. After 50 kilometers, the mountains will stretch out in front of you.