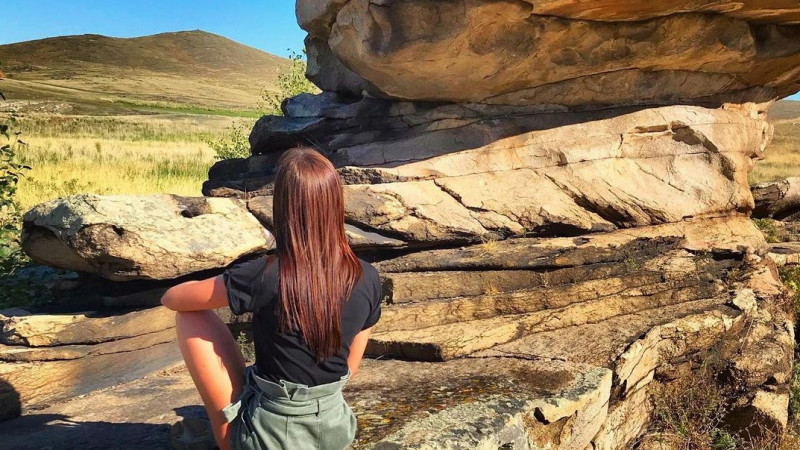 “You can shoot the Lord of the Rings here. What is interesting about Ak Bauyr-Kazakhstan Stonehenge

Travel is not only a new adventure, but also an opportunity to get new food for thought, to stretch your intellectual veins. Scientists have been working on the mysteries of Ak Bauyr for decades – it is a kind of ancient “amphitheater”, the true purpose of which is still not understood. In this article, we will tell you why it is worth visiting this ancient monument, also called Kazakhstan Stonehenge.

A half-hour drive from Ust-Kamenogorsk, near the village of Besterek, there is a Bronze Age monument, which includes a cave in the shape of a cone, “hidden” in a stone amphitheater 25 meters long. 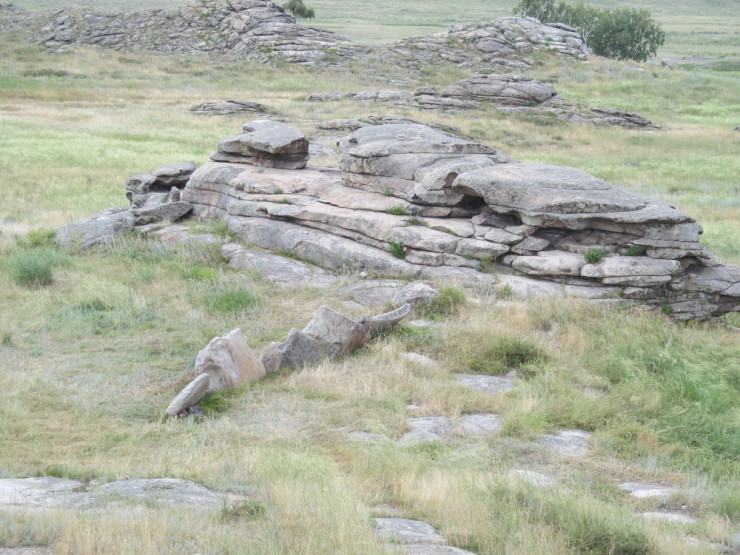 All this is surrounded by a “wall” or “fence” of stones, which was created by ancient people. 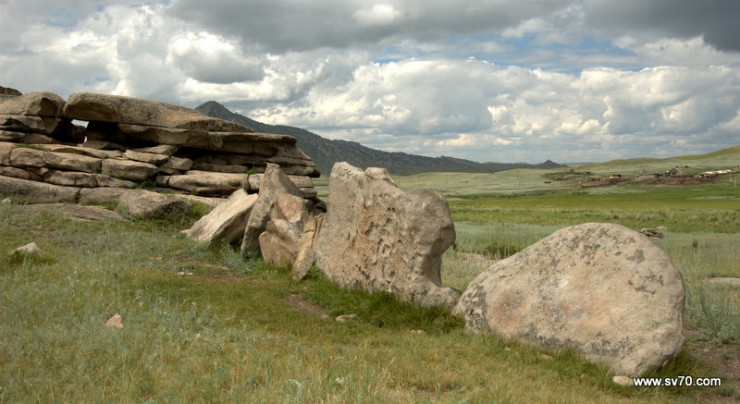 Around the so-called “amphitheater” there are many other stone objects, unusual structures that arouse interest.

The whole complex is called Ak Bauyr. The complex is located at the foot of Korzhinbay Mountain. Its height is 801 meters above sea level. Next to it – Sorokina Mountain, now Kyzyltas, it is much higher. 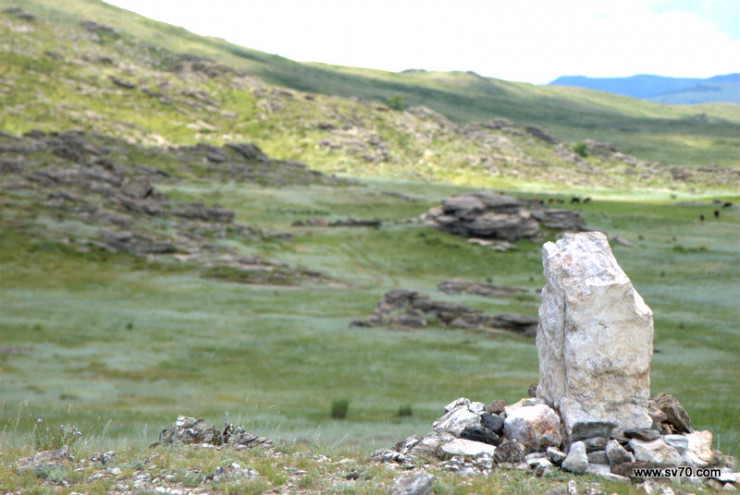 There are several versions of the translation of the name. The first is the “white liver”, because of the similarity of the shape of the grotto with this organ, and the white one is because the granite has a white coating. And the second – “bauyr” – the younger brother. This could be the name of Mount Korzhimbay in relation to Mount Kyzyltas. 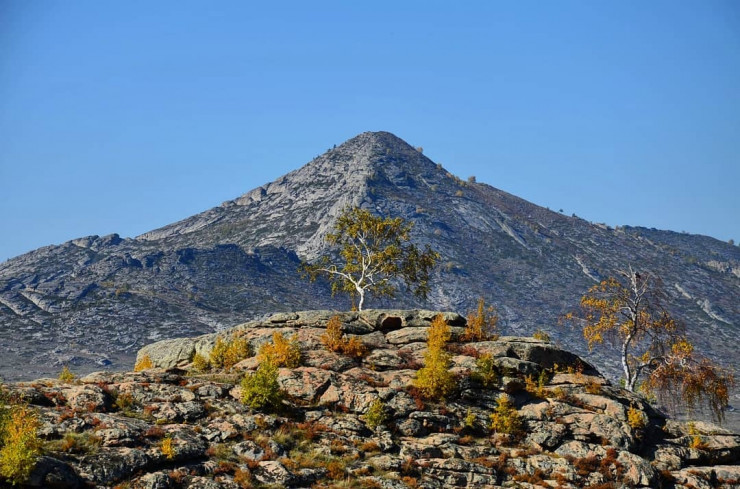 The most interesting object here is the grotto-a rock shelter. Its length is nine meters, width – four and a half, and the height reaches two meters. To get to the cave, you need to climb up the mountain. As archaeologists say, most likely, this ascent symbolized the ascent to the sky, to the upper world.

According to Galina Peteneva, head of the research department for Ak Bauyr of the East Kazakhstan Regional Architectural, Ethnographic and Natural Landscape Museum-Reserve, the most remarkable thing about this place is that there are ancient inscriptions and drawings.

“There are inscriptions in the cave that excite archaeologists all over the world. Scientists have counted about eighty elements here. The main ones are dots, circles, crosses, and zigzag signs. It is made very schematically and geometrically. This painting is characteristic of the period of transition from the Eneolithic to the Bronze Age. The drawings are made in brown ochre, ” she says. 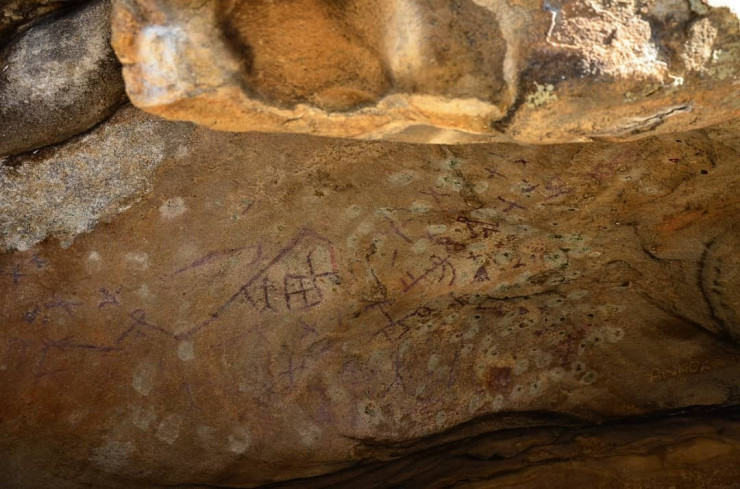 The heart-shaped through hole inside the grotto is also interesting. So, studying all the drawings and taking into account the structure of the canopy, archaeologists express different versions about the functions of this place. The first version is the simplest – the person depicted everything that he saw and what was happening around him. Goats, deer, a schematic representation of housing, a two-wheeled cart, a bull, and people are depicted in the cave. Galina Peteneva also talks about other versions: Allegedly, this is an ancient sanctuary, including a place for rituals of the seasonal calendar cycle. 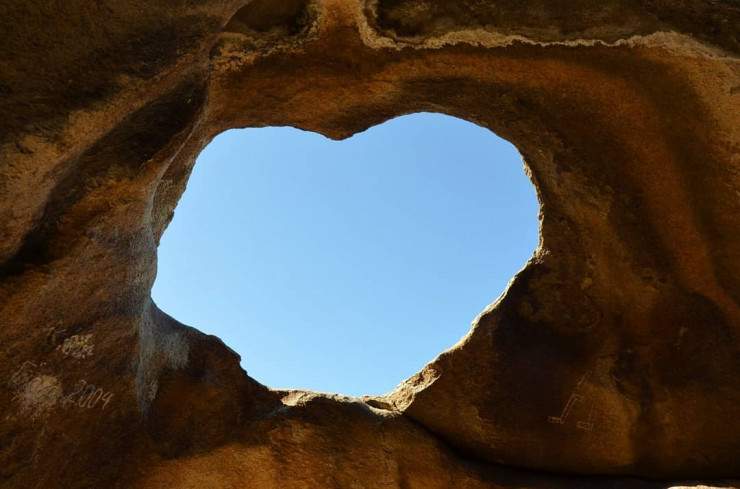 “The third version is closely related to the second – in a hole in the ceiling of the grotto, people watched the stars. And the drawings are astronomical signs. That is, the cave was essentially an observatory. The fourth suggests that the inscriptions are the origin of writing-pictograms, ” says the scientist. 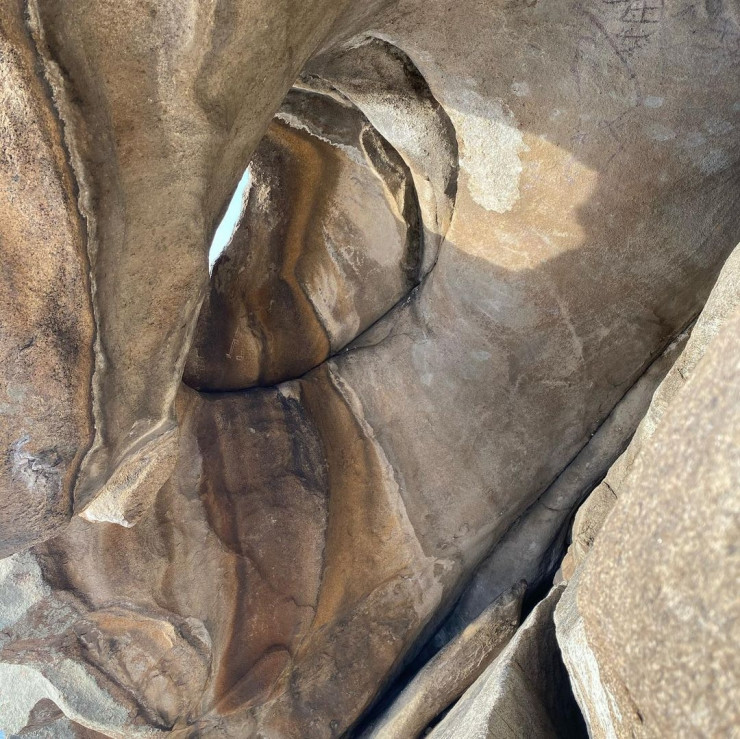 There is also a mystical version. It seems a bit fantastic, but it is being seriously investigated by scientists. According to ancient beliefs, Ak Bauyr was considered the center of the world, the place where the sky touches the earth. The fact is that the whole complex is located in such a way that when the sun sets and sets, light seeps through the stones and the cave cavity is filled with special energy. This theory is vague and insufficiently supported by facts. However, it takes place, because many tourists notice a powerful energy here.

The version that the inscriptions on the rock indicate the way to save humanity was promoted by the scientist E. V. Kurdakov. He believed that in the grotto, the priests pointed the way from the south to the north, where the tribes moved to survive in the post-glacial period. And the philosopher, traveler, artist, and archaeologist Nicholas Roerich called Ak Bauyr an open-air temple. Here, in his opinion, thousands of years ago lived priests who possessed secret knowledge. One of the cave paintings from the grotto he depicted in his painting “The Winner of the Serpent”. 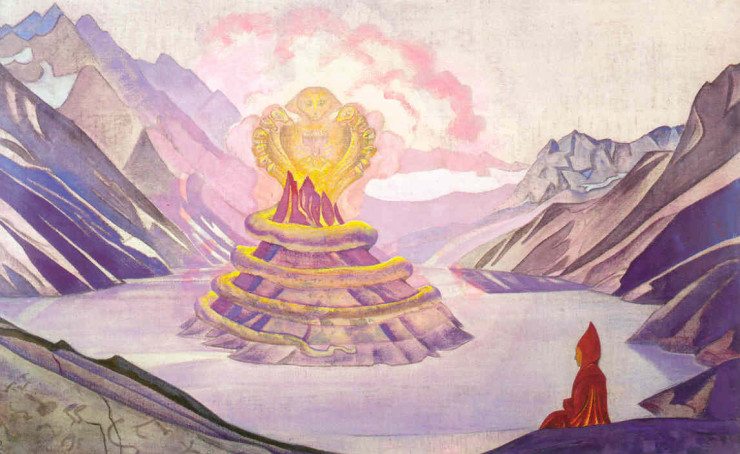 Many similar sanctuaries of the world are located at about the 50th degree of latitude. Stonehenge, the oldest observatory in the Czech Republic, the Makotr Square, the Stone Age sanctuary of the Gozek Circle in Germany, the Russian Arkaim-all these structures are located at about 50th latitude. 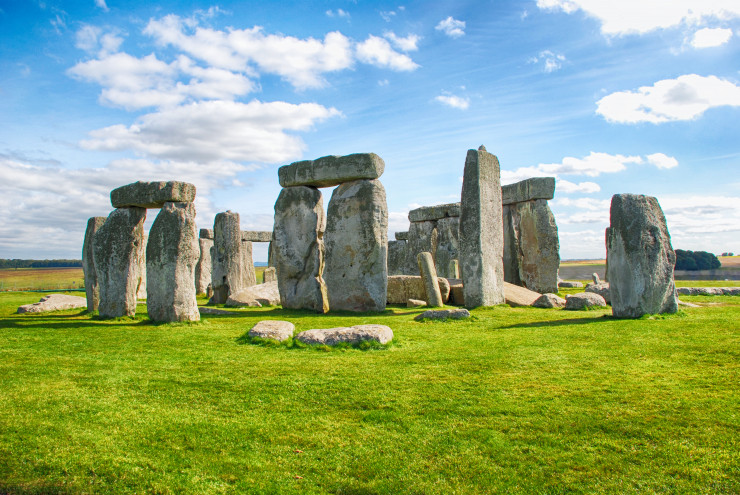 Tourist Dmitry Vishnevsky, who visited this place, says that Indiana Jones himself, one of the great fantastic tomb robbers, would have dreamed of getting here.

“How rich and full of wise knowledge is our Kazakhstan! They say it’s the border between heaven and earth. I came to these places by bike, in the summer, in the heat of 30 degrees. But, as the ancient monks said ,” The more difficult the path , the sweeter the reward.” However, what I saw did not leave me indifferent. There are such locations that if you take a photo from the right angle, dress in “fake” clothes, then you can make films in the style of “The Lord of the Rings”, – he says. 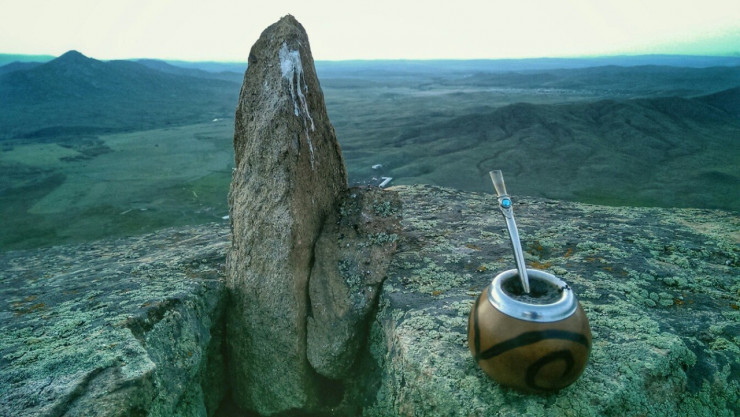 The traveler says that visiting Ak Bauyr is like visiting the past.

“When you see these rock carvings live, you just can’t believe how it is possible, how many thousands of years ago they existed. Rock carvings, stones that looked like someone was building a defensive wall, strange paths that looked like they were made artificially. At the top there is a platform that seems to have been cut down by someone, and it is on this platform that there is a small place in which there is practically no wind, ” Dmitry shared.

At the top of the cave and on the sides of the rock there are many strange cup-shaped depressions. They are all the same in shape and different in size. Scientists still can not agree on how they appeared and what function they carried. The bowls, which are located on the” roof ” of the grotto, accumulate water. But whether that was the point is still unknown. Speaking about the origin of these holes, most archaeologists agree that they are artificial, that is, made by man.

It is assumed that the bowls were used to collect water or a ritual drink, sacrificial liquid, or for divination. There is a version that the ancient shamans used them for predictions. They threw ritual dice into these holes and predicted the future by how they would fall and whether they would fall into the holes. 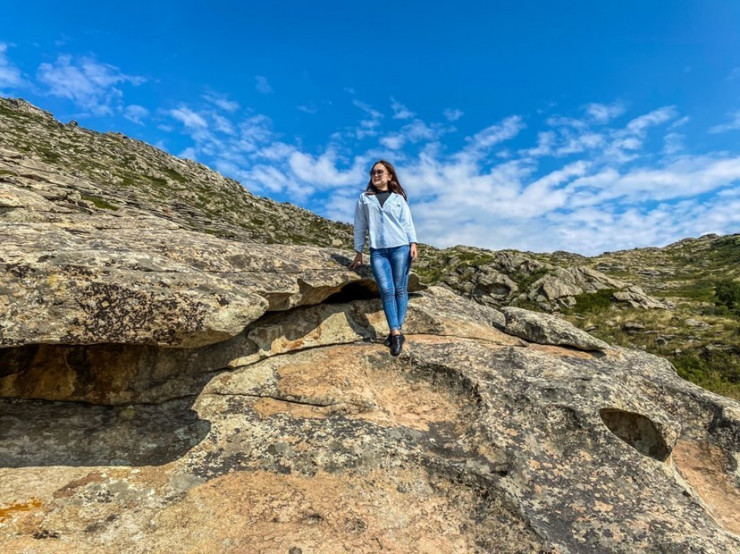 In the places adjacent to the territory of Ak Bauyr, scientists still find new artifacts and various chronological monuments. For example, in 2019, the excavations of an ancient settlement of Early Saxon tribes began. The research was conducted in 2020 and is planned to continue in 2021.

The East Kazakhstan Regional Architectural-ethnographic and Natural-landscape Museum-Reserve is considering the possibility of creating an open-air museum in these places. The architects offered the management of the museum and the regional administration three options for the design of the complex. One of them resembles an alien ship. “The latest findings suggest that there were settlements here. On the other hand, the objects found there can also be attributed to rites. A lot of ceramics, very different thickness and composition, tools made of stones-hoes, hoes, grain grinders, ingots, vessels. Scientists consider it a sensation. Because these settlements prove that the Saks were sedentary, ” says scientist Galina Peteneva.

The foundations of ancient buildings, burials, and a site marked with a sundial were also found. Interestingly, if you look at Sorokina Mountain, that is, to the west, on the day of the spring equinox, the sun will set directly on the top of the mountain. According to scientists, Neolithic and Bronze Age people observed the Sun and Moon here.

Astroturks are organized in these places in order to show the possibilities of the Ak Bauyr sanctuary in observing astronomical objects – the Sun, Moon, planets and constellations in ancient times and at the present time. This was the first experience in the development of astroturism in the East Kazakhstan Region as one of the most promising areas in the tourism sector. 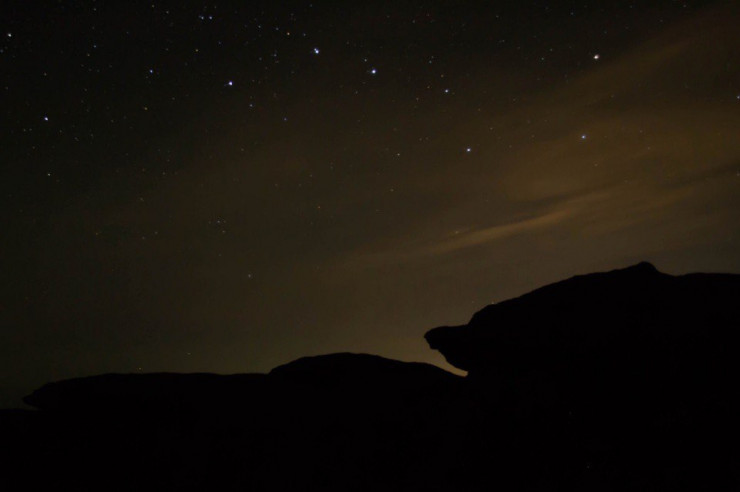 Ak Bauyr is located in an area where there are no rivers, waterfalls or mountains. All you can do here is study the rock paintings, inscriptions, look at the holes and think about the messages left here by the ancestors. Therefore, it is best to come here during the day and in the warm season. The complex is open to the public from 09.00 to 18.00.

For tourists, there are gazebos where you can have a snack and rest. However, in Ak Bauyr, you can not light bonfires, fry kebabs and drink alcoholic beverages. The entire territory, 63 hectares of land, is under round-the-clock security and surrounded by a fence. The ticket costs 400 tenge for adults and 200 tenge for students and pensioners if you have a student card or pension certificate. Children and schoolchildren up to 15 years old can see this monument for free.

At the moment, due to the pandemic, tourists are not taken to this place, as crowds are prohibited. However, Ak Bauyr is open for single visits. 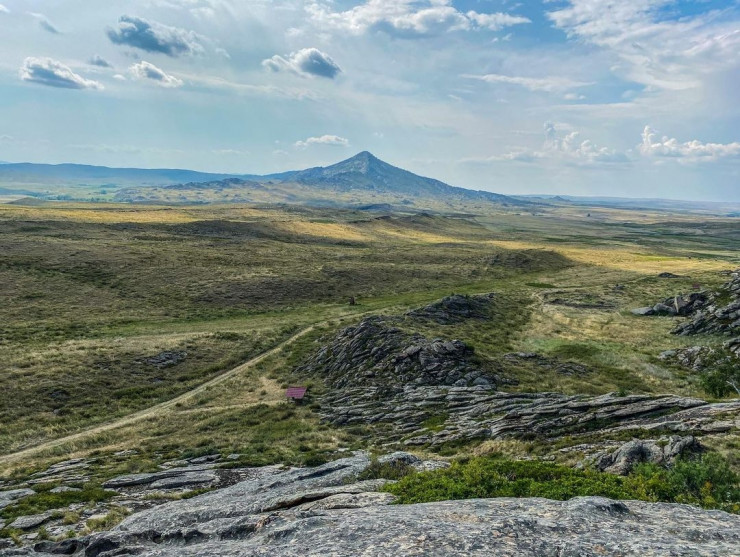 It is best to come to Ak Bauyr with a guide. He can tell about the interesting facts of this cave and show all the drawings, explaining their meanings. For the organization of historical and educational excursions, you can contact the companies that conduct excursions in Ak Bauyr and are located in Ust-Kamenogorsk.

Independently from Ust-Kamenogorsk, you can get to Kazakhstan’s Stonehenge via the Samara highway. You need to pass the village of Samsonovka, turn to the Sibinsky Lakes and the village of Sagyr. On the road there will be a sign “Ak Bauyr”.