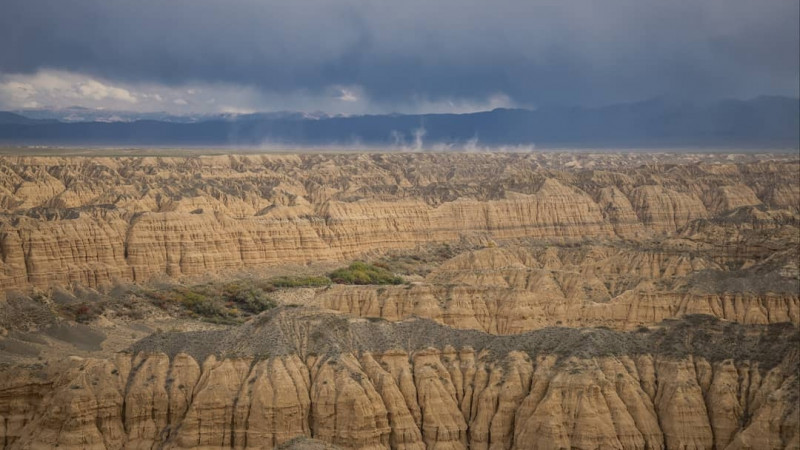 Moon Canyon, one of the most popular attractions in the Almaty region, was suddenly blocked by a fence for tourists. A photo of the incident was published on Facebook.

The tourist who published the photo, Almaty resident Alexander Okoneshnikov, complained that he could not visit the Lunar Canyon.

“Moon Canyon, hello and bye. Everything is surrounded by a fence and a gate, private territory, no entry. We collected a bag of someone else’s garbage and went to the observation deck, where there is just a garbage dump from tourists, despite the fact that there are two large garbage cans there, ” the tourist shared the news.

According to Alexander, he was on the spot on March 24. The gates were locked, the entire canyon was fenced off, and there was no way to cross it on foot.

“The fence smells like fresh paint. The height is 2.5 meters. It was built right into the walls of the canyon. There is a sign “Forestry” and a phone number, the guys in the comments say, the phone is fake. And the locals told them that they built or are building a swimming pool there, I think it can be checked with a drone, ” says the Almaty resident.

In the comments to the publication, Alexander was supported by other travelers.

Moon Canyon, also known as Yellow Canyon, is located between the Kuluktau Mountains and the Charyn River, 200 kilometers from Almaty. Despite its proximity to the Charyn National Park, the territory belongs to the Kegen district of Almaty region.

The mayor’s office of the Kegensky district explained that the territory belongs to the state, but is leased and the fence was put by the tenant himself. The land adjacent to the canyon is leased for 49 years. 30 hectares were leased back in 2007 for pastures.

“The above-mentioned plot of land under the decree of the akim of the Raiymbek district K. Kuder dated June 14, 2007 No. 553, 30 hectares of land for pasture, was handed over for 49 years to Dyuzbayev Kosai,” the document provided to the editorial office by the akimat says.

Also, the press service of the district said that, according to the tenant, the territory was surrounded by a fence not for their own needs, but for the protection of nature.

“Tourists come to rest, throw garbage, causing damage to plants and animals that graze on the territory. Trees were broken. Three trucks of garbage were taken out. And this year he planted trees, apple trees, apricots and carried out restoration work at his own expense. Now he went to a meeting with the head of the environmental institution, ” the press service explained.

Representatives of the mayor’s office say that they intend to talk to the tenant to allow tourists to visit the natural monument.

Yellow Canyon is also called Uzynbulak Valley or Yurt Valley. It is a clay rock of bizarre shapes, formed as a result of wind and water erosion. The canyon is called Lunar because of its similarity to the landscape of the Moon.

The total distance from Almaty to the Lunar Canyon is 203 kilometers. It will take about three hours to get there. From Almaty, follow the A351 highway to the bridge over the Charyn River. Then drive 4.5 kilometers from the bridge along the Almaty-Naryn road and then turn left onto a dirt road. Then it’s another five kilometers to the end of the road.