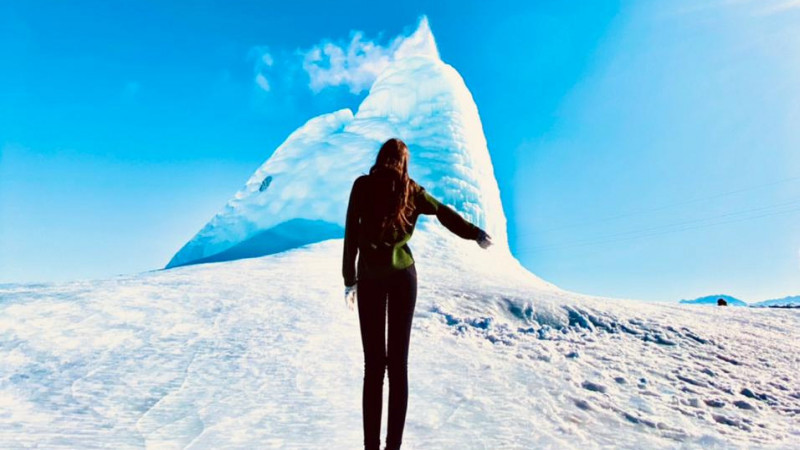 “Is this not an American submarine? “Kazakhstan’s” Ice Volcano ” has attracted the attention of the world’s media

The “ice volcano” in the Kegen district of Almaty region attracted the attention of the world media. So, several foreign portals have published articles about popular among people of Kazakhstan “the iceberg”. In the correspondent’s article Tengritravel.kz – about how foreigners reacted to the next Kazakh attraction.

“Wow, this is unbelievable! Mother Nature is phenomenal!”, ” Beautiful video. What a magnificent and very peculiar panoramic view”, “Are you sure that this is not another missing American submarine?”, “Close it immediately, we don’t need an eruption epidemic”, “Looks dangerous. Lock up the whole city to protect people”, “Better than another monolith”, – people from different countries write in the comments.

So, meteorologist Ernie Ostuno in February 2020 came across cone-shaped mounds of ice on an Oval beach in Saugatuck, Michigan.

“It was a great day to visit the beach and see how the waves interact with the ice, and see a couple of ‘ice volcanoes,’ “the National Weather Service tweeted at the time.

According to Kort Sfolten, a specialist with the National Weather Service of Grand Rapids, “ice volcanoes” occur in places where waves with a certain dynamics beat against the accumulated ice, and often occur along coastlines.

“However, this” ice volcano ” near Almaty was formed on the top of a spring. In summer, this area is dotted with green vegetation due to an underground spring, ” the newspaper writes.

Recall that the “volcano”, also called the beautiful “iceberg” by Kazakhstanis, is located in the Kegen district of Almaty region between the villages of Kegen and Shyrganak. Locals and tourists from other regions of the country often come here to admire the wonder of nature. Thanks to the fine particles of water that are sprayed high into the sky ,the “iceberg” looks more like a smoking ice volcano.