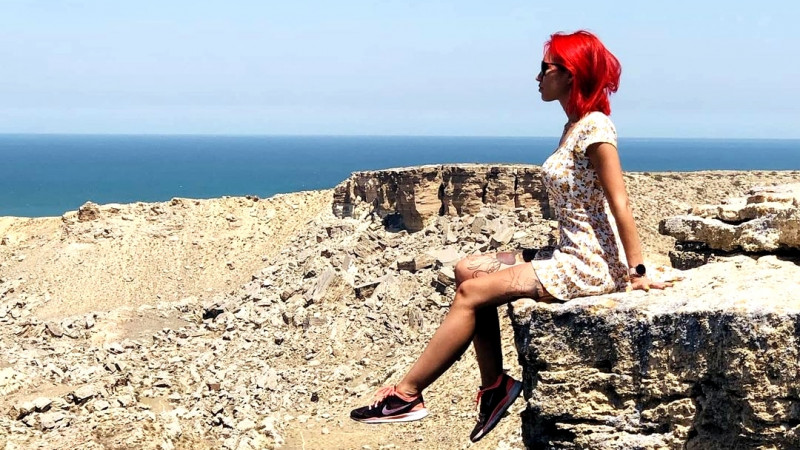 “It’s scary to the point of horror, but the place is grand.” Why do tourists go to Cape Zhygylgan

Cape Zhygylgan is considered one of the most unusual places on the Mangyshlak peninsula in the Mangystau region. Tourists who have visited here admire the beautiful views and are surprised by the unusual sight of the” fallen into the sea ” land. In this article, we will tell you about the features of this unusual place.

The edge of the boundless steppe is found. In the Tupkaragan district of the Mangyshlak peninsula, it breaks down with a stone wall in the shape of a crescent – almost flat, about three kilometers long. And some sources even indicate that the diameter reaches up to 10 kilometers. The height of this cliff in different places – from 50 to 200 meters. At the base of this wall, huge blocks of stone were scattered chaotically. And beyond them – the Caspian Sea. 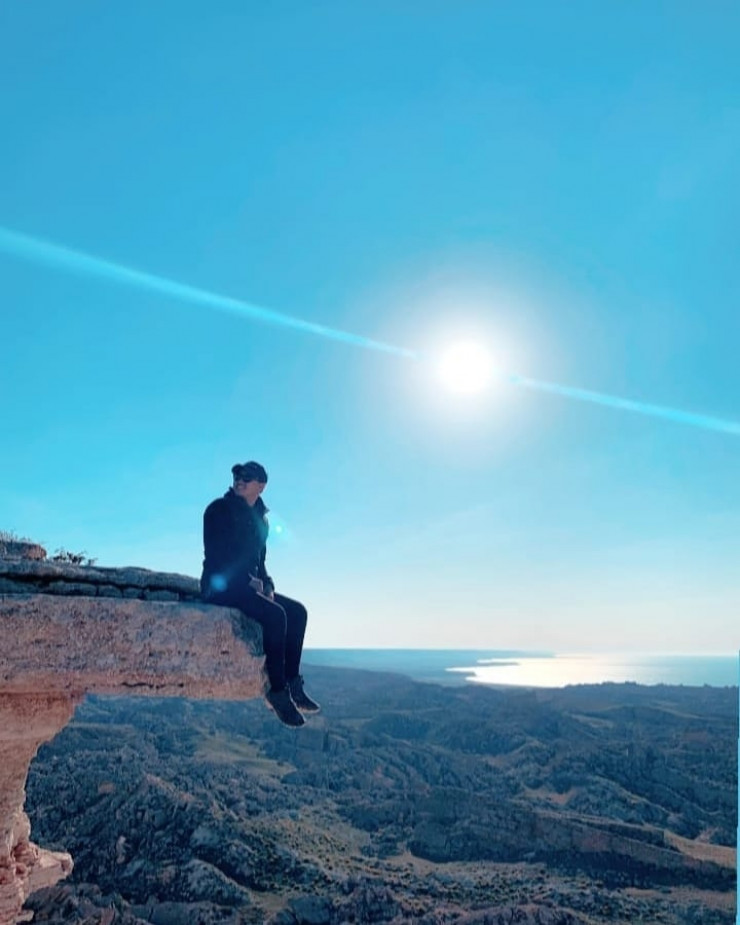 This place is called Cape Zhygylgan, which means “failure” or “fallen”. Local residents tell legends about the origin of the name.

“There lived in these parts a Paigambar, a holy man. Morning and evening he rode his horse to the coast to pray. His solitude was broken only by the sound of the sea waves. One day, after completing a prayer, Paigambar found that his horse had disappeared. The search was in vain. The man got angry and cursed the place. Since then, the coast has been covered with mud, the lake nearby has become salty, and once massive rocks have fallen down, creating a huge sinkhole – “Fallen Earth”, – says the legend.

Not far from the cliff is the” dead ” lake Kozdikara. A rare sight: a large azure spot against the background of yellow sands and dry saxauls. From some angles, the reservoir takes the shape of a heart. The history of the reservoir is not known for certain, but there is a legend that the lake is so deep that if a ram falls into it, then after a while it will be in the Caspian Sea.

The lake is salty, but you can swim in it. The water is dense enough to keep the body afloat. Nearby there is a spring with fresh water.

Tourist Zhanna Nurbayeva visited Cape Zhygylgan with her family. She says that what she saw did not leave anyone indifferent from the participants of the trip.

“You need to see it with your own eyes. A huge mountain range with a giant depression in the shape of an almost perfect circle, littered with rocks. It is located on the shore of the Caspian Sea, but, unlike other capes, gentle and smooth, it is rocky, and the slopes are strewn with broken stones. The maximum height of Cape Zhygylgan is 200 meters, the diameter of the depression is four kilometers, ” she says.

A resident of Aktau says that, being in that place, there is a feeling that this depression was formed quite recently.

“It seemed to me that this crash just happened, along the edge of such huge cracks and you can see how piece by piece fell off. Although they are thousands of years old. I am very afraid of heights, standing on the edge, which is separated by cracks and the strongest wind blows, for me it was a training of willpower, ” Zhanna shared.

Other tourists also tell about the unusual emotions of fear when staying at the “edge of the earth”. Traveler Saltanat Ospanbekova even said that the next time is unlikely to return to this place.

“Not a second time. I was so scared, so scared. There are rocks, rocks, and steep, dizzying cliffs all around. Adrenalinchik got a shock, ” she wrote in her publication.

Traveler Anastasia also shared her impressions and says that the place is energizing.

“I come to this place several times every year. There is a road. There are several viewing platforms. But you have to see it live. It’s breathtaking. Really, the fallen earth, ” she says.

Nadezhda Vadodaria considers her trip to the cape a real way out of her comfort zone.

“The gorgeous nature of Mangystau, Zhygylgan – an incredibly beautiful place, a lake with thermal salt water and therapeutic mud, a lighthouse occupied by children, what a panoramic view opens from the top of the mountain to the sea, to the “fallen earth”, like an old abandoned city in the middle of the steppe, the richest flora and fauna in these places. The children walked all the way, many swam in the lake and took natural mud baths, even my sneaker participated in a free “spa treatment”. In this place, the reset takes place, there, far from home, you realize how little you need for happiness, nature itself whispers in your ear, how beautiful this life is. The weather was crystal clear, no breeze, a sunny pleasant day, thank you for the trip, ” the traveler writes, sharing beautiful pictures.

What was here millions of years ago

Scientists suggest that millions of years ago, the entire Mangystau region was located in the coastal part of the ancient Tethys and Paratethys oceans. This allowed many representatives of the terrestrial and marine fauna to live in these parts. This explains the diversity of the landscape: plateaus, depressions, deserts, mountains and mountain ranges. Not only near Cape Zhygylgan, but also on the entire peninsula, you can see traces or remains of ancient animals and fish. So, paleontologist Vladimir Yartsev in an interview says that Mangystau can be called a paleontological museum. This unique place is a treasure trove for representatives of his profession.

“Surprisingly, there are several species of ancient sharks that lived only in the territory of modern Mangystau. Posting posts with photos of the teeth found by these sharks, I receive dozens of messages from highly specialized collectors with requests to sell these teeth, ” says Vladimir. 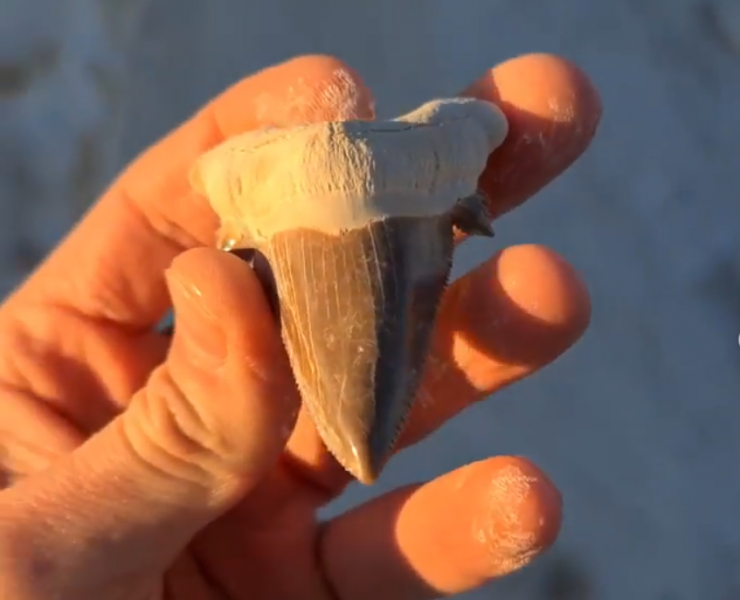 Teeth of the fossil Otodus shark (this shark was the ancestor of megalodon) Photo by Vladimir Yartsev, @hedgehog_1979

Vladimir says that such finds are found everywhere in the coastal zone and some of them are state – level. One day, at the end of May 2019, Vladimir found the vertebrae of an ichthyosaur skeleton. A very large individual. According to a professional paleontologist, its length was 12-13 meters. Now it is in the Aktau Museum. He also found skeletal fragments and teeth of a Paleogene dolphin, a swordfish. There are many small finds – teeth, ammonites, fragments of skeletons of fossil animals.

“I only post about 10 percent of my findings on Instagram, and I just forget the rest. Sometimes I remember later, but usually I don’t put up much interesting stuff at all,” Vladimir writes in his publication. 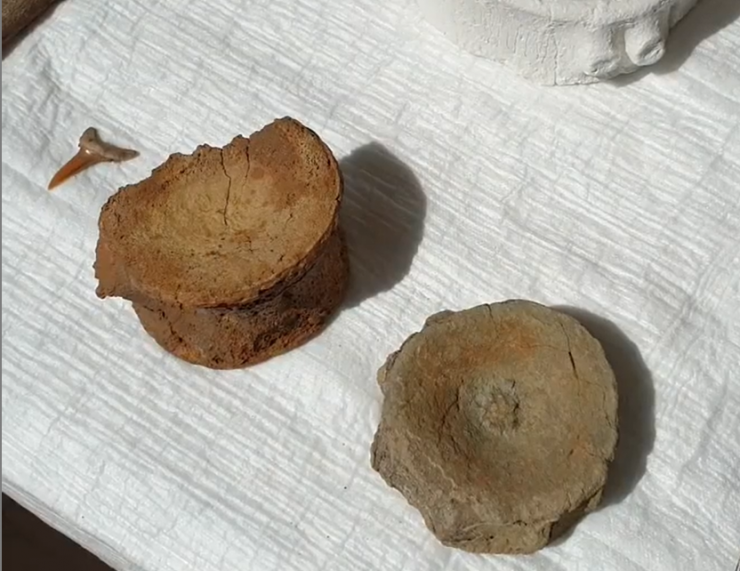 A tourist Sergey Malyshev shared photos from Cape Zhygylgan on his Instagram account, which, as it is written in the publication, show traces of the ancestors of horses and saber-toothed tigers.

“Zhygylgan uncovered hidden layers of rocks, in some places on the stone blocks you can find traces of hipparions and mahairods (the ancestors of the horse and saber-toothed tigers). It was very interesting, because these traces are millions of years old. In some places, the traces were on the vertical walls at eye level, ” Sergey signs the photo.

There is no way without a car here. It is impossible to get to these places by bus, taxi, bike and bicycle, and you do not know how long it may take. You can hire a jeep tour in special agencies. Usually, a visit to Zhygylgan is woven into the thread of the route along Mangystau, because it is far to go just for the sake of it.

From the city of Aktau, you need to move towards the village of Taushik-a little more than 90 kilometers. You pass Taushyk and drive about 40 kilometers towards the city of Fort Shevchenko. Then there will be a sign to the Sultan-epe mosque-here you go to the right, after two kilometers you will pass Kenty-Baba, after two more-Sultan-epe. Further towards the village of Bautino, go to the Zhygylgan sinkhole – about 35 kilometers. There are no signs here, you need to be able to use maps. Score a point and go to the goal. From a distance, Zhygylgan can be identified by a small lighthouse standing on the top.

It is not recommended to put up tents because of the abundance of vipers. There are a lot of snakes in the area. It is better to take food and water supplies with you from Aktau. The distances are large, there are few settlements, and therefore it is necessary to prepare for various situations. We recommend that you use the services of local guides when traveling for the first time.