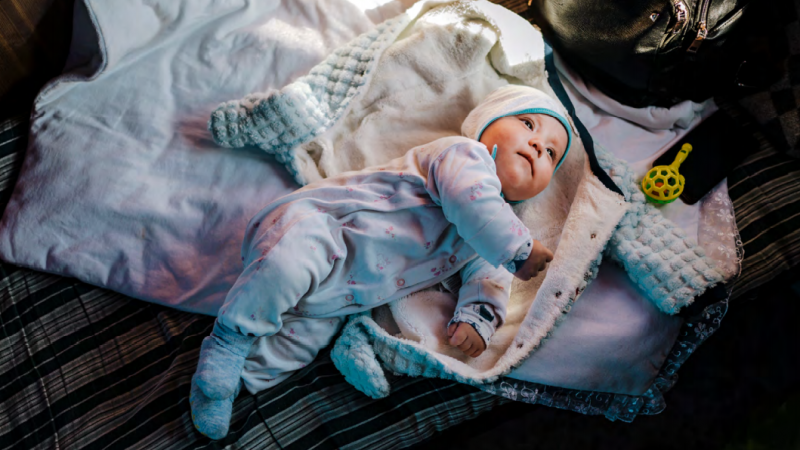 “The endless romance of the railways”. 20 images of a Berlin photographer from trains in Kazakhstan

In the fall of 2019, Berlin-based photojournalist Mario Heller made a 7,500-kilometer journey through Kazakhstan. He traveled around the country by train. Communicating with local residents in a reserved car, the man crossed Kazakhstan several times in two and a half weeks. In this article, we offer you to look at life in Kazakhstan trains through the eyes of a foreigner.

During the trip to Kazakhstan, Mario Heller collected the stories of his fellow travelers. And these stories helped him learn more about the country than the thousands of places he visited. Mario also said that he liked the Kazakhs very much. Several locals helped him with the organization of the trip and on the road. The whole trip was accompanied by a guy with whom they communicate now. And after that, Mario even held an online master class for students studying photography. The photographer says that Central Asia has always attracted him. And he certainly wants to come back here. 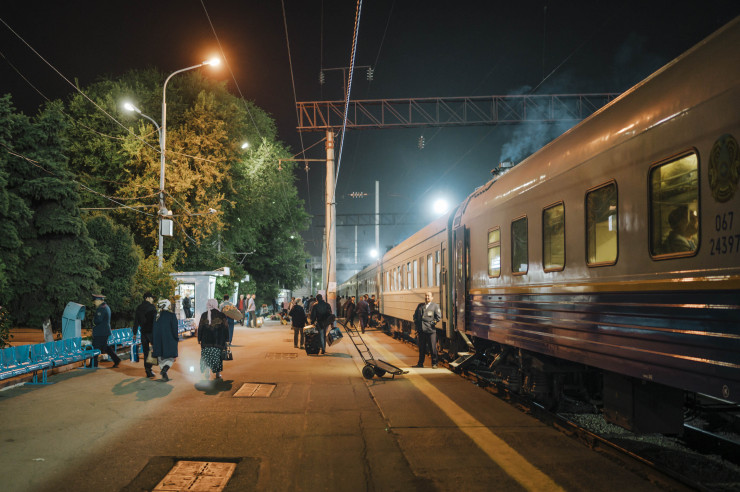 Mario traveled to many countries: remote areas in the north of Thailand, where he showed village life in bright colors. In Kosovo, he made portraits of young people who are suffering from European sanctions and the fact that the state is still not recognized by the world. There was a project in Tajikistan about the Pamir Mountains and in Russia about different lifestyles. You can find out about all the photographer’s projects on his website www.marioheller.ch or on his Instagram.

When asked why Mario chose this particular mode of transport, he explained that he had always been fascinated by trains. In general, the idea was to collect stories from trains around the world, but unfortunately, the project was interrupted by a pandemic. Below are some photos and text in which the tourist shares his impressions, thoughts and stories that he has collected. 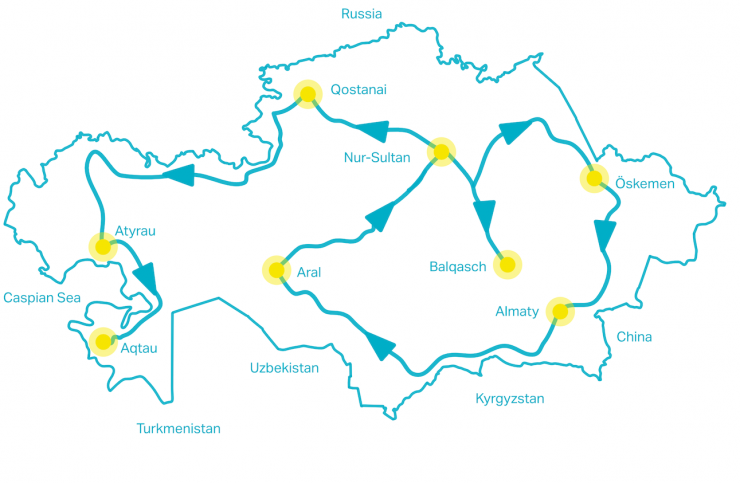 “It’s almost midnight. Endless darkness passes by the window. A monotonous rumble accompanies me all the way through the steppes of Central Asia. The air smells of food and the breath of a dozen passengers. There are various sounds everywhere: snoring, children crying, folk music and voices. This was the beginning of my journey across Kazakhstan by train.

A few days ago, before the start of the trip, looking at the map of Kazakhstan, I was surprised by its size and wondered how people generally move around such a huge territory. I was also struck by the fact that the entire railway network is only 16,000 kilometers, which is much less than in most European countries. Although the area of Kazakhstan is larger than the whole of Central Europe. To learn and understand in more detail, I locked myself in the Kazakh cars for several weeks.

Each trip on one of the Soviet heritage trains is a kind of microcosm, filled with characters of all ages, social and cultural traditions. And all this nostalgic atmosphere of the past is combined with modern life. It’s not just a trip. It is a journey through time through the stories of people, the history of the country and the endless romance of the railways. 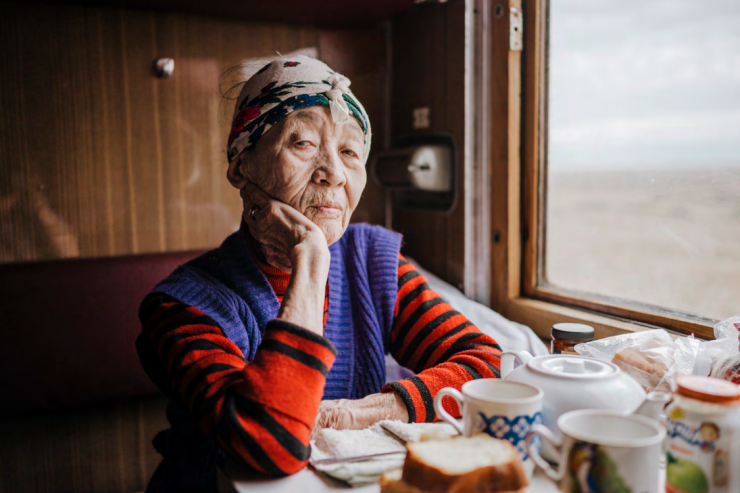 “In fact, I spent several years on trains and during my travels I made hundreds of acquaintances. I am now almost 80 years old. And although plane tickets are quite affordable, I still prefer to travel by train. Time seems to have stopped here. At my age, there is no hurry, and I fully enjoy such trips.”
Dina, 79 years old. Photo by Mario Heller 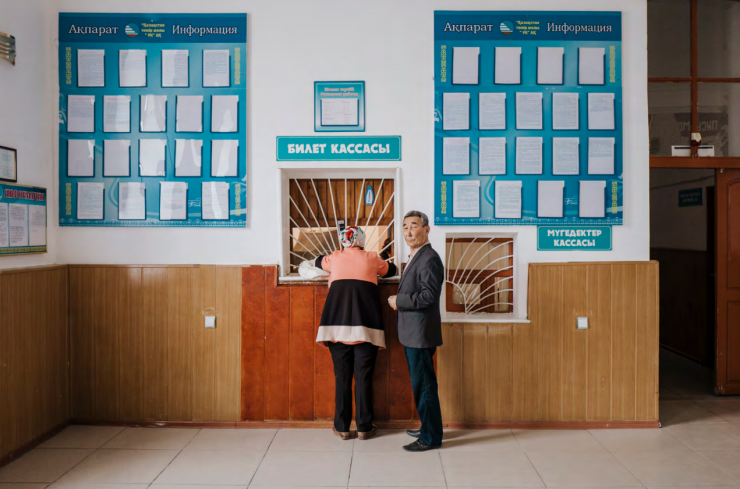 Railway stations in Kazakhstan are a kind of museums of the Soviet Union. Paintings and busts of the time often adorn waiting rooms. 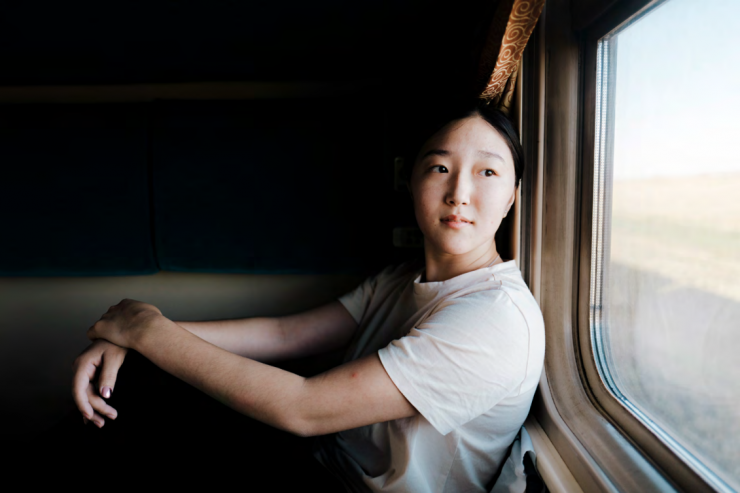 “This train is now only a few stations away from the main destination. In most cases, the train arrives on time, but from time to time it makes unusual stops, for example, when people live far from the station. Just like in real life: you should always be ready to stop, even if the stop seems unnecessary. There are no direct routes. So does the train: it never goes straight to the terminal.”
Aliya, 20 years old. Photo by Mario Heller 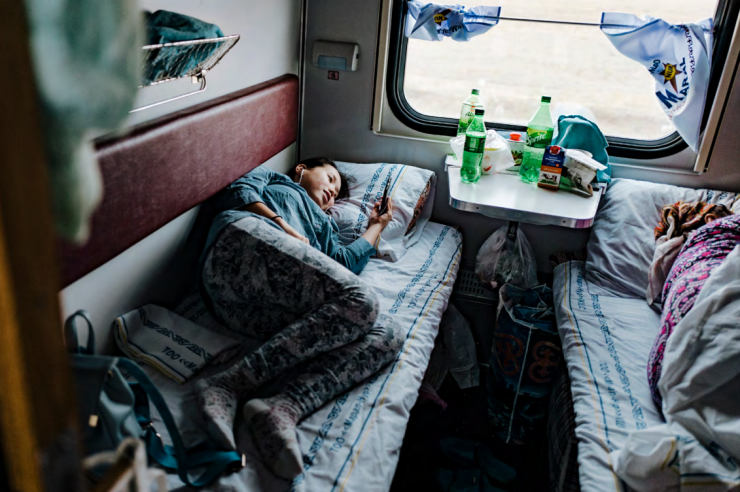 In small compartments called “compartments”, four complete strangers gather together for a journey. Sometimes there are conversations, but more often people are sleeping or watching a movie on their mobile phones. 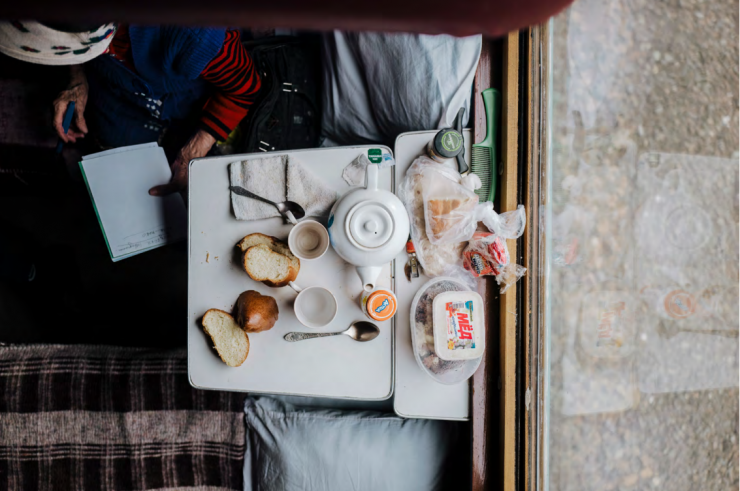 Food plays an important social role in Kazakhstan. In the compartment, passengers constantly share food with each other, which is considered a sign of respect and hospitality. Dishes, cups, and teapots are arranged on small tables. 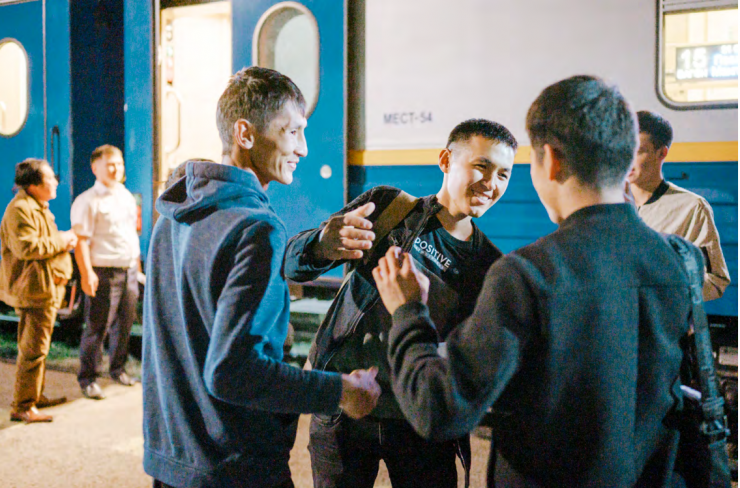 Most long-distance trips start and end in the former capital of Almaty. The train station is usually very busy in the late evenings. Passengers say goodbye to each other, bargain with the guides about the amount of luggage and get settled in the cars. 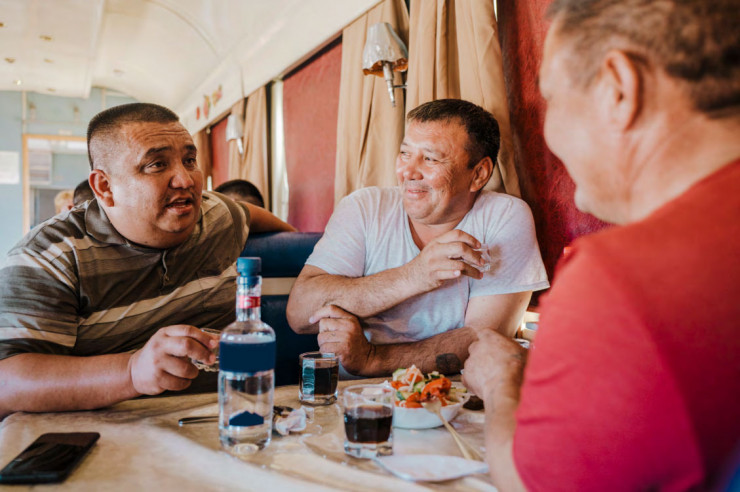 There is always a bright atmosphere in the Kazakh dining cars. The car is filled with laughter and the smell of borscht. The waitresses bring one bottle of vodka after another, mostly for male guests. 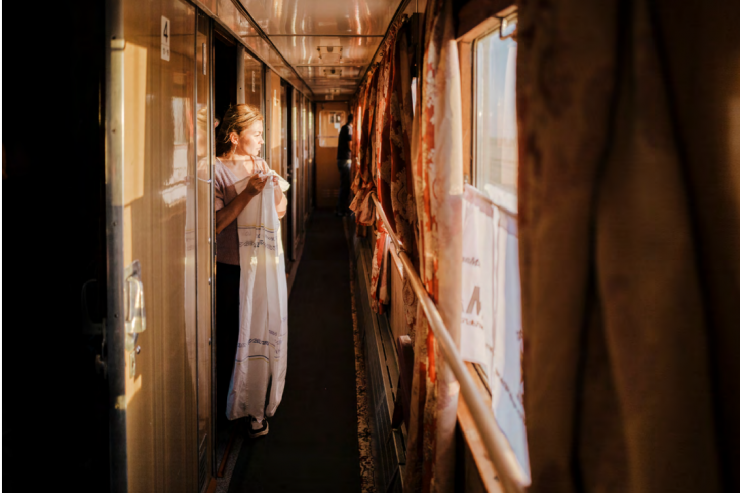 In the morning, after waking up, the bed linen is carefully folded and handed over to the train conductors. It’s a kind of ritual to pay homage to the work. 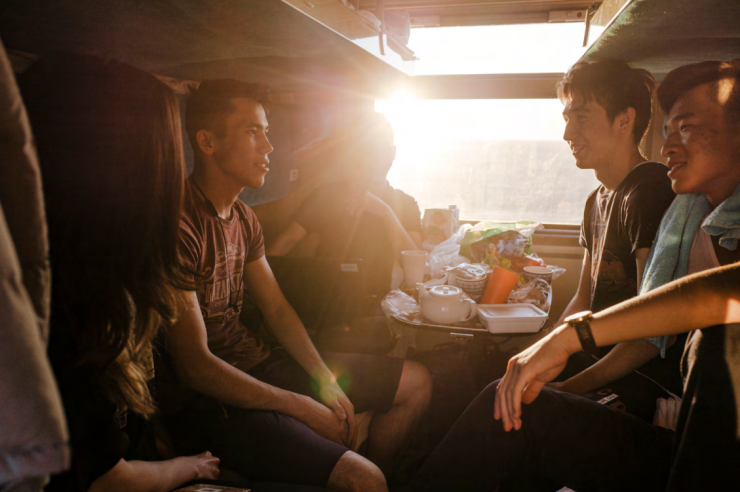 More than half of the residents of Kazakhstan are younger than 29 years old. Young people believe in themselves and that the future belongs to them. However, the culture is rooted in the custom of honoring older people and respecting family values. This is reflected in the social structure of society. 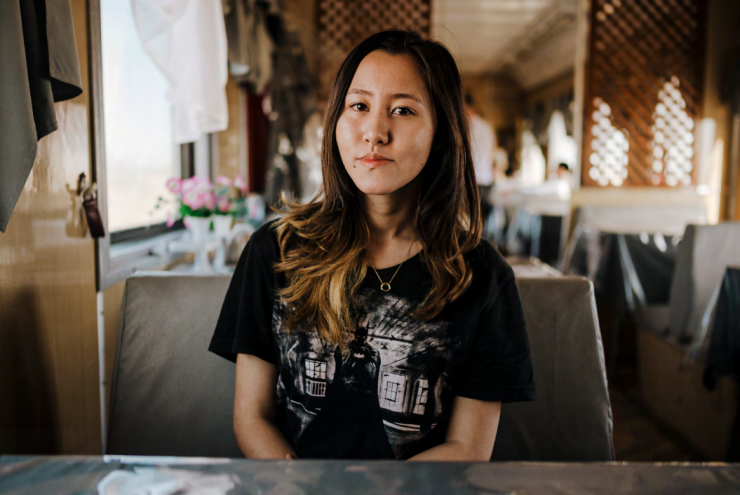 “Despite external factors, I am very lucky to be able to study at a good university. Although, perhaps, our education is on a different level. Compared to young people in Europe, we are more attached to our family and more patriotic. I am fully focused on studying my specialty – computer technology-in Nur-Sultan. This is the future of humanity.”
Camilla, 19 years old. Photo by Mario Heller 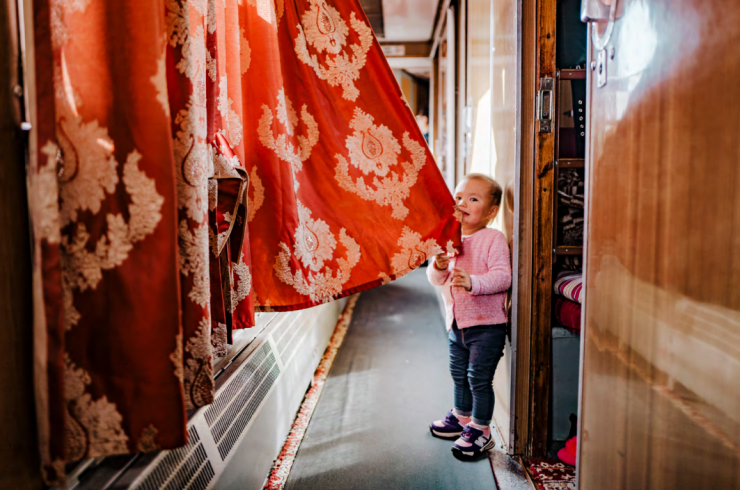 Often people travel as a family with children. Some of them even play football in the corridor of the cars, while others just explore, discover and touch everything that is possible. 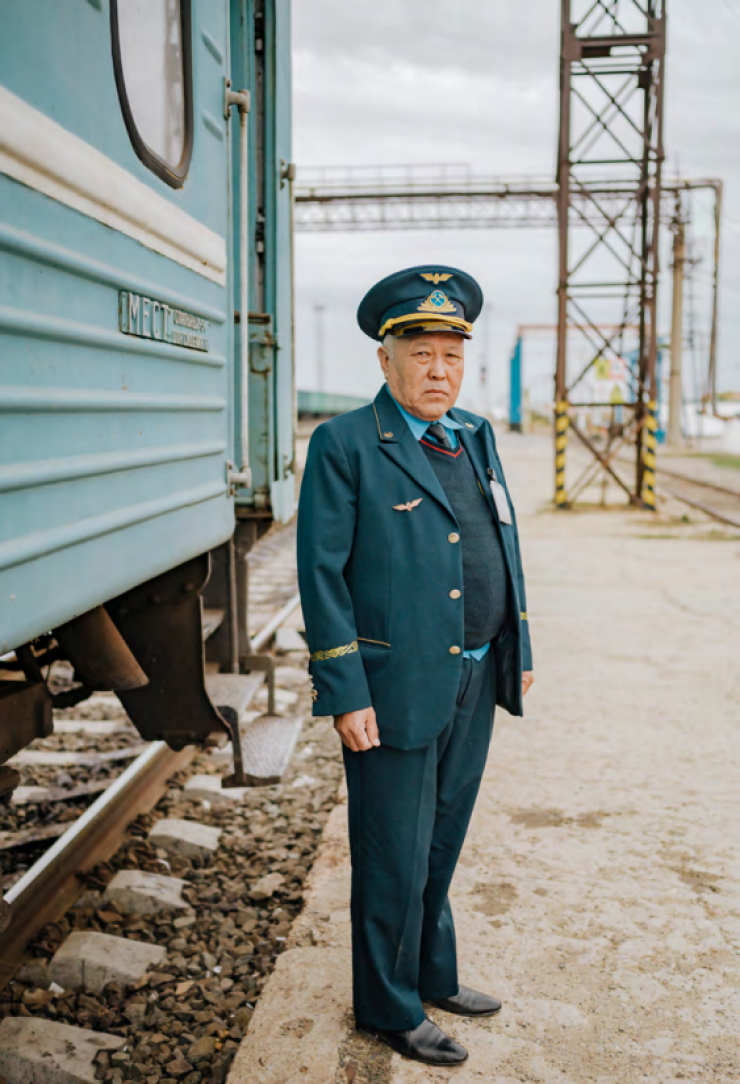 “For 30 years, moving trains have been my second home. My grandmother worked as a conductor. I used to go with her a lot when I was a kid. My job is not just to control the availability of tickets. Sometimes I feel like a psychologist. Over the years, I had to observe a variety of people. Some seem happy, others sad. Sometimes I give people advice, sometimes I laugh with them, sometimes I just listen and keep quiet. A prerequisite of my profession is goodwill.

Often I think that nothing can surprise me anymore, and then something completely unexpected happens: sometimes an old man falls from the top shelf and has to bind up a broken arm, or a woman gives birth to a child in my car. I’ll be retiring soon. My seven daughters are all married and have children. I don’t think I’ll be bored, maybe I’ll do some gardening.”
Marat, 63 years old. Photo by Mario Heller 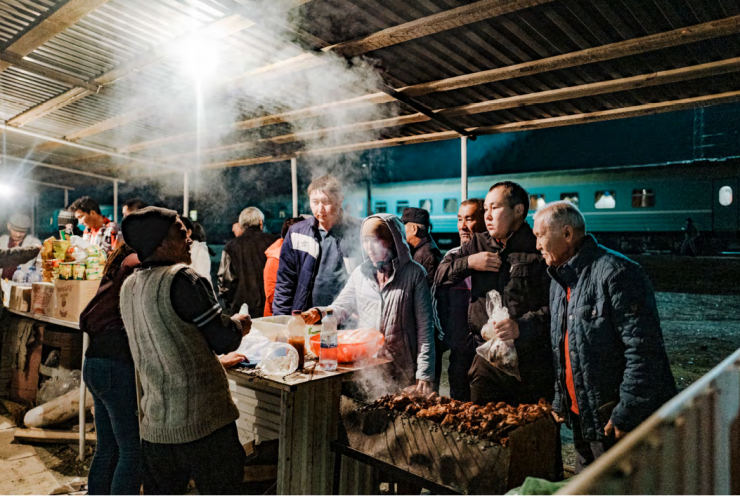 Many long-distance train stations attract a large selection of small grocery stores or even snack stalls. They are open and receive people here until late in the evening and at night. 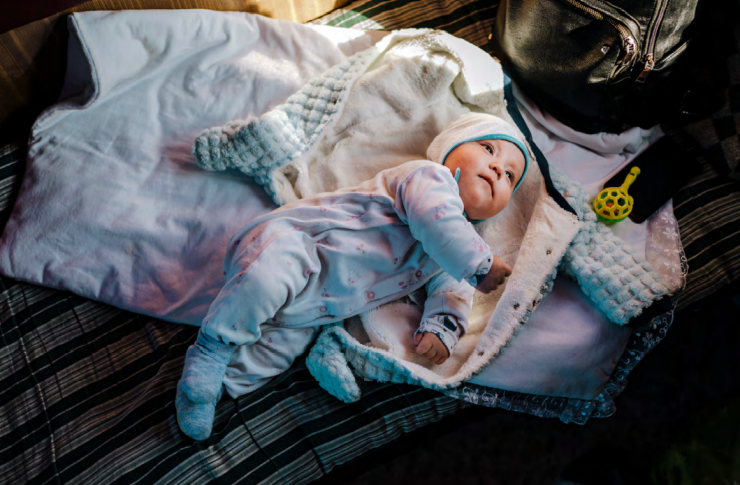 The importance of rail transport in Kazakhstan is high: 52 percent of passenger and 49 percent of freight transport is carried out by rail. 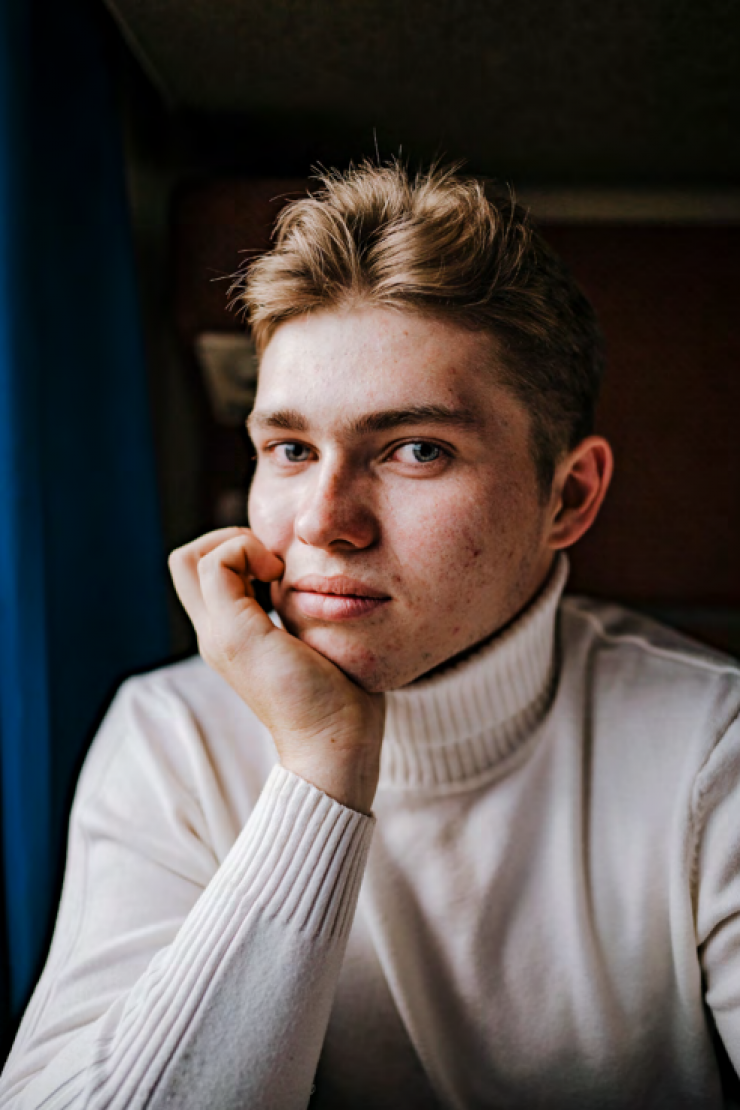 “We say: it is important to keep warm in the heart and cold in the head. These words have often come to my mind since I started training to be a lifeguard. My parents were initially worried that I was risking my life every day, but when they realized how much I believed in this path and how long I had been preparing for it, they realized the importance of my chosen profession.

Sometimes even an experienced and qualified lifeguard can not cope with the situation alone. My biggest concern is that I may not be able to save someone in need – fortunately, this has never happened before. I am now on my way to visit my parents, who live four hours away from Nur-Sultan. I like the train ride because you can always meet new people and think about life.”
Alexander, 20 years old. Photo by Mario Heller 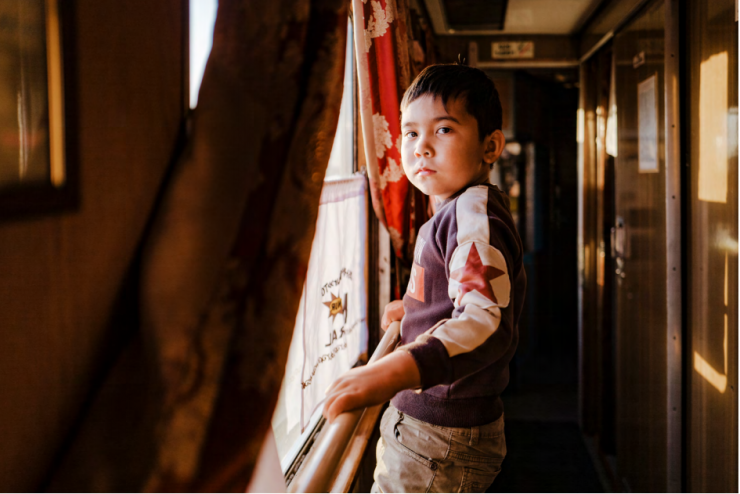 The corridors in Kazakhstan’s railcars are a favorite place for passengers to stay. People often dreamily stand at the windows and watch the landscape or talk on the phone with their loved ones. 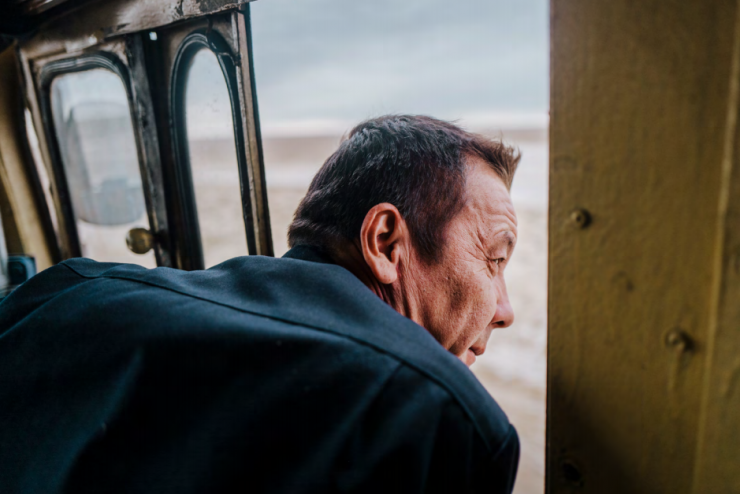 To become a locomotive driver in Kazakhstan, you need a lot of time: first you start as an assistant, and then you drive a freight train for several years. Only then are you allowed to drive a passenger train. Locomotives in Kazakhstan are supplied not only from the former Soviet Union, but also from the United States. 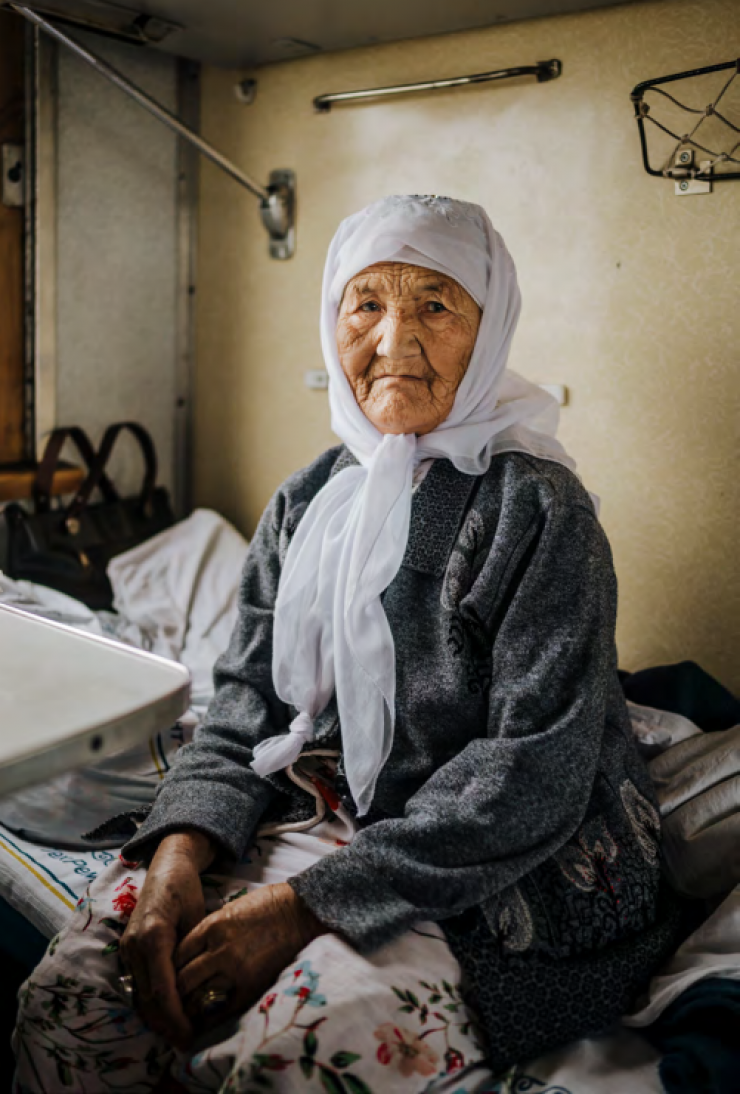 “We have lived in Afghanistan all our lives. We moved to Kazakhstan 11 years ago. We were the children of those people who were objectionable to the Soviet state. People like us were destitute and sent to camps. To avoid incarceration, my parents fled to Afghanistan with us children. Several thousand Kazakhs still live there. When I returned to Kazakhstan, I had mixed feelings: relief, joy and sadness at the same time.

Relief – because I was finally home, and sadness-because I had to leave all my friends and neighbors. But in the end, it was the right decision. Here in Kazakhstan, peace and quiet is the only thing I need at this age. Traveling by train is the most exciting adventure for me. You can drink tea all day, meet new people and watch the steppe from the window. It reflects my inner state.”
Reima, 82 years old. Photo by Mario Heller 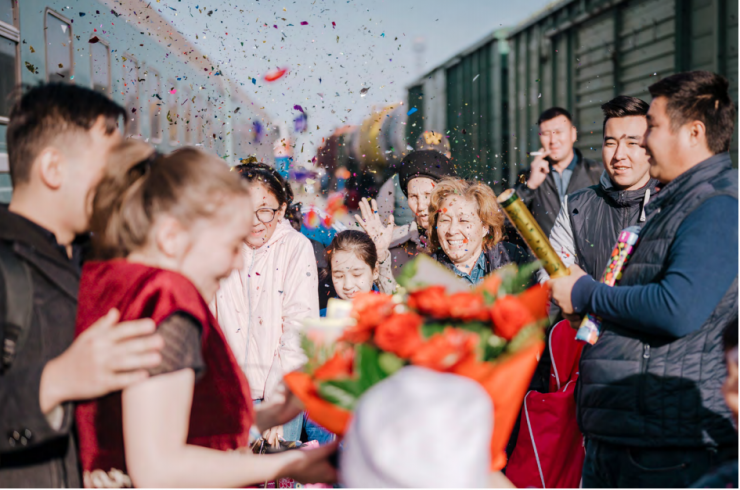 In Kazakhstan, there are three main reasons why people travel: work, weddings, and funerals. The traditions of Kazakh marriage oblige both the bride and groom to make several trips to their relatives from all over Kazakhstan. In the photo, you can see the arrival of the newlyweds in the groom’s hometown, ” writes Mario Heller.