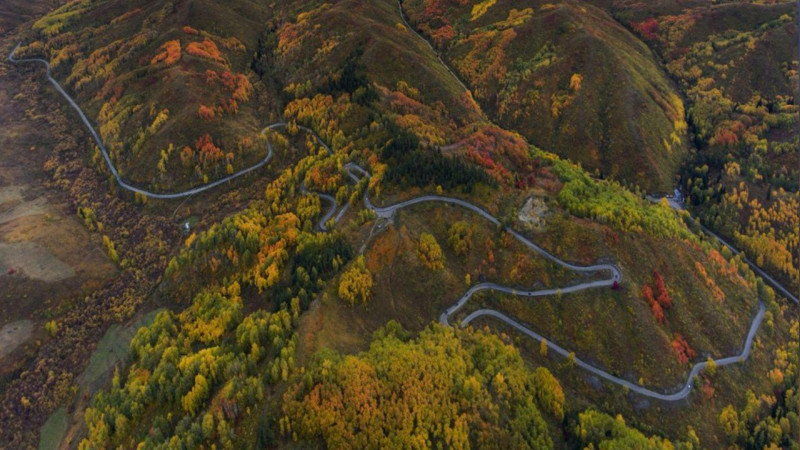 “From animal fear to a cry of relief.” What attracts tourists to the Osinovsky Pass

East Kazakhstan region is famous for its natural gifts – Katon-Karagay National Park, Mount Belukha, Rakhmanov Keys, Bukhtarma reservoir and many other picturesque places are located here. But they must be reached by one of the most dangerous and at the same time beautiful roads in the country – the Osinovsky Pass. In this article, we will tell you how this route appeared and what impressions a trip along the serpentine gives tourists.

Osinovsky Pass is located on the highway “Eastern Ring” on a section of 56-72 kilometers. It presents dizzying descents and sharp turns, almost at 180 degrees. The turns are dangerous, but the risk is partly offset by the amazing natural views that open up to travelers here.

How the Osinovsky Pass appeared

This highway, like many projects of the Soviet era, was built at a rapid pace. As a result, the convenience of travel was seriously affected. But there is a road that gives travelers an unforgettable experience.

“Guests of our region who first came to Zyryanovsk or Novaya Bukhtarma by road and drove through the famous Osinovsky Pass, especially residents of flat places, will certainly express their admiration for this route. Every entertainer or artist in the opening speech to the tour concert must share a storm of emotions from the stress experienced during overcoming this dizzying descent along a winding mountain road. The ascent to the pass is also exciting, but not for Zyryanov residents, who have long been accustomed to traveling to the regional center and back home, since the road now only takes about three hours, ” writes Saule Tleubergenova, archivist of the Zyryanov branch of the state archives.

The need to build a road in these places became quite serious in the late 1940s. The population here grew rapidly due to the development of the Zyryanovsky mine and processing plant, and the only sustainable mode of transport was water-on the Irtysh River, cargo was delivered by barges, and in winter, horse-drawn on the ice of the same river. But for a short period of navigation, the rivermen did not have time to process a huge flow of cargo, and you can not transport a lot of cars on horses and an insignificant fleet of cars. East Kazakhstan at the beginning of the XX century was literally suffocating from off-road conditions. Therefore, in 1940, it was decided to lay the gravel road “Eastern Ring” and on July 16, the builders reported that the construction of the road in the East Kazakhstan Region was completed. 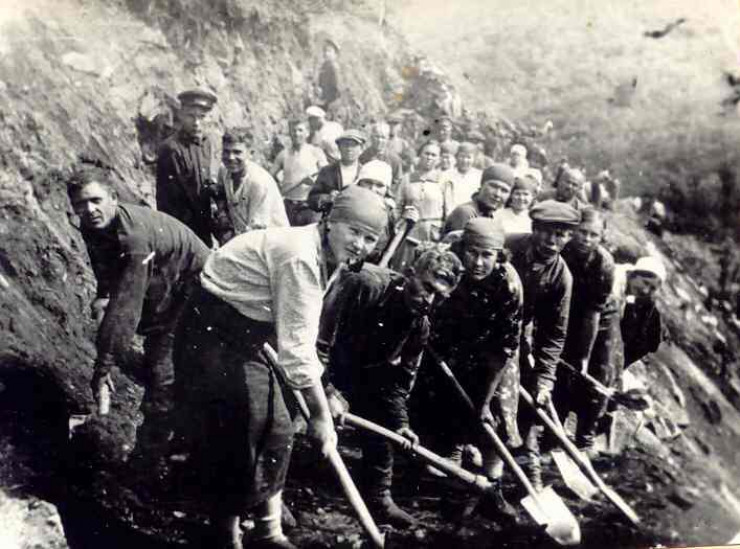 “Eastern Ring” – the route of heroism. In 72 days, workers laid more than two million cubic meters of soil in the roadbed and blew up tens of thousands of cubic meters of rocks.

The most difficult part of the road is the Osinovsky Pass. A poem is even dedicated to him:

“Here the wind is constant on the spot,
It’s raining down below, and here the grits are rustling.
“Osinovsky” treacherous pass,
But I’m not a fool, either.”

In these places, there is a legend about a girl who allegedly died during the construction of the road. Her name was Austra Birze, she worked as a member of the explosive brigade and impressed everyone with the accuracy of her work, she was respected by the builders. During one of the last explosions, a very large boulder fell at the edge of the road. On it, the artistic director of the cultural brigade, Grigory Ivanovich Badazhkov, built a star, inside which there was a pickaxe and a shovel. It was a kind of monument to labor. However, someone came up with the idea to say that under this stone lies the ashes of that brave bomber.

“This legend still exists today. Drivers working on this track, their predecessors instilled a firm belief that a girl died under a huge boulder, which is still decorated with a five-pointed star. But during the blasting work, people were taken out of dangerous areas. The proof of this is that the documents of the regional state archive contain correspondence with various organizations in Leningrad, which reflects unsuccessful attempts to find this brave girl with an unusual profession for women,” says the article by Saule Tleubergenova.

The road is periodically undergoing repairs. To help motorists, spherical mirrors were installed here before sharp turns. They allow you to see what is happening around the corner. And, of course, mirrors have become a favorite place for travelers to take photos.

Sergey from Almaty visited the Katon-Karagay National Park this summer. His path led through the serpentine. In his opinion, the pass is a very narrow road. On weekends, there are traffic jams and it is sometimes difficult to leave, but despite this, it is still worth visiting here. 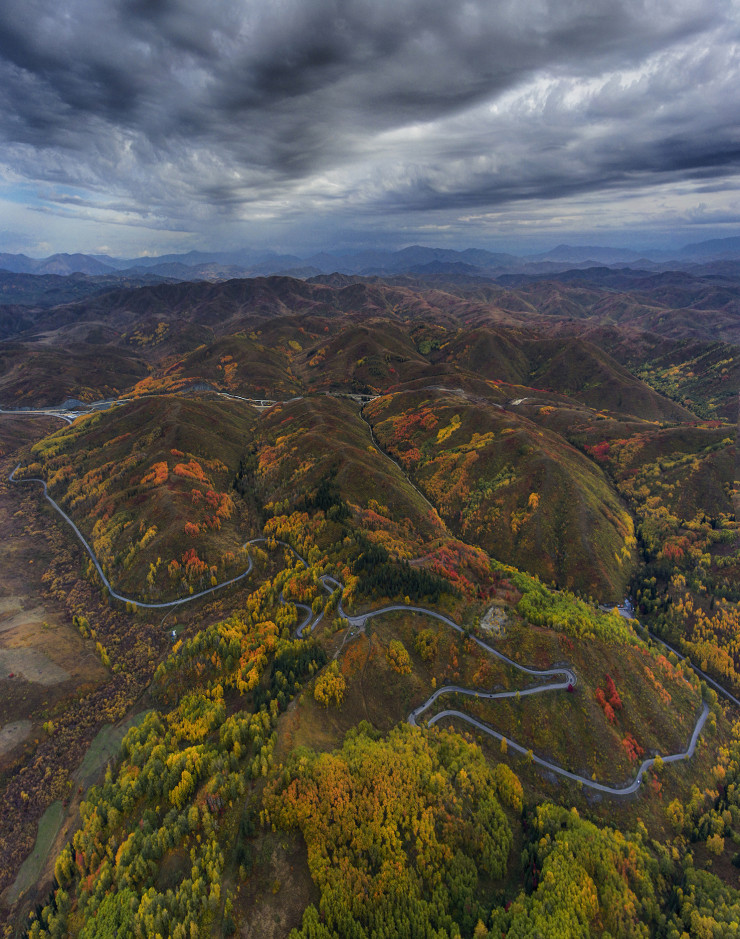 “The places are very beautiful: many trees, high hills. It may be difficult to climb on a bicycle, but you can walk on foot. Foreigners, when passing through the pass, stop to take pictures. And there is also the famous Cheburechnaya street, where many people stop for a snack. They cook very tasty food there, ” the Almaty resident shares his impressions of the trip.

By the way, it can be dangerous to drive along the serpentine in winter, says Sergey.

“You feel fantastic crossing the best high-speed sections of our track. I get a powerful charge of adrenaline from exorbitant speeds. I think you will experience the whole range of emotional range – from animal fear to a cry of relief – while overcoming a dizzying descent along the winding mountain road of the famous Osinovsky Pass, ” a resident of East Kazakhstan region shares his emotions.

This winding highway has repeatedly been included in the Kazakhstan ratings of “roads of death”. On the serpentine in winter, buses often turn over, cars fly off the highway, even road workers who clear the snow from the highway risk their lives. In 2011, there was even a cross with the inscription “Save and preserve”. Nevertheless, from a height, the road looks very beautiful and impressive. The local authorities recognized the road as unsafe, and already at that time the development of plans for the construction of a road to bypass the pass began. 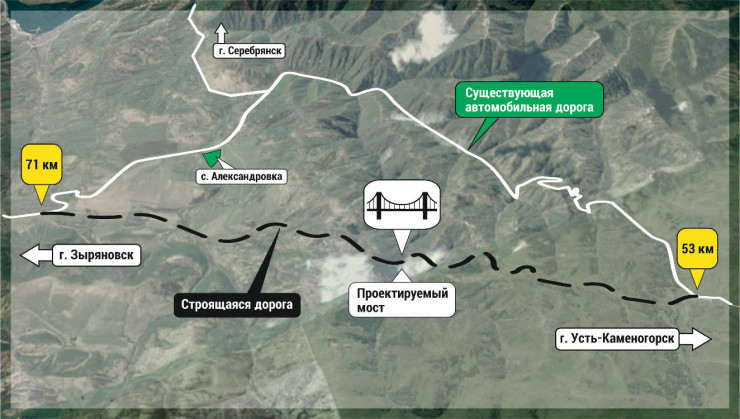 According to the plans, the bypass road will branch off at 53 km of the Ust-Kamenogorsk – Zyryanovsk highway and close at 71 km. The path will be shorter by six kilometers and will be smoother and calmer. Snow-bearing areas will be equipped with snow-proof reinforced concrete shields with a length of more than two kilometers, and snow-retaining structures will be installed in avalanche-prone areas. Metal fences and concrete parapets will be installed along the entire route, and lighting will be installed on the recreation area and on the bridge. A reinforced concrete crossing will be laid through the gorge approximately in the middle of the way. But construction has been delayed and is unlikely to be completed before the end of 2020.

The most dangerous serpentines in the world

It is worth noting that serpentines, which require courage from drivers, exist not only in Kazakhstan. So in Norway there is a track called the Troll Ladder. Its section between Ondalsnes and Walldal includes 11 hairpin turns and a 12-degree climb. This section is recognized as the most dangerous in Europe. The width of the road is only 3.3 meters, and the height difference here is 400 meters. 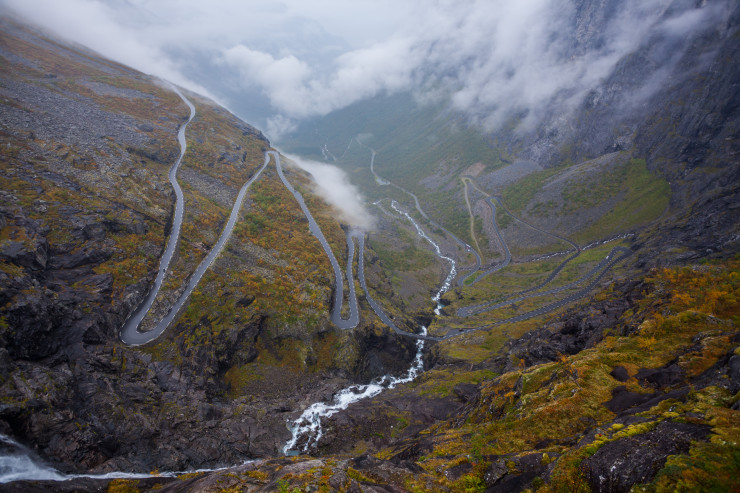 Scares drivers and serpentine on the Selvio pass in the Italian Alps. The view here takes your breath away, but you have to be on your guard – the road is full of steep bends. It is the highest asphalt road in Italy. The 50-kilometer stretch passes through Lombardy, Trentino and South Tyrol. 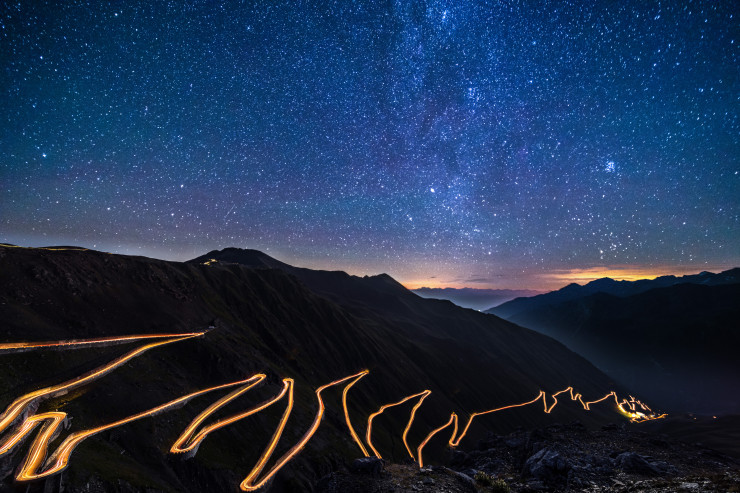 Guoliang Road is another prime example of folk construction. The tunnel is laid in the Taihang Mountains in Henan Province in China. The highway was built on the initiative of the head of the local village, which was cut off from civilization. The work was hard and dangerous, and some of the builders were killed. Today, the road is a particular danger to motorists, as it is not fenced with barriers. 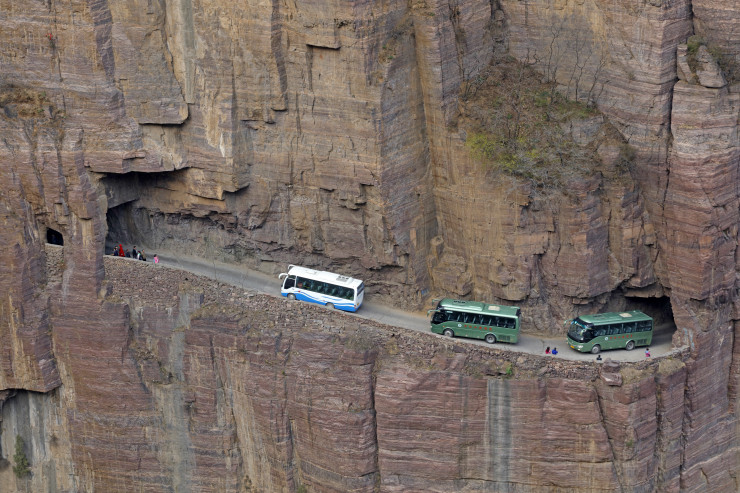 This track is also frightening just by its appearance. North Yungas Road is located in Bolivia. 200-300 people die here every year. The 43-kilometer road has one lane for traffic, the surface is unpaved. The road has no protective barriers. 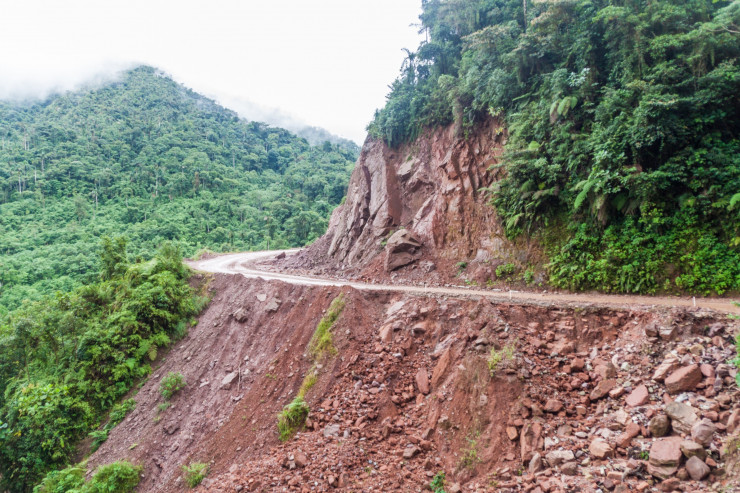 The serpentine Les lacets de Montvernier in France occupies a 3.4-kilometer section of the D77B highway between Saint-Jean-de-Maurienne and La Chambre. Translated from French, its name includes “shoelaces”. From the height, this road really looks like shoelaces that the giant left on the mountainside. This track is not easy, but it is ideal for cycling in the Tour de France. 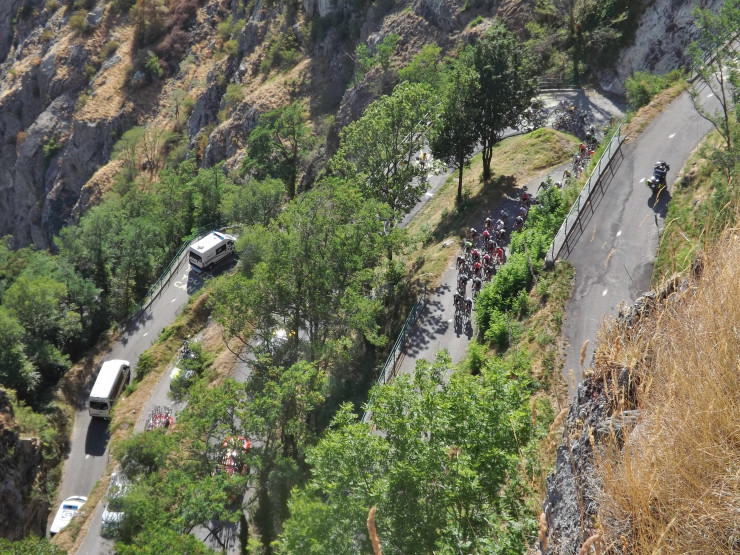 Interesting fact. By the way, sharp turns are popularly called “mother-in-law’s language”. Let’s just say that such an expression has an ironic origin: the word” mother-in-law ” has long been a common name among the people. Difficult turns, where you need to be careful – like communicating with a picky mother-in-law. You can wait for any turn of events, so you need to keep your eyes open and not relax.

What you can see when driving through the Osinovsky Pass

After driving along the serpentine and coming out on a gentle road, you can observe what most travelers come here for – the Bukhtarma reservoir, a bowl of blue water with sandy beaches and green slopes. The largest reservoir in Kazakhstan with an area of more than 5,500 square kilometers. It was created on the Irtysh River in 1960. On the coast, there are many recreation centers for tourists all year round. The water here is great for swimming, and the sandy beaches attract lovers of beach holidays and fishing. Travelers come here to take a break from the hustle and bustle of the city and stay closer to nature. In the bays and bays of the reservoir there are pike, perch, walleye, carp, crucian carp, burbot and trout, which makes fishing on the reservoir very popular. For fans of extreme recreation, here you can kite and surf. 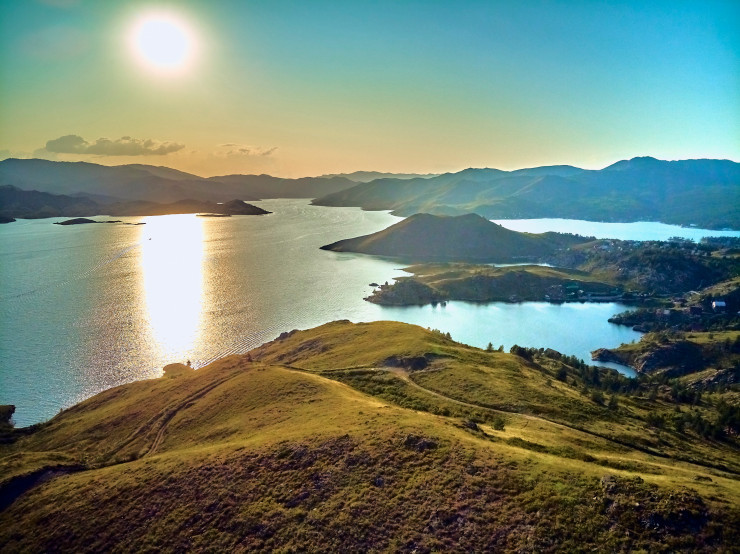 Rakhmanov keys, where the water temperature ranges from 34 to 42 degrees Celsius in the season. The water itself is filled with minerals. And the combination of radon and nitrogen in the water is optimal not only for bathing, but also for drinking. This place is considered not only and not so much a resort as a health resort. Fresh air and clean water are the main ways to improve your health on the Rakhmanov Keys. One of the most picturesque locations of these places is the Rakhmanovsky Waterfall. 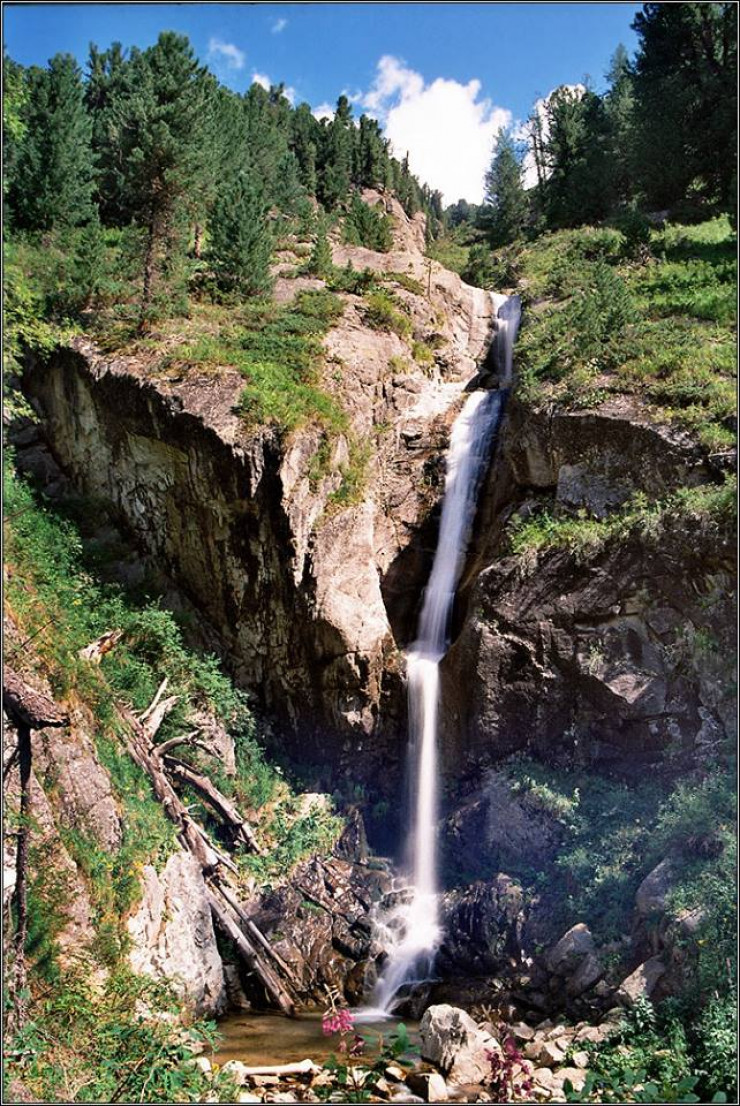 And of course, the Katon-Karagay National Park is the largest national park in Kazakhstan. This is the only place in Kazakhstan where marals are grown and valuable medicinal raw materials are obtained – antlers, which are valued on the world market because of the high content of biologically active substances. Here you can walk along the road that was built by Arnold Schwarzenegger’s grandfather, treat yourself in local pantotherapy clinics, see the most beautiful waterfalls and contemplate the highest point of the Altai – Mount Belukha. 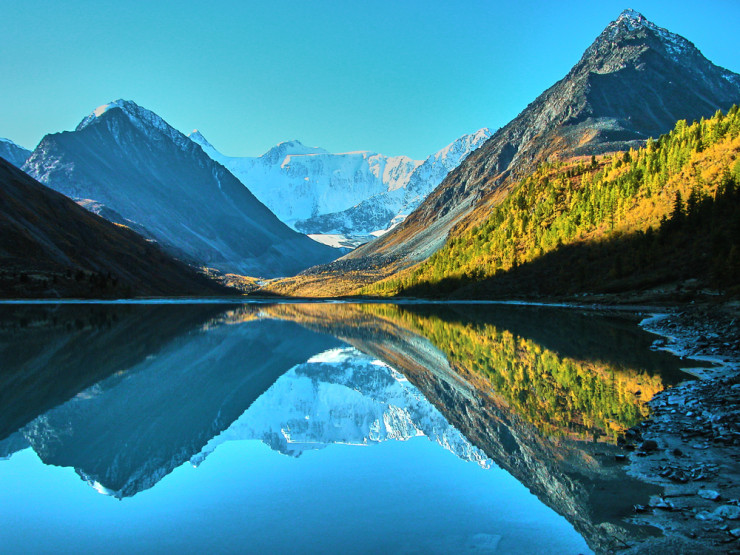 Keep in mind that this section of the route can be quite dangerous. Therefore, be vigilant when overcoming the Osinovsky Pass.