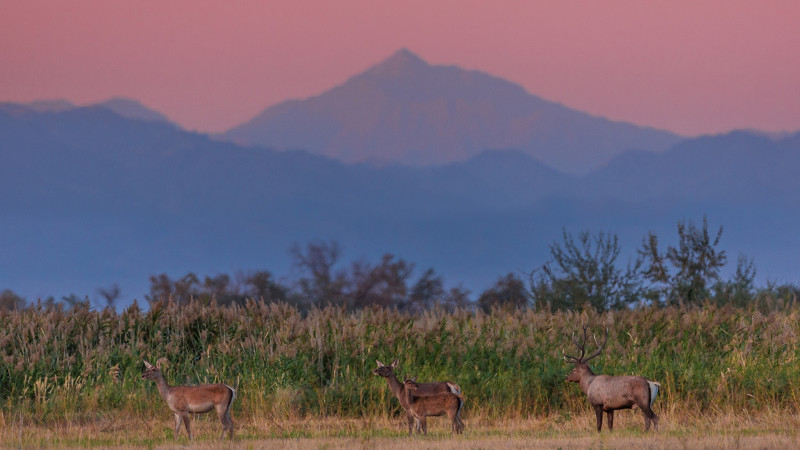 “Savanna in Kazakhstan” – an unusual landscape photographed by a naturalist

Looking at this photo, it seems that it is a savanna against the backdrop of Kilimanjaro or the Atlas Mountains. The unusual landscape was photographed in the state National Natural Park Altyn-Emel in the Ili River valley on the territory of the Almaty region. The author of the photo is one of the most famous naturalist photographers of Kazakhstan Vladislav Yakushkin. He told us how he got such an interesting picture.

The name of Vladislav Yakushkin can be seen in almost all photo albums dedicated to the nature of our country. A biologist by training, who has a long work experience at the Institute of Zoology of the Academy of Sciences of Kazakhstan, knows how to shoot animals: he knows how to approach them and when.

“The deer in the savanna that you liked are called hanguls. Of course, this is no savannah. Deer live in the tugai, in the forest thickets. Hanguls are one of the most beautiful subspecies of red deer. In ancient times, they were widely distributed throughout the Central Asian rivers, lived in floodplain forests. They could be found on the Syr Darya, Amu Darya and Ili. Due to the intensive development of agriculture and poaching, they were almost completely exterminated. In 1980, a couple of dozen hanguls were brought to the Almaty region to a protected area from Tajikistan, where they lived in several nature reserves. During this time, there were several hundred of them there, ” says Vladislav Yakushkin.

According to the photographer-naturalist, as soon as the number of hanguls increased significantly, they were moved to the Syrdarya National Park, the Altyn-Emel national park and the new Ile-Balkhash Reserve.

“We are returning to nature what was destroyed by man. Hanguls were brought from Tajikistan, and last year in the winter I was approached by representatives of this country with a request to send photos of deer. During the civil war in Tajikistan, they were almost completely destroyed. There are so few of them left that it is almost impossible to photograph them there, ” says the author of the photo with an unusual landscape.

All the deer in Vladislav Yakushkin’s pictures are captured in the cold season. The author of the pictures explained this by the fact that it is easier to see animals through the exposed tree trunks.

“As soon as the leaves appear on the trees, the deer shed their antlers. Wild animals are so well camouflaged that you will not notice if you pass by them. In addition, spring is the breeding season, and many animals become incredibly secretive. In the spring, you need to photograph migratory birds. They will now fly to the north, and there will be a lot of them on various lakes, ” he explained.

According to the naturalist photographer, the most expressive pictures on the plain can be obtained during the golden hour. The mountains can be photographed at any time, but the Almaty mountains are covered with thick smog at 11 o’clock in the afternoon, you can get a beautiful photo with them only after the rain and then if it passed during the day and the sky cleared.

The golden hour rule. The most beautiful images with natural light are obtained in the first hour after sunrise and within an hour before sunset.

To make a beautiful frame, sometimes it can take several hours, or even days. As Vladislav Yakushkin explains, it is not enough to use the golden hour rule, you need to be able to see the frame and have time to take a picture.

“You can wait for weeks in an ambush for the appearance of a particular animal-a wolf, a leopard or an argali. You need luck and very good technique. Without good technique, the photographer will be helpless. Our animals are not allowed close to themselves: this is not the savannahs of Africa or America, where animals walk next to you, and you can take a picture of them on your phone.

It is difficult to photograph an animal even in protected areas. The photographer must wait for the day, wait for the animal to turn the way it needs, and also be in close proximity to the animal,” says the master who creates unusual landscapes in the photo.

As Vladislav Yakushkin notes, there are many places with unusual landscapes in Kazakhstan.

“There are many such places. The Altai lakes are incredibly similar to the American reservoirs near Denver (Colorado). At home, I have photos mixed up with both, and no one can tell where they were taken. Regardless of where they were photographed, all the deserts are similar. This can be a photo from one of the national parks in the United States or here, for example, in Altyn-Emel. Straight one-on-one. You can make a mistake if you mix them up. The steppes are also similar. In Kazakhstan, you can find places that are surprisingly similar to the desert areas of Nevada, ” he says.

At the same time, the photographer assures that the comparison of the Charyn Canyon with the American Grand Canyon is unacceptable, since the “American” is made of continental rocks, and the Charyn is made of clay. In addition, they differ in size.

“I have been in almost all protected areas of Kazakhstan. This includes nature reserves and national parks. We have more than 20 of them. I worked as a correspondent and traveled all over Kazakhstan back in the Soviet era. My photographic experience is more than 40 years. Nevertheless, I continue to travel and take pictures, I always find something new, ” says Vladislav Yakushkin.

As the naturalist photographer says, to see the most beautiful autumn, you should go to the Altai or to the mountains of the Trans-Ili Alatau, and the most elegant spring is in the south of Kazakhstan.

“Autumn is amazing in Altai, just an eye charm: a lot of yellow and blue. It is also incomparable in the mountains of the Trans-Ili Alatau – there are bright, flashy colors. It is impossible to visit both places in the same season, you have to choose, ” says Vladislav Yakushkin.

Spring, according to the photographer, is beautiful in all regions of Kazakhstan, but it comes to the south the fastest.

“A curious spring in the Karatau Mountains. These are ancient mountains. There are an incredible number of endemics there. 10 percent of all plants here – with the title “karatavika”, namely Karatau. The remains of relict flora, relatives of those plants that live in Kazakhstan, are found far to the south, in the tropics. There is an extremely rare plant called Schrenka’s meadowsweet. A long time ago, the wood of this tree (it is such a semi-shrub, but once, probably, it was quite a tall tree) paid taxes. Pistachios also grow here. As far as I know, Karatau has the only pistachio groves in Kazakhstan. In addition, there are wild grapes and wild apple trees. And not just apple trees! This is exactly the same apple tree that gave birth, as scientists write, to all varieties of apples. Many scientists came to us to clone or take the seeds of those apple trees. Also, these apple trees are found throughout the south-east of the country, ” says the photographer.

As the naturalist notes, you can also find a large number of rare tulips in Karatau. Not far from Karatau, a new species of this flower was found on the river. In total, there are about 40 types of tulips in Kazakhstan.

In Almaty, Zhambyl and Turkestan regions, you can find, according to the naturalist, bright fields of various colors. Near Almaty, there are tulip fields, redwood (similar to poppies).

“There was a village near Almaty called Krasnoye Pole, now it has been renamed. It had such a name because in early May, a few dozen kilometers in any direction from the village, the fields were covered with a bright red blanket. They were either poppies or rimerias in bloom. They are similar in appearance, although the flowers are completely different. There was a case when a whole glade of these “poppies”was mowed down to the side or by someone. It didn’t do any good, of course, because they mowed down the rimeria instead of the poppy. This is not an opium flower, ” the naturalist shared his memories.