In the south-east of Kazakhstan, 250 kilometers from Almaty, is the national park “Altyn-Emel”. In this article, we will tell you what attractions attract tourists here.

The Altyn-Emel National Park was established in 1996. Its area is 307,653 hectares. The terrain is diverse, including deserts, semi-deserts, mountainous terrain, and the Ili River. 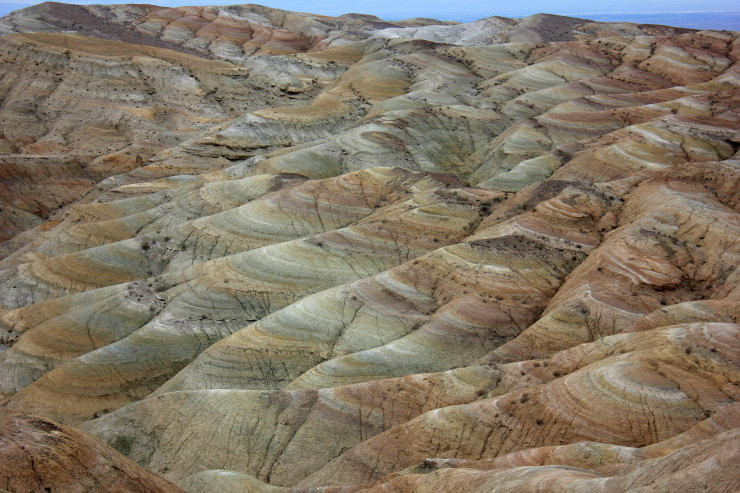 There is a legend that the name of these places was given by Genghis Khan, when he saw the mountains at sunset, he exclaimed ” Golden saddle!” Since then, this area has been called “Altyn-Emel”. One of the routes of the Great Silk Road took place on the territory of the modern park.

In 2017, the Altyn-Emel National Park was awarded the international status of a UNESCO Biosphere Reserve. According to Kazakh Tourism, the national park has entered the top 15 destinations of interest to tourists.

In the national park “Altyn-Emel” there is one of the most picturesque and unique places in the landscape-the Aktau Mountains. Because of their name, these places are often referred to the west of Kazakhstan, where the city of Aktau is located.

The Aktau Mountains are located on the site of an ancient sea that once filled the Ili Basin. As soon as the sea began to disappear, there were gorges and canyons of steep walls, stacked with colorful layers of rocks. Despite the fact that the name Aktau means “white mountains” in Kazakh, the local peaks have colors from green and red to mottled and white. The height of the canyons reaches 1,000 meters. The total area of the mountains is about 50 square kilometers. 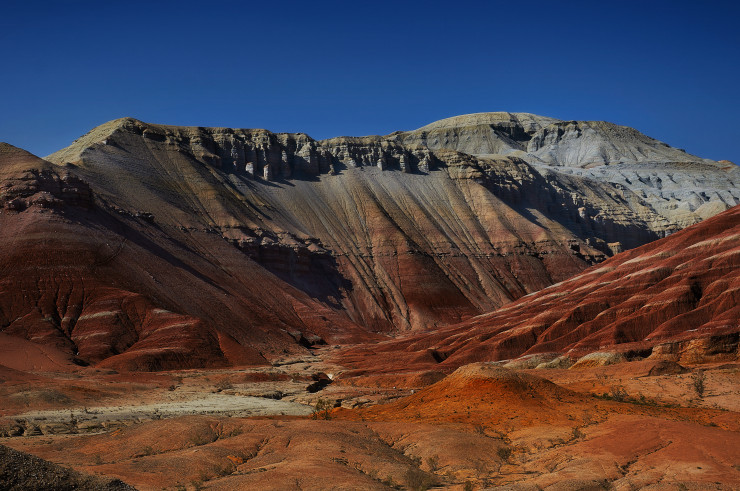 Here are found the remains of ancient animals that lived in different eras, such as marsh rhinos, crocodiles, shellfish, turtles, giant rhinoceros, mastodons, deer. The fully preserved skeleton of a marsh rhinoceros and three skulls were discovered during joint Kazakh-American expedition work in 1995-1997.

Sometimes mudslides descend in the mountains, which form in the higher mountains north of Aktau. The convergence occurs after heavy rainstorms in May and June.

The Katutau Mountains are located in the eastern part of the Altyn-Emel National Park. They are formed as a result of volcanic eruptions. The lava solidified and took many different forms, in the form of rocks and caves of dark red color.

In the state national natural park “Altyn-Emel” there is one of the seven wonders of Kazakhstan, the official monument of nature of national importance-the singing dune Akkum-Kalkan. This is a sand dune with a height of almost 150 meters, and a length of three kilometers. Around the dune is a rocky desert, overgrown with saxaul and small shrubs. There is one legend that tells that Genghis Khan and his loyal soldiers are buried under the sands of the dune. And the dune makes singing sounds when the soul of the khan ” tells his descendants about his exploits.” 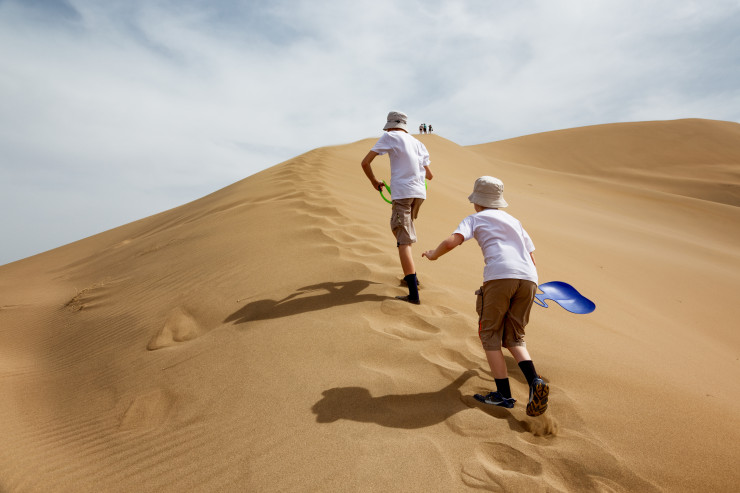 The colorful mountains of Aktau and Katutau, as well as the” singing “dune Akkum-Kalkan can be called the most” photogenic ” places of the national park. Visitors take pictures against the background of chalk mountains as if on Martian soil, or climbing a dune. Often, video clips are shot here, professional photo sessions are held, and films are shot.

The spring of Shokan Ualikhanov and the legend of Genghis Khan

Right at the foot of the dune, at a distance of 1.5 kilometers, there is a spring named after Shokan Ualikhanov. In 1856, during a trip from Russia to Kashgaria, the scientist-educator Shokan Ualikhanov rested here with his expedition. In his writings, he described the places he saw. It is believed that the water of the spring is healing. A relict turang grove is located nearby. Its age is several thousand years old. In summer, almost all the plants here burn out, but the turanga remains covered with foliage. Turanga is listed in the Red Book of Kazakhstan. 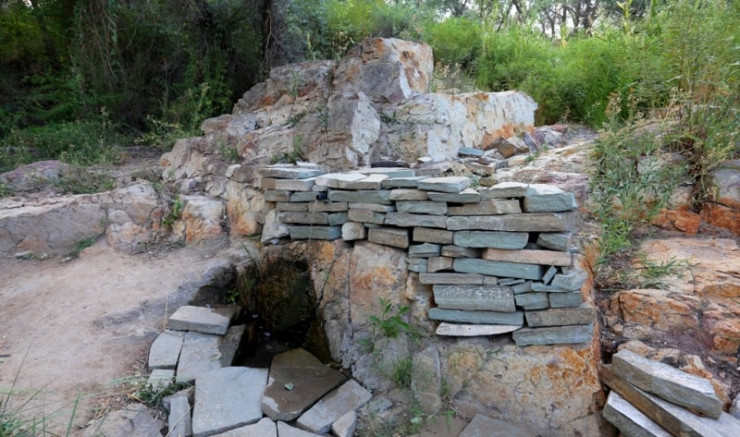 According to one of the legends, Genghis Khan once rested on the territory of the current reserve during a campaign with his army. To feed the army, a giant cauldron for food was installed on the stone blocks. These three stelae are almost two meters high and are called Oshaktas. According to another legend, Genghis Khan rested under an ancient tree, a willow that is more than 700 years old. It is located in one of the tracts of Kosbastau. Willow branches in the form of thick trunks rest on the ground. 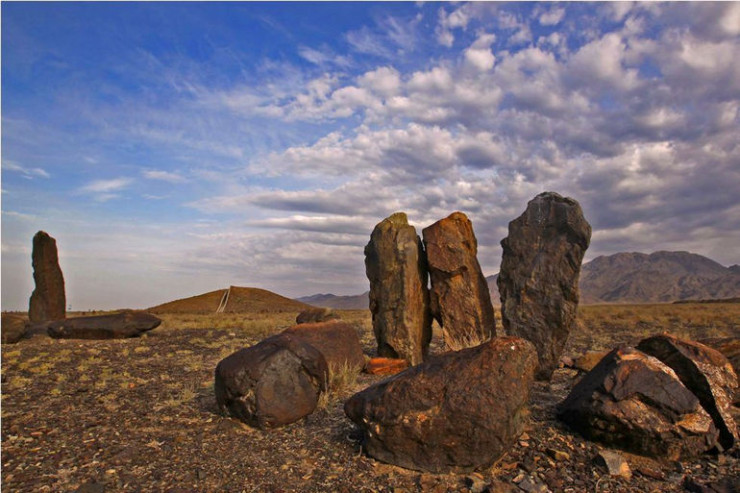 There are also Saka burial mounds “Besshatyr”. These burials date back to the VI-IV centuries BC. “Beshatyr” consists of more than 30 large, medium and small mounds. Around them is a chain of 45 stone fences, on which petroglyphs with animals are carved. 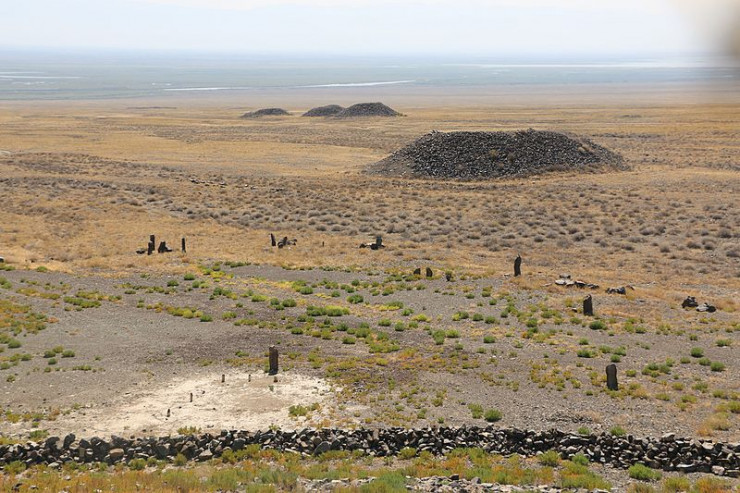 The Ak-Bulak waterfall is located in the Kyzylauyz gorge. Its height is 15 meters. In May, hawthorn trees bloom at the foot of the waterfall. In the summer, the waterfall runs dry.

The territory of the state National park “Altyn-Emel” is home to Przhevalsky’s horses from the Shymkent zoo. It is planned that their release into the wild will help restore the population of the endangered species. Przhevalsky’s horse is listed in the Red Book of the Russian Federation, the Red Book of the International Union for Conservation of Nature. In addition to Przhevalsky’s horses, the national park is protected by gazelles and kulans. As of 2018, there were 4,825 gazelles and 3,510 kulans, and according to the official website of the reserve, their number increases every year. In the national park “Altyn-Emel” there is an opportunity to see kulans and gazelles at a fairly close distance.

There are also two types of venomous snakes: the viper and the copperhead. The length of the body of the muzzle reaches 70 centimeters, and the length of the tail is 11 centimeters. The head is covered with large shields, similar to a shield, hence the name. The color of the copperhead is brown or gray-brown, with transverse dark brown spots. The snake bite is painful, accompanied by bleeding. The teeth on which the poison is located are located very deep in the mouth of the snake, so when biting an adult, it does not manage to use them. For children and animals, the bite of the Pallas’s copperhead is more dangerous. The muzzle is listed in the Red Book of Kazakhstan. 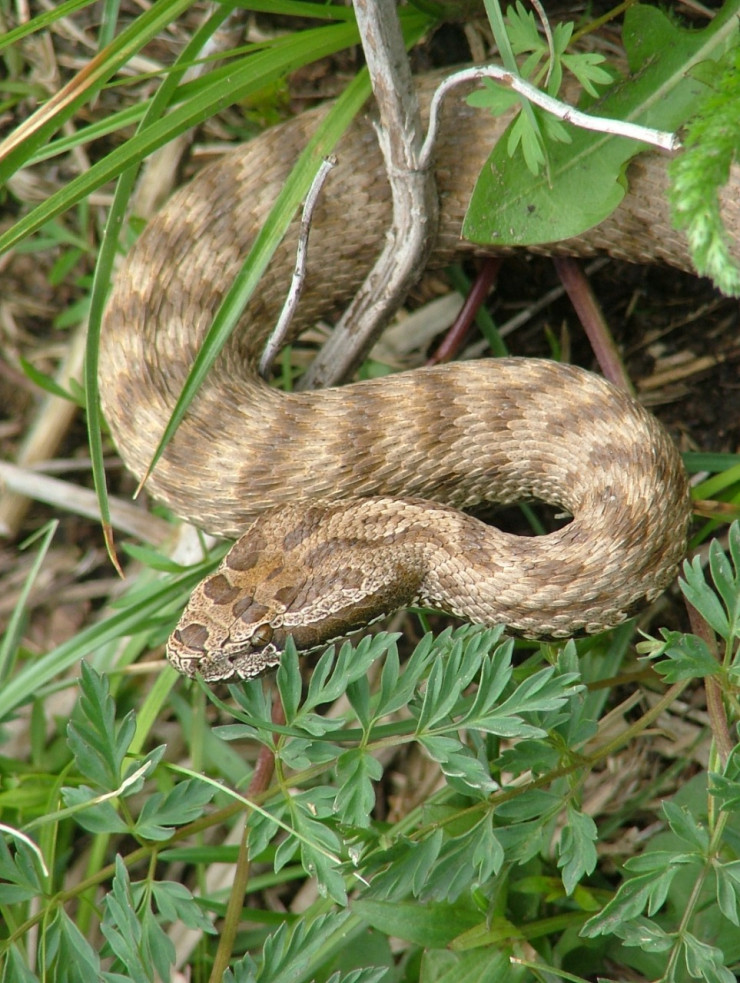 Also in the national park you can find the steppe agama-a lizard with an orange-yellow tail and a bright blue belly and throat. The rare bird of prey kurgannik also comes here. Its wingspan reaches up to 1.5 meters. The tumbler lives in North Africa and Central Asia. In the national park there is a rare plant called cistanche (zrazikha), which receives nutrients from the roots of saxaul.

Accompanied by guides, travelers can explore three driving and hiking routes. The first route starts from the village of Basshi and the stone steles of Oshaktas, includes a visit to the turang grove and the spring of Shokan Ualikhanov, the final point is the “singing dunes”. As part of the second route, you can view rock paintings and visit the Saka mounds “Beshatyr”. The third route starts from the village of Basshi, goes to Kosbastau to visit the 700-year-old willow and ends with the mountains of Katutau and Aktau.

The national park has six comfortable hotels for 50 people and four places for camping. At the Shygan cordon there is an ethnographic village of yurts, with a Saka bath and a swimming pool.