A place where 40 beauties were petrified in fear. What is interesting about Sairam-Ugam National Park

Sairam-Ugam State National Nature Park includes up to seven natural areas. Here grows up to one and a half thousand species of plants, there is a rich animal world. Special attention is drawn to the local rocks, which are distinguished by their unusual appearance. In this article, we will tell you about the legend with which people tried to explain their origin.

Sairam-Ugam State National Park is located in the north-eastern part of the western Tien Shan, which is represented by the Karzhantau, Ugam and Boraldaitau mountain ranges, as well as the north-western spurs of the Talas Alatau. There are many rivers in the park – Ugam, Kaskasu, Sairamsu, Burguluk, Kokbulak, Badam and Mashat. 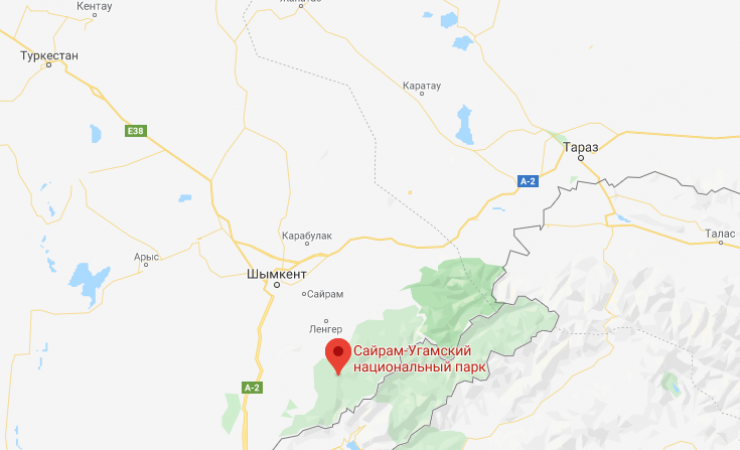 In natural areas, from the steppe to the high mountain, you can find more than one and a half thousand species of plants, 240 of which are red-book. Here you can see such rare plant species as Albert’s iris, Sogdian ash, Yanchevsky currant, grapes, wild representatives of apple, walnut, plum, pear, tulip and onion. 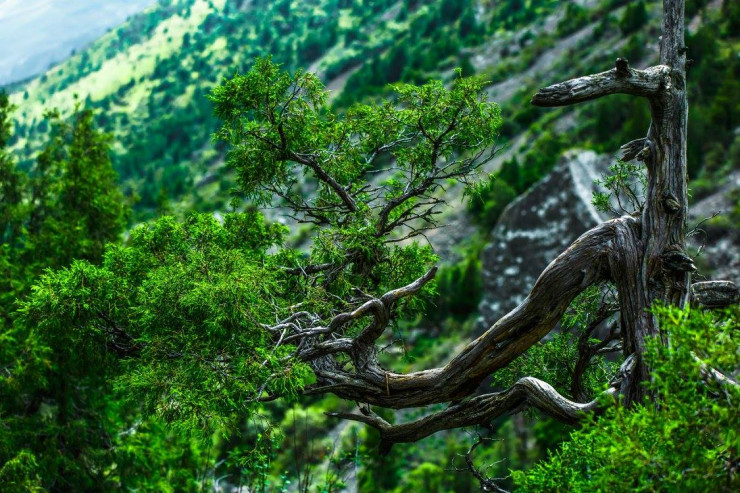 The park’s wildlife is also very diverse. Here you can meet whole families of porcupines, badgers, wild boars, bears, packs of wolves, which live quietly in the protected area, where hunters are not allowed to enter. Roe deer and mountain goats run through the mountains. In spring, the Karatau argali often appear on the southern slopes of the Boraldai range. If you are lucky, you can also see some of the most cautious animals on the planet – the Turkestan lynx and the graceful snow leopard.

Rock carvings, or petroglyphs, religious buildings, settlements and burials of different historical eras have been discovered on the territory of the park, all these cultural and historical monuments have not been studied enough and are waiting for archaeologists and scientists. This is because the Great Silk Road trail passed through the park, as a result of which historical monuments remained along the entire route of the caravan road. 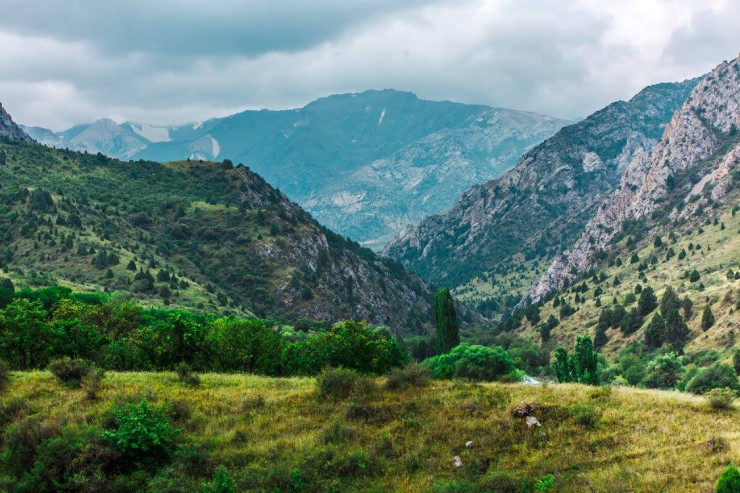 Here you can admire the view of snowy peaks, one of which – Sairam peak height of more than four thousand meters above sea level (4236 m), a mountain lake Makpal, which is situated at an altitude of 2,100 metres, cliffs of Kareckas, or Forty girls that remind beauties standing in a fairy circle. These are small pointed rocks, over which nature itself has worked.

Each rock stands apart and differs from one another. It is said that at one time there were exactly forty rocks. But now there are only about 20 left. Among them are both large and small, peculiar, fascinating with their bizarre shape.

The locals carefully preserve the old legend, which is passed down from generation to generation. 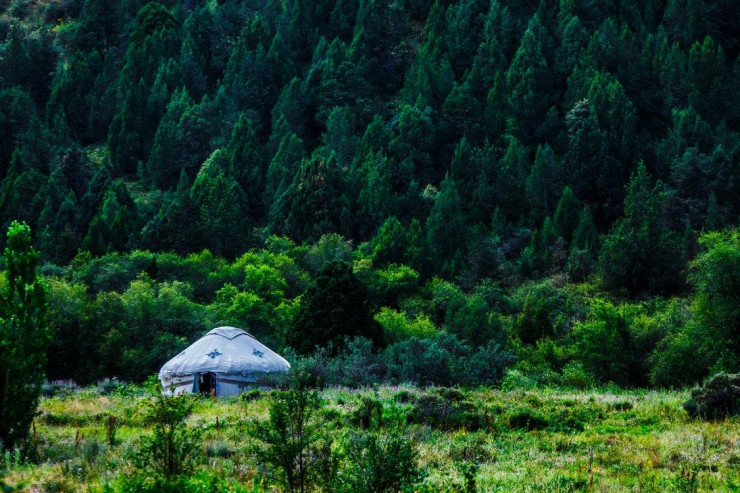 Once upon a time, these places were inhabited by people who did not know the cares. They were engaged in hunting and gathering, without worrying about money and wealth. The only thing they valued was their freedom.

But one night there came to them a cruel khan, a local ruler, who wanted to conquer and subdue this people, to take their pastures with lush grass and land protected from the cold northern winds by mighty mountains.

The khan’s soldiers killed the elderly and children, and he decided to take 40 beauties to his harem. When the khan and his army were leaving through the pass, an old mountaineer caught up with them on horseback. The soldiers wanted to seize the one who dared to disturb the khan, beat him with whips, but the old man began to turn to stone in front of the frightened and amazed enemies. Like the old man, the slave girls also turned to stone, the old man saved himself and the beauties from disgrace and the inevitable painful death. The khan himself disappeared, and his faithful dog froze in place, turned to stone. He was forever left to guard the place where he had last seen his master. 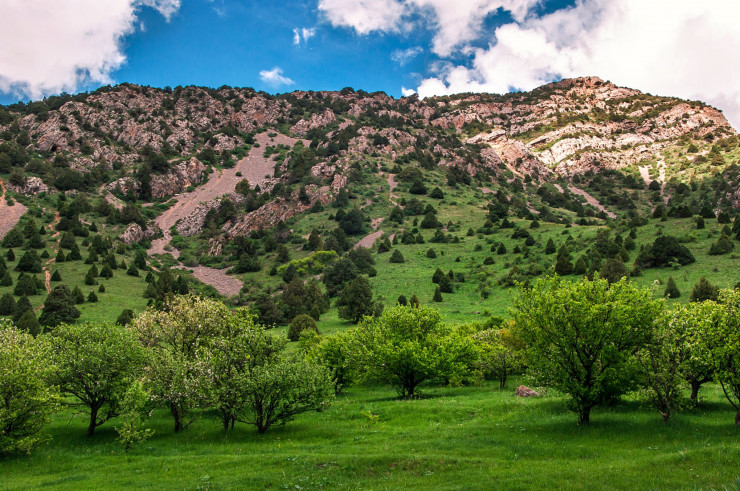 The soldiers, startled, broke their spears and ran, forgetting about the plundered wealth. They waved their arms in fear, and became black crows to a man. So still forty beauties and the old man, their savior, stand under the pass. A little to the side of them you can see a stone that looks like a dog. And when in the valley of rain, over Kareckas start circling carrion crows – warriors of the evil Khan.

It is these mountains that provide the population of Shymkent, as well as its surrounding areas, with high-quality drinking water. 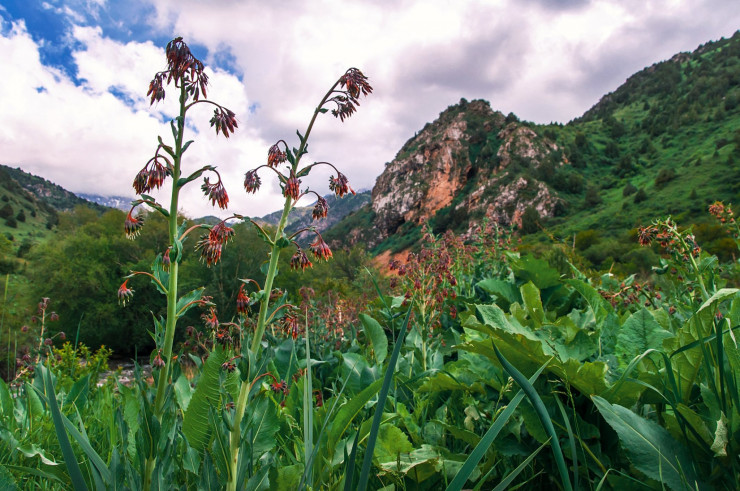 For tourists, a large number of different routes are offered for every taste and for people of different physical fitness. 11 tours were created that allow you to see the beauty of the park. Visitors were particularly appreciated by such routes as the tour to the canyons Nautsi and birgulyuk, in the valley of the river Sayramsu, and a sightseeing tour of the lake Busingen. Tours can be on foot or on horseback, depending on the length.

Lovers of nature and birds are offered a special tour “Bird Bazaar”, a seasonal hiking route with a length of seven kilometers. All routes of the park can be viewed here. 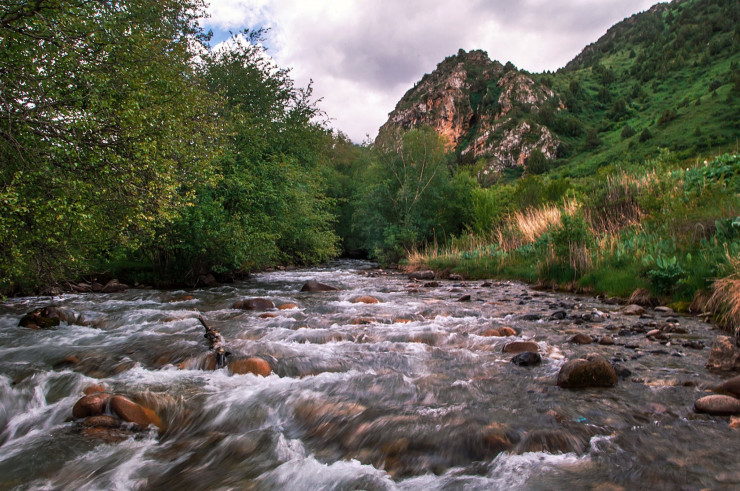 You can visit Sairam-Ugam State National Nature Park at any time of the year, and the transport network is well developed here. The distance to the nearest major city – Shymkent is only 70 kilometers. Friendly locals host tourists in guest houses, which allows you to plunge into the local national traditions, drink aromatic tea, taste local dishes and enjoy the silence of rural life. 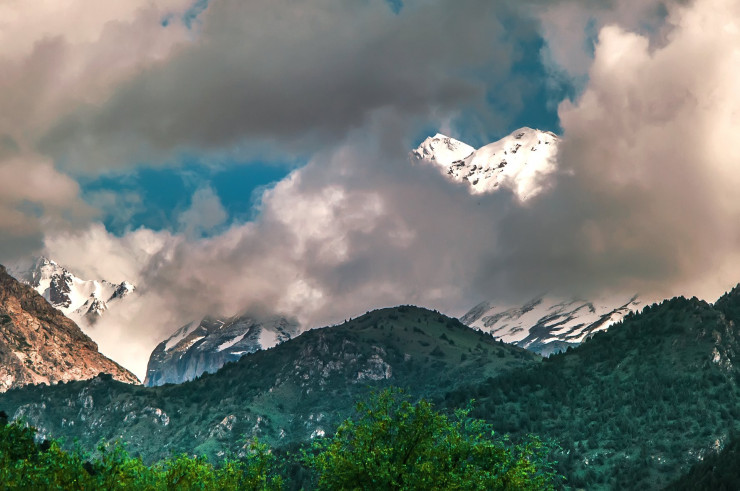 The park is located in the South Kazakhstan region, in the Tolebi district, in a mountainous area.

From Shymkent, you need to turn towards the city of Aksu to the city of Langer. There, opposite the building of the military enlistment office, there is a cafe “Aisulu”, where the Center for Ecotourism and Ecosystem Monitoring is located. Here you can answer questions about the park and help you choose a route.