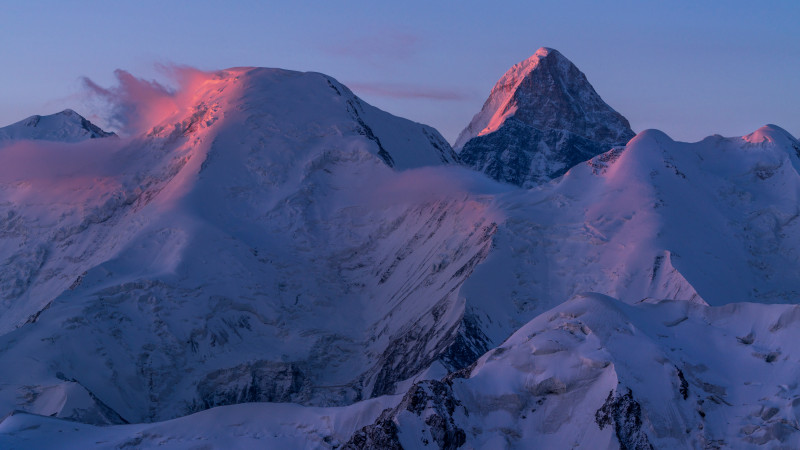 Lord of the sky: the story of conquering Khan Tengri peak

Khan Tengri is one of the most beautiful peaks not only in Central Asia, but also in the whole world. This peak has the shape of a sharp four-sided pyramid with a height of 7,010 meters, if you count the ice cap, and is located in the Central Tien Shan, as part of the Tengri-Tag range on the border of Kazakhstan, Kyrgyzstan and China. In this article, we will tell you about the history of mankind’s acquaintance with the peak, whose name means “Lord of the sky”in Turkic.

Burning above the surrounding mountains, the pointed peak of Khan Tengri peak is the first thing those who live in the foothills of the Tien Shan, or Heavenly mountains, see at dawn. Once this mountain system was the center of the area of residence of the ancient Turks. It is no wonder that the highest point of these mountains was considered among them the Supreme deity (along with the goddess Umai and the ruler of the lower world Erlik) and at the same time his place of residence. Among the tengrians, Tengri was the divine head of the upper world and performed many functions: he determined the fate of people, measured the life span, and was able to grant Supreme power in society. 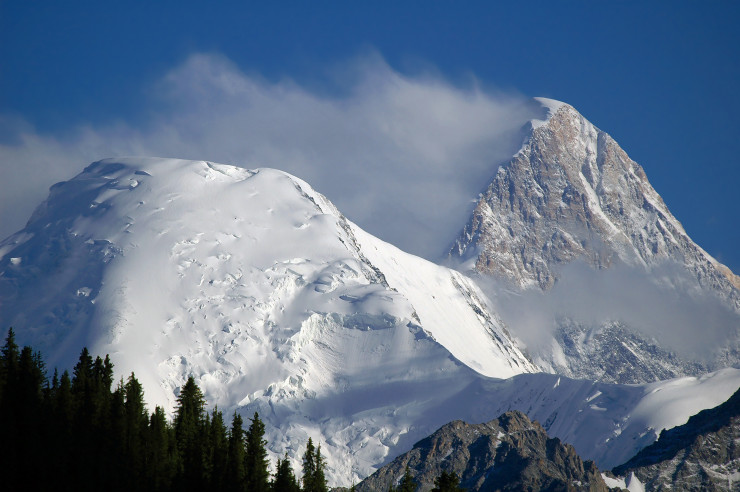 The ancient peoples had an idea of the Heavenly mountains, but without much detail, although the Chinese Chronicles 1200 years ago and the notes of missionaries from Byzantium of a later period indicate that this peak was known outside the Turkic lands. Geographical knowledge about the Tien Shan was inaccessible to the ancients – the slopes of Khan Tengri were too high and steep. The second half of the XIX century was the time when domestic and foreign scientific expeditions began to be sent to the Tien Shan. But training, equipment and technical disability still did not allow researchers to go deep into this powerful mountain range. 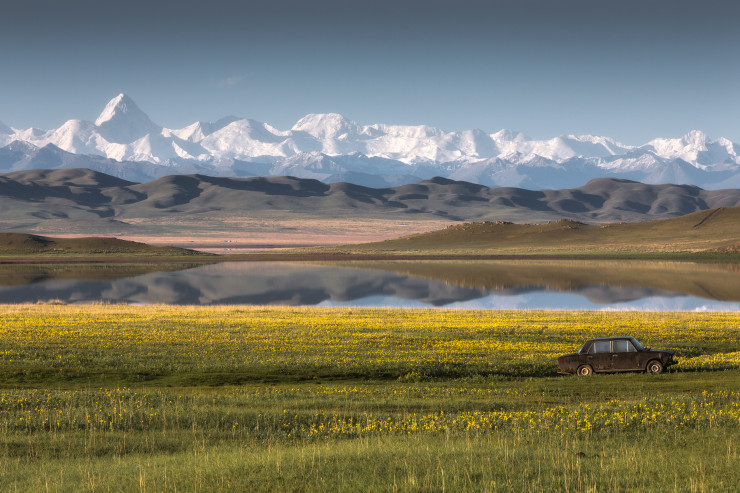 The first scientific data about Khan Tengri can only be called the materials of the great Russian geographer and traveler Pyotr Petrovich Semenov-Tyan-Shansky, who saw and described the peak during his trip to the Tian Shan in 1856-1857. Struck by the icy beauty of the peak in 1857 from the Eastern pass of the Terskey Ala-Too range, skirting lake Issyk-Kul from the South, the scientist decides that this peak is the highest point of the entire Tien Shan, the legendary Khan Tengri. At the same time, the guides claimed that the Kyrgyz call it Kan-Too, and the Kazakhs – Kan-Tau, which translates as “Blood mountain”, because of the reddish glow of the marble slopes at sunset. Semyonov (at that time he had not yet received the honorary second part of the surname in honor of the famous mountain range research) placed it in the center of the Tien Shan ridges node, moving the top on the map 20 kilometers to the North. 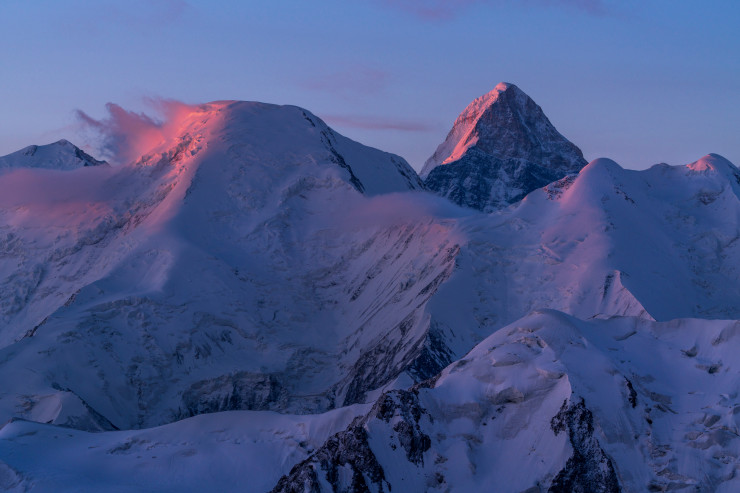 According to Pyotr Semyonov, Tien Shan made a strong impression on him: “When we reached the top of the mountain pass at about one o’clock in the afternoon, we were dazzled by an unexpected sight. Directly to the South of us rose the most magnificent mountain range I had ever seen. From top to bottom, it was made up of snow giants, of which I could count at least thirty to my right and left. The entire range, along with the gaps between the mountain peaks, was covered with a never-ending veil of eternal snow. In the middle of these giants was one, sharply between them stands out in its height, snow-white pointed pyramid, which seemed from the height of the pass exceeds the height of the other peaks twice… It was Khan Tengri.”

The mistake of Semenov-Tyan-Shansky not only widely spread the wrong name of this peak – the inaccuracy of the Russian geographer provoked many years of disputes about the passage of the border in this mountainous area. In particular, it was later used in detailing the border with China under the Kashgar Protocol of 1882. Later, after the discovery of Victory peak in 1943, realizing the error of Semenov-Tyan-Shansky, Soviet topographers moved the border on their maps to the main node, that is, Shater peak, and drew it along a short Meridian ridge connecting the Narynkol ridge with the Victory massif.

Almost half a century after Semenov-Tyan-Shansky, two expeditions of the outstanding German geographer and mountaineer Gottfried Merzbacher in 1902-03 and 1907-08 helped to make an accurate map of the Tengri-Tag range with the” highest ” point – Khan Tengri peak. In 1892, the scientist first came to Semirechye, looked into the eyes of the Lord of the sky and decided to conquer the legendary peak, and almost in the first place for the Professor was the sports goal of climbing to the top. At the same time, he collected faunal, floristic, and geological material for other scientists in his homeland. Merzbacher makes an attempt to approach the top of Khan Tengri, determining its height at 7200 meters, and even takes photos that later flew around the world. And most importantly, the German makes a map of the ridges, which later geographers and travelers used for a long time. Of course, there are some inaccuracies in his scheme, but in any case, Merzbacher is rightfully considered the one who first discovered the exact location of Khan Tengri. After his expeditions, Merzbacher wrote in his diary: “Khan Tengri is not a place for mountaineering.” 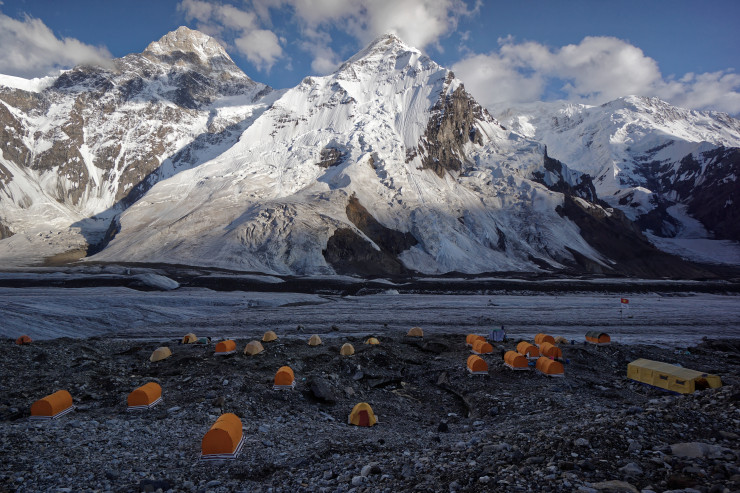 By the beginning of the great Patriotic war, Khan Tengri peak had already been conquered three times by groups of climbers from the USSR. So, the Ukrainian mountaineer M. p. pogrebetsky in 1931 also entered himself into modern history, having passed along the southern side of the pyramid. Even today, this route is considered a classic.

After that, in 1936, two teams at once: the Kazakh team, which included E. Kolokolnikova, I. Tyutyunikova and L. Kabardina, and the Russian team, which was led by famous mountaineers – the Abalakov brothers, conquered Khan Tengri.

In 1943, topographers from the expedition of P. Rapasov worked in the area of the peak, who processed the material collected “in the field” in 1944 and mapped the mark of 7439 meters. They gave the peak a new name-the peak of Military topographers, because they were sure that the peak had not yet been conquered by someone. Well, in 1946, the peak was renamed Victory peak. According to the ancient Chronicles, this is the great Khan Tengri.

The tragic story of conquering the peak of Victory includes numerous unsuccessful attempts and human sacrifices that E. Abalakov and his team had to endure. In 1956, he climbed to the top and took photos there that proved that the peak of the XX years of the Komsomol and the peak of Victory are one and the same point.

Kazakh mountaineer Anatoly Bukreev, the author of the CIS record (he conquered the Himalayan eight-thousand meters 21 times), made high-speed solo ascents to Victory peak on August 22 and Khan Tengri in the summer of 1990. The legendary “Snow leopard” claimed that Khan Tengri is probably the most beautiful peak in the world because of its correctly positioned edges and geometric pyramidal symmetry.

For another Kazakh climber Denis Urubko, who was the first in the CIS to conquer all 14 eight-thousand-meter mountains in the world, Khan Tengri became a home,” training ” seven-thousand-meter mountain before the Himalayan ascents, which he conquered more than ten times. Urubko became the author of the record for the high-speed race on Khan Tengri: from the base camp to the top in 7 hours and 40 minutes. This record was set in 2000 and has not been broken yet.

A unique traverse was made at this peak under the leadership of Valery Hrishchaty in the summer of 1990. Note that future participants of the Victory peak – Khan Tengri peak traverse even spent the night on the top in order to acclimatize, such cases are quite rare on serious peaks. But the aforementioned Denis Urubko did it alone-on August 1, 2011, the climber spent the planned night at the top of Khan Tengri peak.

Kazbek Valiev, the first Kazakh to conquer mount Everest, climbed Khan Tengri peak in 1986, using the southern wall and marble edge. At that time, the height of the peak was still 6995 meters, without a snow cap. This ascent was one of 21 on all seven thousand meters of the USSR, made by a climber from 1974 to 1990. 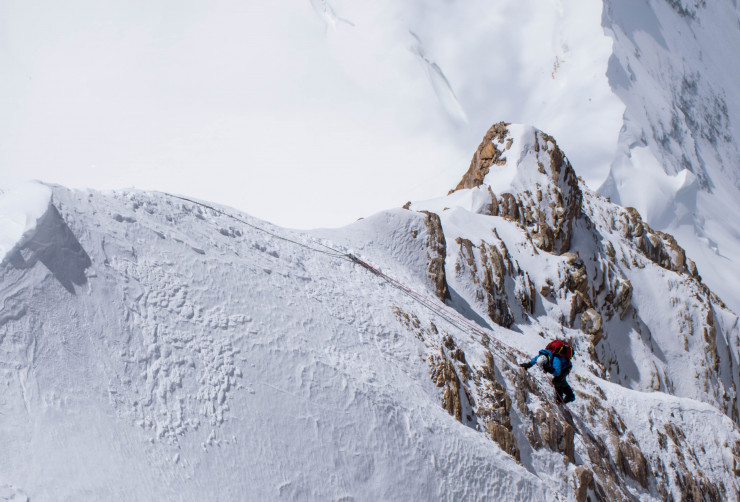 The conquest of Khan Tengri peak is the dream and life goal of many climbers around the world.there are more than a dozen routes that take at least 14 days to climb. Under the peak is the international mountaineering camp (MAL) “Khan Tengri”, created by Kazbek Valiev himself and hosting up to 2000 climbers and mountain tourists per season. Under the patronage of the regional authorities and the CSKA mountaineering club, international sports festivals are held on the basis of MAL every year.