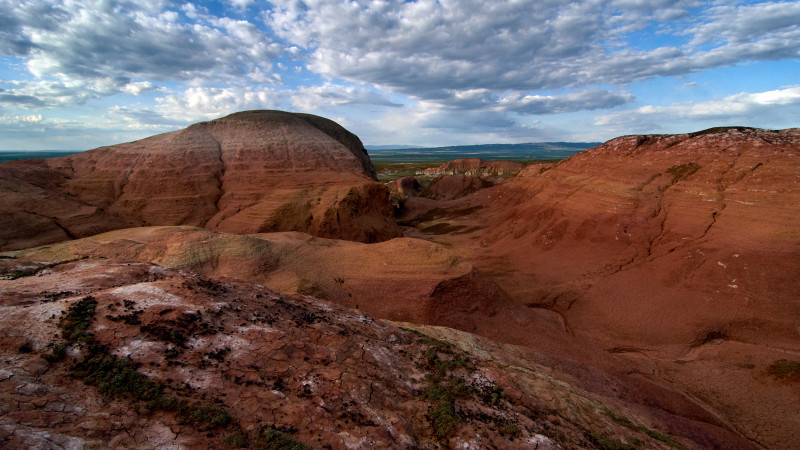 “Land of dinosaurs from Mars”. Facts and legends about the valley of the Kiin-Kerish

In the East Kazakhstan region, there is a unique valley with landscapes that evoke thoughts of space travel. The intricate red, white and yellow clay “structures” created by nature resemble the planet Mars. In this article, we will tell You about a unique natural monument, comparable in size to 300 football fields: 300 hectares of “alien” land in the middle of the vast Kazakh steppes.

The name “Kiin-Kerish” is translated in various sources as “Proud beauty”or” Proud beauty”. The local hills and cliffs are made up of multicolored clays, mostly red, white and yellow. From a distance, the bright rocks look like fiery flames, so they are called “flaming”. The valley is located in the Kurchum district. Until recently, local attractions were little studied by tourists, but in recent years they have increasingly attracted the attention of both Kazakh and foreign travelers.

One of the most amazing and rare sights opens when it rains in the valley and the whole earth is transformed by colorful drawings of clay streams. The Kiin Kerish terracotta canyon on the Northern shore of lake Zaisan is a rare paleontological monument. Geologists believe that the valley was formed in the hot and humid tropical climate of the Mesozoic, when the earth was dominated by dinosaurs.

Earthquakes lifted its waters into the air. Secrets of ancient Zaisan

Kiin-Kerish is also called Aeolian (meaning “created with the help of the wind”, the word comes from the name of the Greek wind God Aeolus)”city of spirits”. There are many different legends about this place. Clay “towers”, “castles” and “domes” created by nature, just by their appearance, convince of the truth of the myth, according to which every night these rocks turn into buildings of an ancient city. 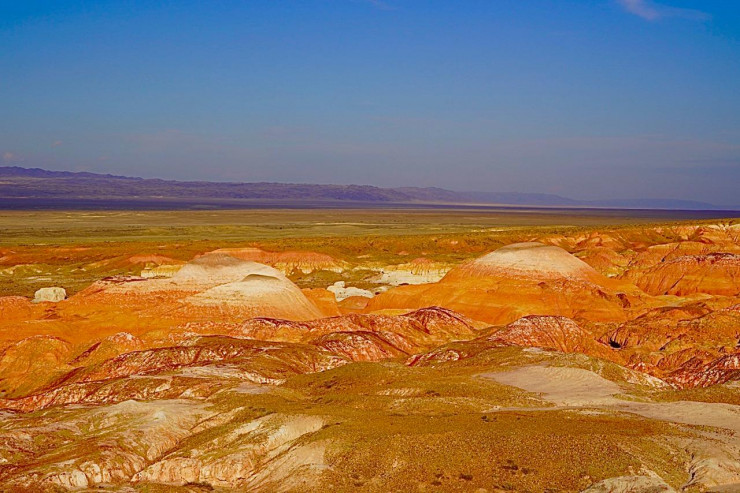 In the e-book “Legends and tales of East Kazakhstan” there is a story about hunters who came to the valley in search of treasure. When they settled down for the night, they saw the glow of precious stones in the moonlight and feverishly began to collect treasures and fight with each other. At dawn, the hunters realized that they were just pieces of colored clay. People burst into tears when they realized what a lesson nature itself had taught them: only the treasures of the soul do not disappear.

Also, according to one of the legends, in ancient times people considered this valley the entrance to the underworld. They believed that here the fire of hell broke out of the earth, and its flames soared up and turned to stone.

Almost everyone who has visited the Kiin-Kerish valley tells about the powerful energy of this place, where time goes differently, you can feel the breath of past eras and the support of your ancestors, and real magic happens. Writers and poets, inspired by these alien landscapes, created beautiful creative works. So, the local poet Alexander Isachenko wrote this poem:

“In the sunset cloud of a dune,
In the mountains, near lake Zaisan,
Kiin-Kerish-dry wound,
What do you want to tell us?
The earth, suffering, was exposed,
Gone into the sand, millions of years:
the Desert opened up with clays,
Kiin-Kerish-a sad trail.
Autumn day, the eagles fly,
The smell of sagebrush, grace.
Icebergs don’t melt from clay.
Time flows, not to catch up.
Kovyl sings a Surah of the Koran,
A snake slithers in a dry stream
Into the blood-red mounds.
It’s like Mars, not Earth.”

More than a hundred years ago, Russian geologist and writer Vladimir Obruchev repeatedly visited these parts, after which he came up with the idea of writing the book “Plutonia”.

This book, along with” Journey to the center of the Earth ” by Jules Verne, was read by almost every Soviet teenager. In the story, a polar expedition of Soviet scientists finds a prehistoric world in the bowels of the Earth. Travelers find themselves in the Jurassic period and encounter its extraordinary inhabitants: monstrous lizards, dinosaurs, pterodactyls and giant ants. In honor of the Roman God of the underworld, they call this land Plutonia. 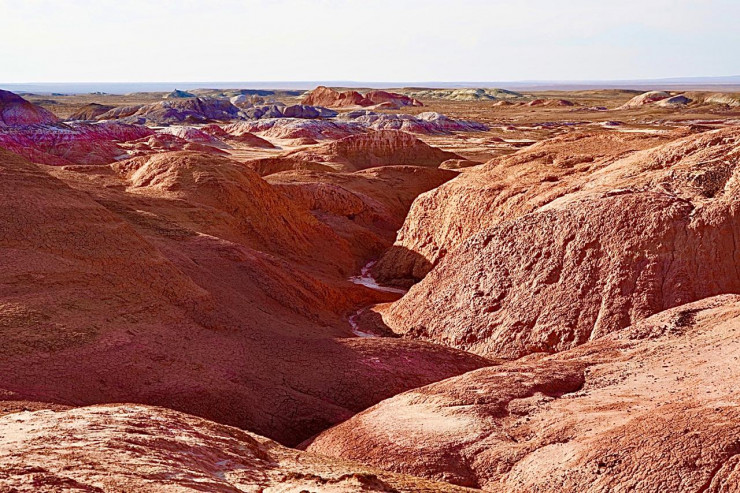 Once in Kiin Kerish, you can believe that such stories could really have originated here. It seems that the antediluvian lizards still look at people from these cliffs. And this is not an empty fantasy. According to Kazakh geologist Viktor Filippov, the Kiin-kerisha section proves the existence of ancient vertebrates on this territory: rhinos, crocodiles, turtles, salamanders and other inhabitants of subtropical forests. Were found the imprints of plants of subtropical flora. These are palm trees, plane trees, laurels, magnolias, lotuses. The disappearance of dinosaurs and subtropical plants may have been due to the dramatic climate change that the Kiin-Kerish deposits captured. Geologists estimate the age of the tract at 15-30 million years.

Scientists ‘ attention is also drawn to living representatives of flora and fauna. The Kiin-Kerish tract is home to rare and endangered species of animals and plants.

The flora is represented by two rare plant species: the grey atraphaxis and Ferula Krylov. Also in the valley you can find various-leaved poplar, salt marsh, Tulip, elm and an extremely rare species listed in the Red book-Zaisan Mordovian. It also grows iris, which is widely used not only in perfumery and cosmetology, but also in medicine. So, iris is used for a variety of diseases of the liver,gastrointestinal tract and throat, which is important during the flu and SARS. The bitterness and essential oils contained in the iris rhizome are also a powerful antiseptic. 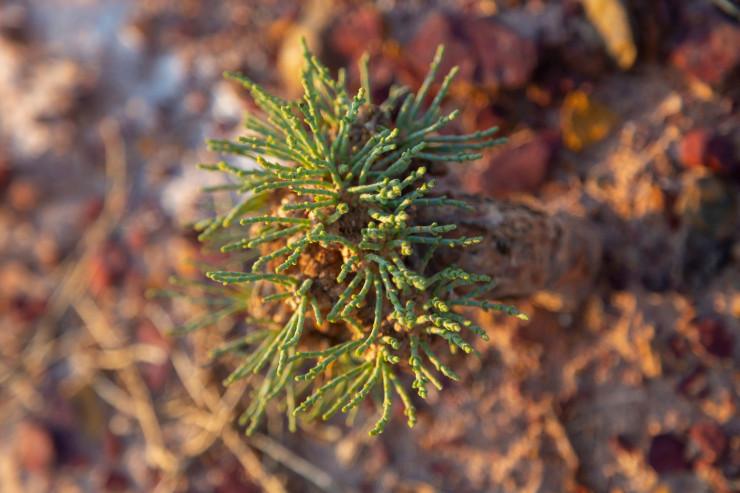 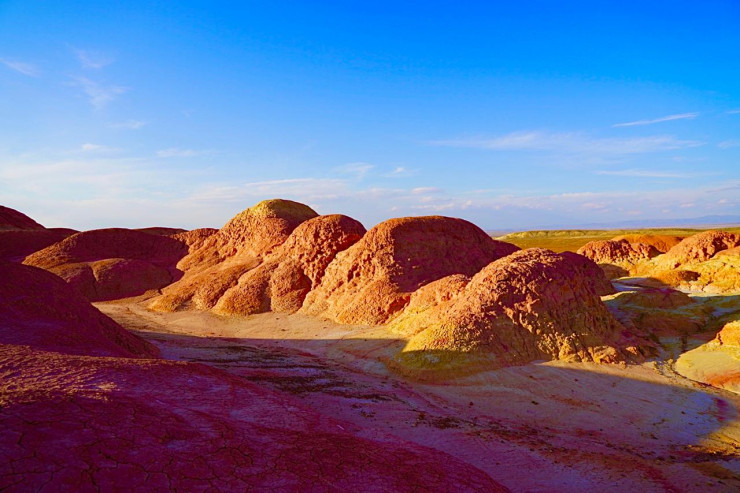 In addition, these inhospitable and barren lands are home to rare and endemic mammals and reptiles: dwarf jerboa of salpingotus the size of a walnut, yellow Flycatcher, extinct everywhere except in Zaysan depression, the Zaysan toad-headed Agama, striped snake, mottled lizards.

it is quite difficult to Find the Kiin Kerish valley without a guide, since there are no signs, and it is located in a lowland, in a kind of funnel, as if in the crater of a volcano,which makes it difficult to see it from the highway. Therefore, when going on a trip, it is recommended to take local guides with you, and it is better to do this in dry weather, because rain and clay are bad companions even for off-road vehicles. 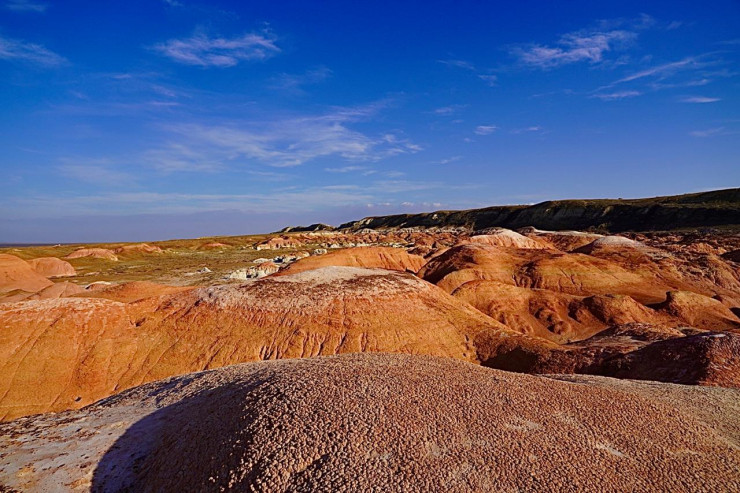 When leaving Ust-Kamenogorsk, follow the Samara highway to Kaznakovskaya ferry. By the way, the first ferry leaves at six in the morning. After Kaznakovskaya ferry, head to the small town of Kurchum (120 kilometers from Kiin-Kerish). Here you should stock up on several cans of gasoline and drinking water, as there will be no further gas stations.

The road to the canyon is broken asphalt plus a primer. After the City will begin a new report kilometer-long columns. Go to the column 79th kilometer and there you will see a right turn on a dirt road and an arrow with the inscription “Auyly Amanat 28”. Turn off and drive five kilometers. Then you will see a left turn, this is the beginning of the road to Kiin Kerish.

Due to strong winds, it is not recommended to stay here overnight. Especially if it starts to rain. There is a high probability that the roads will be washed away and the tents may be carried away. A few hours for a walk is enough to get around Kiin Kerish up and down.

You can set up a tent camp on the shore of lake Zaisan, which is located near the tract. And 50 kilometers from Kiin Kerish there is mount Shekelmes-a kind of analogue of the Martian valley. Here there are caves and the whole maze of clay. You can also see flocks of pelicans and cormorants resting on the sandy beaches. 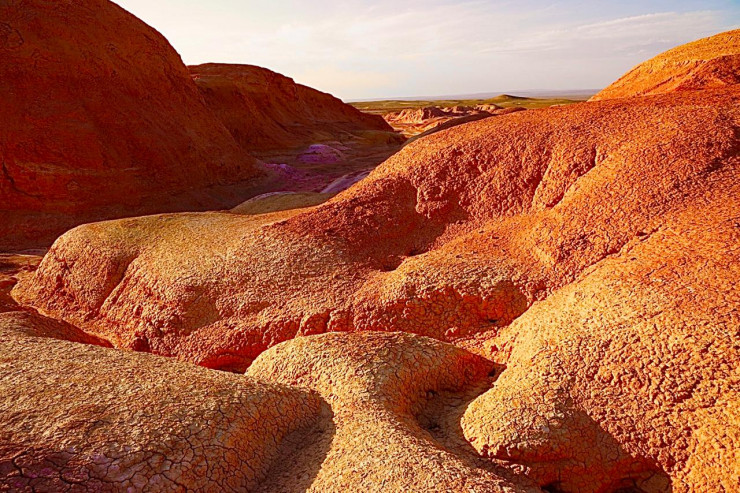 along with this, you can visit the “city of spirits” as part of small groups organized by local travel agencies. The average price of the tour is from 20 to 50 thousand tenge. The price depends on the duration of the tour and the attractions visited. Also, enthusiasts search for each other on social networks and go on a journey with several columns of cars. 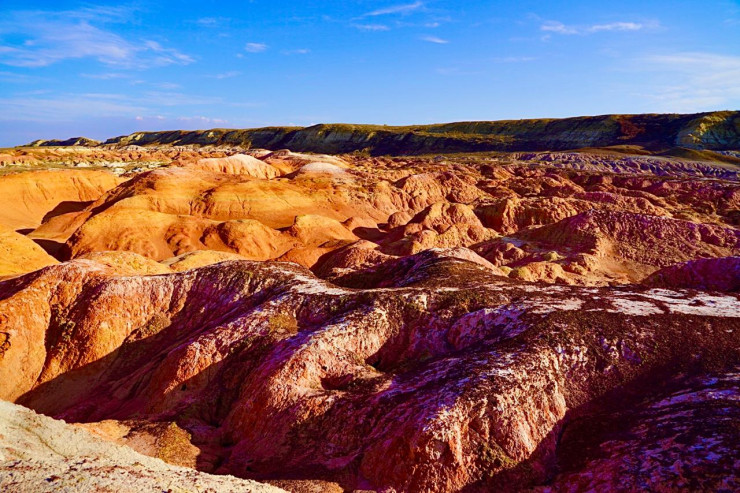 But if you can’t visit Kiin Kerish, a virtual 3D tour consisting of nine virtual spherical panoramas was created for such cases.

When going on a trip, you need to take a few things with you: insect repellent, sunglasses, a hat and a lot of drinking water.