National Kazakh cuisine is a diet developed by a centuries-old tradition. A well-thought-out list of dishes typical for the daily table of a nomad not only has a beneficial effect on the body, but also embodies the hospitality and table cordiality inherent in Kazakhs. In this article, we will introduce you to the peculiarities of national cuisine.

When sitting down to a table with Kazakhs, it is important to remember that every dish on it is the result of an ancient experience that helped nomads adapt to the difficult life in the steppe, with its harsh frosty winters and Sunny, sometimes unbearably hot and dry summers. The ability to understand what is useful to eat in a particular season saved a whole nation, which created from a small assortment of available products dishes that preserve the entire set of useful properties and vitamins as much as possible, and all this with an original, sometimes unlike anything else, taste of milk, meat, dough. Surprisingly, this set of conditions formed a rich, if not too diverse, but at the same time very useful and balanced cuisine.
Many dishes of Kazakh cuisine are usually prepared or served at a certain moment – most often during the reception of guests. Thanks to this feature, any meal in a Kazakh family has become a kind of ritual, especially if relatives from other villages gathered for the dastarkhan.

Hospitality – the business card of the nation

The great Kazakh steppe dictates its own rules: if a guest enters a house or Yurt, it means that there should be abundance and variety at the table. “As you meet, I know by your look; as you respect, I know by your Cup,” says an ancient proverb. Even if the host family was not rich, the best meat, sweets and drinks were always obtained from the bins to cover a decent dastarkhan, emphasizing respect for the guest and the desire for many hours of fruitful communication and exchange of news. The quality of the dishes served to the guest, as well as his further health, has always been given special importance. The most honored guests were served a rather specific dish bas Tartu-a boiled RAM’s head, which should be cut up and divided among the other participants of the feast. Most often, this honorary function was performed by the aksakal, a wise old man who blessed the meal by tasting the tender meat of the parietal part. Then the head of the feast treated the rest of the guests, observing a certain order, in which a special meaning was hidden.

Important for Kazakh cuisine is the ceremony of serving dishes, which has a certain order, from simple to more complex in preparation, which is also dictated by a favorable perception and proper assimilation of food by the body.

Meat is the head of everything

Speaking about Kazakh cuisine, we first mention meat: during the formation of the Kazakh nation, meat dishes played an important role. Nomadic cattle breeding provided the base, which is 80 percent of the diet, while agriculture was mainly used in the southern regions of the country. Kazakhs are used to cooking and eating horse meat or mutton, much less often – beef (since cows are less tolerant of nomadism and can not tebenevat – get food under snow and ice). Poultry meat was also rarely found in the diet of Kazakhs. The main ingredient was horse meat-meat with high nutritional and biological value, excellent digestibility and low fat content.

It was important for Kazakh cooking to be sufficiently “mobile” so that food would not be lost, it could be taken with you on the road without worrying about its condition. This is why semi-finished products made from dried, dried, smoked, and salted meat have become so popular. There is an opinion that an abundance of meat products is harmful, but if you consume them in moderation, they perfectly fill the body’s need for protein, fats, vitamins, macro – and microelements.

So what do Kazakhs cook from meat?

The most popular meat dishes in Kazakh cuisine:
Kuyrdak-fat, flavorful and juicy roast, which is prepared immediately after the slaughter of the animal from fresh meat, offal and fat.
Sur et-dried, sometimes smoked on birch bark meat, a popular cold appetizer.
Kazy-homemade sausage, which is prepared by filling a well-washed gut with especially tender and delicious horse meat from the ribs of a horse. This is necessary for the presence in the taste of sausage sweet, melting fat in the mouth, its special juiciness. Shuzhyk – another type of homemade sausage made from horse meat, less often from beef.
Meat in Kazakh (besbarmak) is the most famous and favorite dish far beyond the borders of Kazakhstan. Besh, as it is called in Kazakhstan , is the perfect balance between soft, well-cooked meat, sometimes several varieties, wide layers of homemade noodles and fragrant rich broth with onions and spices. 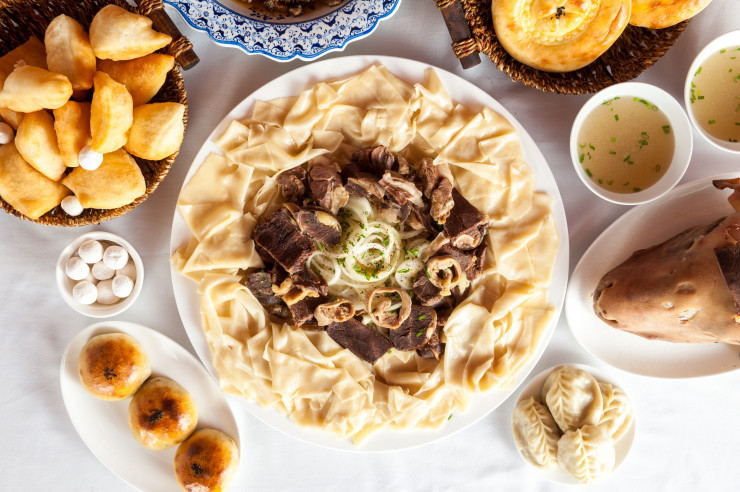 The range of meat dishes in Kazakh cuisine is much wider, many of them have a sacred meaning. For example, in ancient times, before a long separation from a loved one, a zhilik was prepared – a tibia with meat stored in a deep dish with flour – as a sign that the house would be waiting for his speedy return. When the guest returned, a festive meal was prepared from it. Baked with sheep’s tail fat and spices heart of the young horse, seasoned in flour, Kazakhs were preparing another unusual dish of opensec. It was sent by the parents of their married daughter as a sign of love and care, even at a distance.

There are many examples of such symbolic dishes in Kazakh cuisine, but the recipes of many of them have been erased from people’s memory along with the nomadic way of life.

Fermented milk products are the basis and pillar of Kazakh cuisine. Eating them before, after, or during a meal helps the digestive system digest the rest of the heavy traditional food. Lactic acids and micro-organisms that provide fermentation really speed up the fermentation process.
Assortment of milk pushed Kazakhs to make a variety of types of products: ayran from cow, camel shubat, kymyz from Mare, Kurt (dried cheese balls), risk, Ala (soft white cheese with added fat may especially oil), Aty (very tasty and creamy dish prepared from boiled milk and starter), ssbe (bitter-sour curd used to increase appetite and give a zest to drinks), but different variations of butter, sour cream and cottage cheese (may, clotted cream and risk) help the rapid recovery of strength and recovery, at the same time being a delicious treat.

Historically, Kazakhs do not suffer from overweight – this is not facilitated by open-air life, work and balanced food. The nomadic people have never been harmed by the great abundance of traditional pastries, another important element of the national cuisine. All this baking is very high in calories, quickly digested, because today it is not worth abusing. But in the ancient steppe, baking with the addition of milk, yeast, sour cream, butter, eggs, nuts and fats was a satisfying help in work and battle. It is still served with tea, sorpa (meat broth), and many meat dishes. The variety of Kazakh flour products is amazing: Taba-Nan (wheat bread), bauyrsak (round dough balls fried in oil), shelpek (tortillas), kuimak (fluffy pancakes), kazanzhappay (bread baked in a cauldron) and much more.

In summary, we note that the national Kazakh cuisine is good for human health. Hundreds of years ago, simple nomads, based on their lifestyle, came up with an ideal, plentiful diet of just three main ingredients. Dishes of Kazakh cuisine provide the body with all the necessary trace elements, help with many diseases, make children strong and hardy, and adults – hardy and efficient.

Kazakh cuisine is the quintessence of steppe flavor, ancient recipes and amazing ways of cooking which amaze the imagination of foreign tourists, while occupying the minds of the local population.