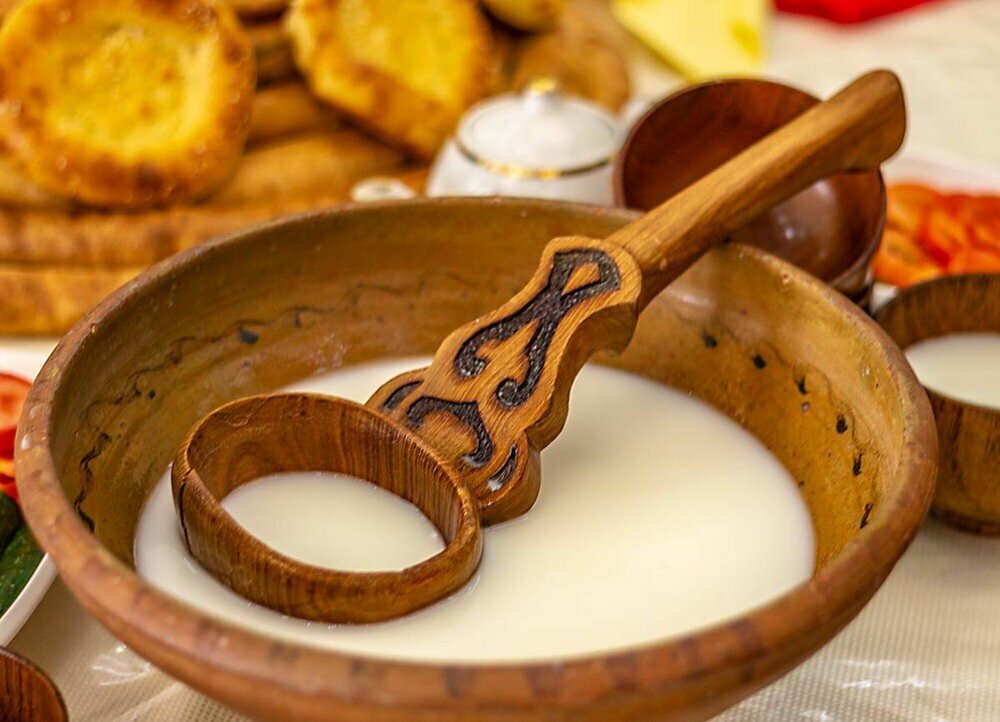 Drinks of nomads: how to quench thirst in the steppe

Unique Kazakh drinks that every traveler should try

These days, modern dietarians claim that dairy and fermented milk products are not healthy for the body, and in general, it is not necessary to use them, especially for an adult. But the wise nomadic ancestors of the Kazakh people, had an absolutely different opinion. The best way of satisfying your thirst under the blinding hot sun was to take a sip of fermented milk drink, which would have helped not only to cope with the dryness in your throat and dehydration, but also to appease hunger, revitalizing the body with protein, vitamins and other nutrients, which would have been very essential during the long journeys of that time.

Why was it never about water?

Cattle were the main source of food for Nomads, meat and dairy products made up 80% of their total food consumption. They tried to eat absolutely everything that would be edible – meat, fat, entrails, and of course, milk; in order to somehow make the dishes more interesting considering such a lack of varieties in ingredients available to them. The differences in fat content of all the different sorts of milk available from different animals was a big advantage, which allowed them to have a wide range of beverages and other products to be made from, such as cheese, butter, cottage cheese. Horse milk with only 2% fat can be called dietary, which is perfect for making light and refreshing drinks. Camel and cow’s milk is about 4-6%, and goat’s milk 4% and sheep’s milk 7% are considered to be the most beneficial for health and immunity. By the way, the fattiest and the most tender and delicious cheeses are still prepared from sheep’s milk.

The most interesting is that the Nomads almost never drank milk in raw condition, and there are reasonable explanations for that:

And having noted all three aspects, the Nomads coped with this problem brilliantly as they came up with a list of fermented milk drinks that could be stored for a very long time. As well as having an interesting and refreshing taste, they would go quite well with the hearty national dishes, and, most importantly, they would have a very positive effect on the body. For example, if there is a lesion on your face, the skin becomes dry and unpleasant to touch, so a nourishing mask from Shubat, a drink made from Camel’s milk, is applied on the face. Heavy and overweight people drink ayran, which normalizes the metabolic processes of the body and helps to reduce the weight. The Kazakh beauties, known since ancient times, famous for their ability to look young even at old age, uses liquid kurt drinks, containing an impressive list of useful microelements. Of course, the Kazakhs did not refuse to drink normal water, as it might seem to you by now; but they always preferred fermented milk drinks over anything else. So what do Nomads drink?

As we have already said, a wide list of different types of milks to choose from helps in making an extensive range of products from it. Based on their own observations and centuries of experience, nomadic tribes had formed some of the most well balanced recipes of fermented milk products, which are still popular not only in our country, but also beyond its borders.

Kumis (also spelled as koumiss or kumys), a drink made of horse milk, is a symbol of wealth and generosity, and a list topper of Kazakh national drinks, containing a wealth of vitamins and beneficial micro-organisms. It is not so easy to prepare, as you need experience and developed technology. But the principle is quite clear and simple: fermented with lactic acid bacteria horse milk is intensively shaken, then blended in a special spindle-shaped container for a long time and left to infuse in a dark place. Due to its amazing mixture and useful qualities gained after it’s been put through such processes, kumis helps not only to quench your thirst, but also has significant therapeutic properties:

On top of all this, two wonderful warm traditions are associated with the use of kumis among the nomads. In the beginning and in the end of milking season, it is usual to invite friends and relatives to share the “first” and “last” kumis, along with kind words and blessings. It should also be mentioned that there are at least 40 varieties of this wonderful drink, which are characterized by methods of preparation, maturating period and quality (fat content) of milk. By the way, Taraz, a city in the South of Kazakhstan, now produces elite kumis, which is exported to the countries of the European Union, Poland and Bulgaria. Shubat is quite a specific drink and you need to taste it in order to get a sense of its fullness and richness. It is prepared from camel’s milk with a simple process; right after the yield of milk, a prepared starter is added and left to sour in a dark place in a special dish (in ancient times, leather wineskins were used, later vessels made of wood or ceramics became popular). After a few days, the sour milk is taken out and gently stirred for quite a long time, so shubat takes its characteristic, thick and homogeneous consistency. After this procedure, the drink is ready to be consumed and is believed to have an impressive set of health properties:

Nowadays, this delicious fermented milk drink can be found on the shelves of almost any store in Kazakhstan. It has a very thick consistency, has slight hints of cream and does not have any specific smell, making it delicious. Real Kazakh katyk is prepared in two stages: baked milk is mixed with ferments and put into a warm place for 6-8 hours to start the fermentation process. The next day, the katyk obtained from the first fermentation is added to a new portion of milk and again left in a warm storage place for maturing. And now, a day after, you will get the rich taste of real traditional katyk. It is especially popular among the elderly, as it fights against many age-related diseases.

It normalizes the beneficial intestinal micro flora and effectively controls progression of pathogenic and putrefying bacteria. This drink is very popular amongst all Turkic people, and not only amongst the Nomads of Kazakhstan. The process of preparation is quite simple, but its benefits are incredibly great. It was even considered to be the main food during long horse riding. When all other products were used up, thick and tasty ayran saved brave wanderers from hunger and thirst. It is prepared from almost all types of milk which is put through a boiling process, and then a special fermentation starter is added to the already cooled but still warm milk. After a strong shake, the drink is sent “to rest” for 2-3 hours during which it steeps, gets a density and a specific taste. Many nutritionists claim that the health properties of ayran are very extensive:

But this drink has one small feature: ayran cannot be stored for more than one day, because otherwise all its health properties evaporate.

Besides of all these abovementioned drinks, Shalap and Koiyrtpak (simplified versions of some drinks) are widely spread among people. Shalap is ayran, kumys or shubat mixed with water in a ratio of 1:1. Sometimes it contains salt and herbs, but then it is considered to be a refreshing vitamin soup, which is ideal for quenching thirst and relieving from hunger in the summer heat. Koiyrtpak is almost the same thing, but instead of water, it is mixed with milk. This drink is for those who don’t like the sour taste of shubat or ayran. Milk neutralizes excess acid, and keeps only pleasant refreshing taste with hints of creaminess.

Information taken from the site kazakhstan.travel.