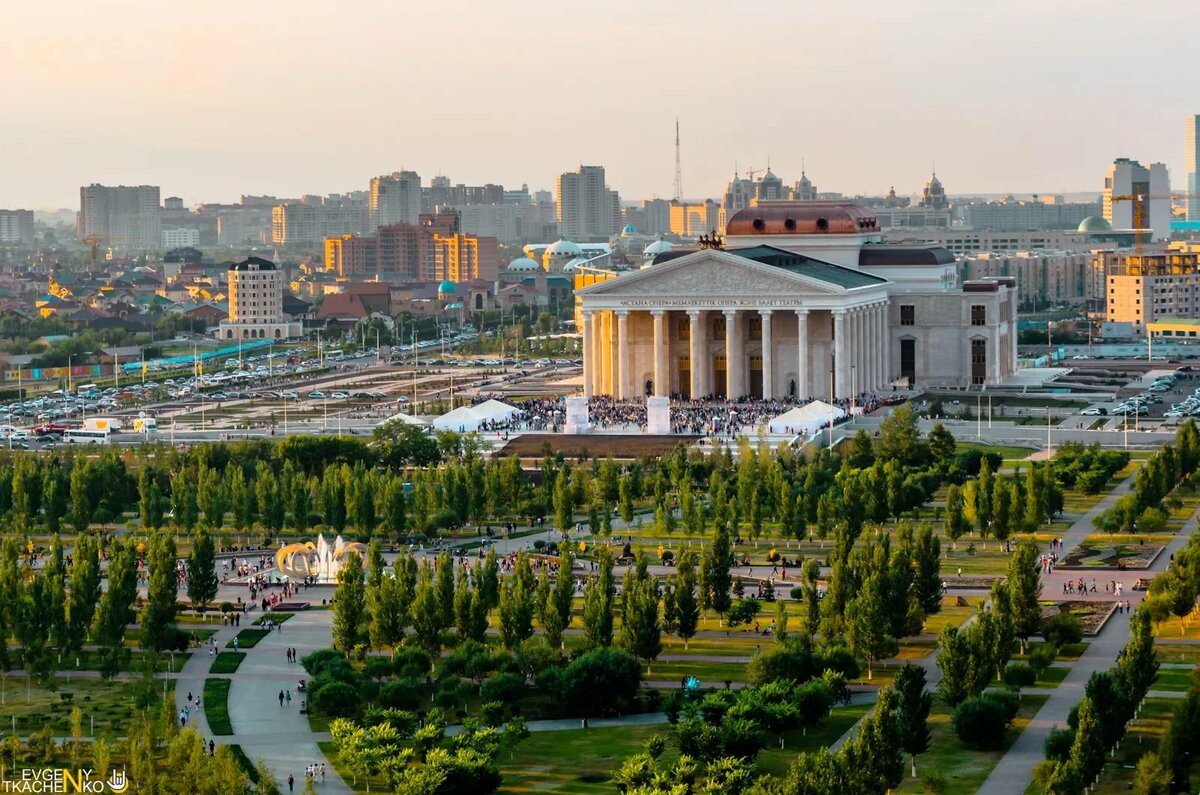 People who lived and were born in Nur-Sultan (Astana)

Historical figures, famous people and many others who are directly connected with the Kazakh capital.

Astana is rich in great and famous people who are known not only in Kazakhstan, but also in Russia and abroad. Each of them made a significant contribution to the development of the country and had a huge impact on the spiritual life of their countrymen.

Most of these people had innate leadership skills and the ability to achieve an honest victory. Together and separately, they left a mark on the history and became the pride of our young capital.

That is why the 20th anniversary of Astana Ruh.kz will tell you about the stars of Kazakhstan and beyond, who were born and lived on the territory of modern Astana and Akmola region.

Kenesary Khan has been striving for independence of Kazakhstan all his life. His struggle against the Imperial policy for the free Kazakh people and acceptance of their honor and dignity are called the greatest merits. Kenesary Kasymov was a leader and patriot of his homeland, so in the difficult hours of trials for his people, he showed his qualities as a great statesman, an outstanding commander and a brilliant diplomat of his era – a man who gave his entire life to the hard struggle for the freedom and independence of his people.

Although in the Soviet history Kenesary Khan is pointed out as a robber and cruel leader, but for Kazakhstan he will always remain a great Khan and a fighter for the freedom of the people, because this man was one of the first who sought independence and complete freedom for his country. That is why it is important for people to remember people like Kenesary Kasymov, and to take an example from them.

Kazhymukan Munaitpassov
Kazhymukan was born on April 7, 1871. Father Kazhymukan was MunaiTas Ermakov, lived modestly and in poverty, but was physically strong and often even win in fighting games. They say that there is a legend about Kazhymukan’s grandfather that he had incredible strength and could even pull out a tree right from the root.

Thanks to his genes, Kazhymukan became the first Kazakh to become a world champion in French wrestling, as well as a multiple winner of world, regional, Russian, and later all-Union Championships in classical wrestling among heavyweights.

Kazhymukan was a real Kazakh hero and had extraordinary strength. As the champion himself said:
“The goal of the fight is not to win or lose. It is about standing in the narrow space of the arena in front of a thousand people, fighting for their happiness. Movement is an external pattern of struggle, and the main content is not to let difficulties overcome you. The process of knowing the struggle is in the struggle itself”

Birzhan-Sal Karagulle – known Kazakh poet and composer. He became a popular singer at an early age, as he had an unusual vocal ability and excellent skills of playing the dombra.

Birzhan-Sala’s work was mainly devoted to the theme of love, his songs “aitbay”, “Gashygym”, “Gashyk Zhar”,” Laylim-Shyrak ” about love. Most of Birzhan’s compositions are processed for orchestras and choirs. His works are performed by famous artists from different parts of Kazakhstan.

Birzhan-Sal was a unique master of aitys. His poetic competition with Sara Tastanbekkyzy has gone down in history as a classic of this genre.

He was a noble leader of the Kazakhs in the 18th century. He not only participated, but was the organizer of national liberation battles against the Dzungarian invaders, and was also a commander and one of the main advisers of Abylai Khan.

Kanay Bi died as the head of the city of Tashkent and was buried next to Abylai Khan.

In honor of him, Chapaev street in Kokshetau was renamed Kanay Bi street.

Malik Gabdullin
Malik Gabdullin is known to the world as a Kazakh Soviet scientist-teacher, writer, honored scientist of the Kazakh SSR, doctor of Philology.

The hero of the Soviet Union was born on November 2, 1915 in a poor family with many children. At the age of 14, he graduated from the Kazakh school for seven years, and in 1931 went to study in Alma-ATA, where at the age of 20 he became a graduate of the first University in Kazakhstan. Many years later, M. Gabdullin will head the University, becoming its rector.

In 1936, Gabdullin was recruited into the red Army, where he served for a year in a cavalry regiment.

Central streets are named after him in the cities of the Republic, and his name is assigned to a farm in the Zerendinsky district of the Akmola region. The Malik Gabdullin Museum was created in Kokshetau.

Ilyas Esenberlin
This is the greatest writer who gave us the book-trilogy “Nomads”.

Ilyas Esenberlin was born in 1915 in the city, but spent his entire childhood in an orphanage. After finishing primary school, the writer went to Kyzylorda, where he studied at a boarding school and got a job. Later, he moved to Almaty and became a student of the Mining and Metallurgical Institute.

In 1940, he was drafted into the red Army and awarded two medals — “for military services” and”for the defense of Leningrad”.

After the army, Ilyas began to try his hand at creativity, he writes poems and poems, gradually switching to historical themes.: “Khan Kene”, “the Enchanted sword” and “Despair”, which made up the famous” Nomads ” trilogy, which covers the events that took place in the Kazakh steppe from the 15th to the middle of the 19th centuries.

In 1979-1983, the writer wrote the Golden Horde trilogy, consisting of the novels “six-Headed Aidakhar”, “Six heads of Aidakhar” and “the Death of Aidakhar”, which tells about the origins of the Kazakh nation.

The work of Ilyas esenberlin has been translated into many languages of the world and released in millions of copies.

Streets in Astana and Almaty bear his name, gymnasium No 25 in the center of the southern capital is named in his honor, as well as gymnasiums and streets in the hometown of the outstanding writer.

The young Baluan was nicknamed Sholak, which meant “fingerless fighter”. The fact is that the young wrestler had great strength, but he had no fingers on his right hand.

At 35 years old, he could hold a log with twenty jigs on his shoulders, participated in competitions and won the most famous wrestlers.

The songs of Baluan Sholak were widely known throughout the Akmola region, but “Galiya” was especially popular – a song about bright beautiful feelings and love.

Sagadat Nurmagambetov
Sagadat kozhakhmetovich is the first Minister of defense of the independent Republic of Kazakhstan, has the title Hero of the Soviet Union, people’s Hero of Kazakhstan.

He was born on may 25, 1924 in the village of Trudoy in Akkol district. He graduated from only 7 classes, as from school he was drafted into the Red Army and sent to a military school in the city of Kushka in Turkmenistan. After graduating from training in April 1943, he fought on the fronts of the great Patriotic war. Until may 1945 he was commander of a machine-gun platoon commander of the machine gun company commander, infantry battalion in the 1052 part of the th infantry regiment 301 of Donetsk order of Suvorov II grade Berlin infantry division of the 5th shock army. Participated in the liberation of Krasnodar territory, Ukraine, Moldova, Western Belarus, and Poland.

Sagadat Nurmagambetov’s battalion ended the war in Berlin and participated in the storming of the Reich Chancellery of Hitler. In November 1995, our outstanding countryman retired with the rank of General of the army, after which he was an adviser to the President of the Republic of Kazakhstan.

In 1999, the name of General Nurmagambetov was given to the Republican school “Zhas Ulan” in Astana, which was created for in-depth study of state and foreign languages, military disciplines, as well as enhanced physical training. The famous military man died at the age of 89 in 2013 in Almaty and is buried there.

During the development of virgin land, he was able to become one of the first leaders of the Republic. Zhumabek Tashenov actively opposed the project of creating a Virgin territory in late 1960 with the unification of five regions of Northern Kazakhstan and the possible separation of the region from the Kazakh SSR.

After that, Zh. Tashenov served as an adviser to the Executive Committee of the South Kazakhstan region. The party authorities did everything possible to prevent him from engaging in politics again and being close to these circles. A great man died in Shymkent in November 1986, a month before the December events.

On may 25, 1999, the maslikhat of Astana decided to rename the capital’s Polevaya street in honor of Zhumabek Tashenov. In addition, in the cities of Almaty, Shymkent, Kokshetau and the village of Arshaly, Akmola region, streets are named after Zhumabek Tashenov.

Participated in world war II. During the two years of the war, Begeldinov made about 305 sorties on a ground attack aircraft to defeat enemy ground forces, and shot down 7 German aircraft in air battles.

On October 26, 1944, senior Lieutenant Begeldinov was awarded the title Hero of the Soviet Union for his bravery and combat skills during the liberation of the cities of Znamenka and Kirovograd, and for personally shooting down 4 enemy aircraft in air battles. Talgat Begeldinov was honored to participate in the Victory Parade on June 24, 1945 for special services.