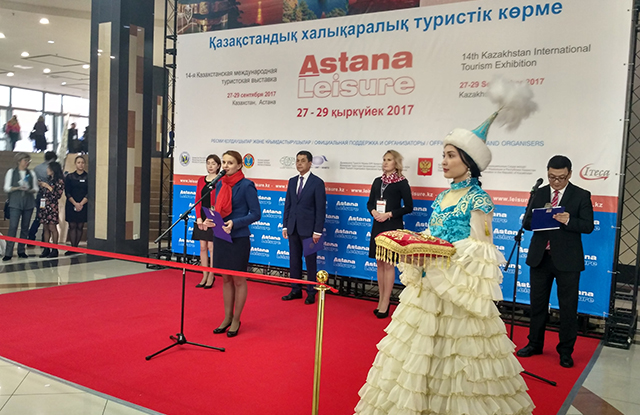 In the period from 27 to 29 September this year, the main tourist event in Kazakhstan “Astana Leisure – 2017” took place in the exhibition center “Korme”. The 14th Kazakhstan international exhibition brought together leading professionals of the tourism industry, representatives of state bodies and public organizations, media, residents and guests of the capital. The exhibition was attended by more than 100 companies from 11 countries, such as the United Kingdom, Hungary, Vietnam, Germany, Egypt, Kazakhstan, Korea, Russia, Slovenia, Thailand and Ukraine.

The unified Astana CityPASS tourist card was also presented at the tourist exhibition. The CityPASS Kazakhstan project was launched in June 2017 with the support of the Ministry of culture and sports of the Republic of Kazakhstan and the mayor’s Office of Astana represented by Astana Convention Bureau LLP.

The Astana CityPASS tourist card provides many benefits for visiting attractions and other services, allowing tourists to significantly save money and time. Since the official launch, more than 25,000 tourists have visited Astana using a single tourist card.

Astana CityPASS includes a guide in 4 languages (Kazakh, Russian, English, Chinese) with a description of all the objects, a Beeline SIM card with a favorable tariff plan “Welcome” and a city map with the location of objects and useful information.

With the help of a smart card, a tour of the city on double-Decker buses, free entrance to the national Museum of the Republic of Kazakhstan, the monument “Astana-Baiterek”, “Oceanarium”, “Ferris Wheel”, as well as special offers and discounts of 15% from more than 30 best institutions of the city are available for 72 hours.

It is also worth noting that CityPASS Kazakhstan and the city tourist program “Guest Map of Saint Petersburg” signed a Memorandum of understanding and cooperation between the two cities of Russia and Kazakhstan in the field of tourism.

In December 2017, it is planned to launch a single tourist card Almaty CityPASS.